As the pros head to the Home of Golf, Oddschecker's Tom Jacobs has a handful of players in mind to succeed in Scotland

The DP World Tour returns to the Home of Golf this week for one of everyone’s favourite tour events, the Dunhill Links Championship. A true test of links golf, set over three iconic courses and featuring a list of top quality past winners that highlight the merit of this competition, there is a strong field assembled. I’ve whittled it down to a handful of players I’ll be backing to go close. But first…

Course summary: It is difficult to describe with words the beauty of the three courses on offer for this week’s event, as they truly showcase and celebrate everything that is incredible about Scottish golf. The Old Course, used twice over the course of the week including the final round, is the true home of golf. The closing stretch will test even the best of players, with wind certain to be a factor at all three venues. Links golf form, and an ability to plot your way around venues that offer very different challenges is essential, with British and Scandinavian golfers tending to do well at this event in recent years. 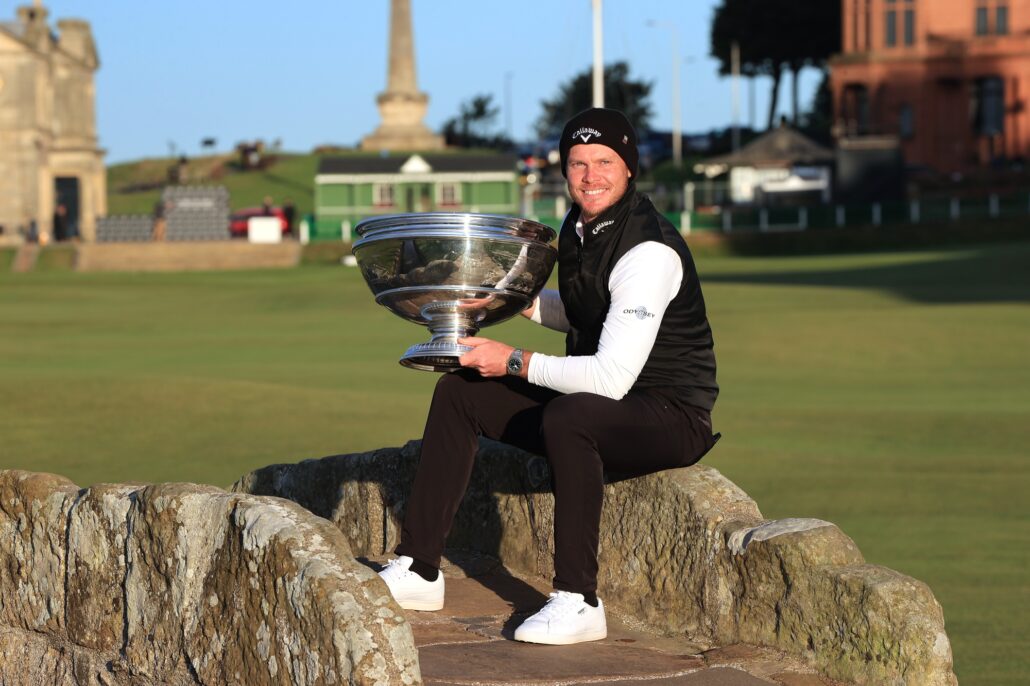 What is there to say about Tyrrell Hatton at the Alfred Dunhill Links Championship that hasn’t been said already? Well, not much really, so apologies for rinsing and repeating the same information, but it is still relevant.

Hatton missed his first three cuts at this event, after also missing the cut at the 2010 Open Championship, so he had no love for St Andrews early on. That all changed in 2016, when he won for the first time beating Richard Sterne and Ross Fisher by four strokes, in a complete performance. He was 5th after each of the first two rounds and then shot 62-66 over the weekend to lead after both of the final rounds.

Fast forward 12 months, and Hatton was back to defend his Dunhill Links title, this time winning by three strokes against a familiar victim in Fisher. Since then he has finished 2nd twice, giving up a 54-hole lead to Danny Willett last year, and in between those runners-up finished 15th. He then added an 11th place finish at the Open earlier this year.

After a decent finish to the PGA Tour season and an 8th place finish last time out at the Italian Open, Hatton is ready to win again, for the first time since the start of 2021, looking for a third win on his favourite course(s).

Rasmus Hojgaard is a three-time winner already on the DP World Tour, twice winning in a playoff and that is a huge start to a 21-year old’s career. He gave up a three-stroke lead at the 2021 Cazoo Classic, and just last week he was trumped by a final-round 62 from Guido Migliozzi, in what was a similar final-round performance to his own at the 2021 European Masters. He knows what it feels like to pip a deserving winner then, so if he takes the positives from last week instead of dwelling on the outcome, he could come back with a vengeance this week.

The Dane could easily be a five-time winner on the DP World Tour already, and its that winning pedigree that leads me to believe that he can step up this week at the Dunhill Links. Unlike his brother, Nicolai, he hasn’t played in this event yet, but he did finish 10th at the Scottish Open this season, in a superior field to this one.

His last win at the European Masters came the start after his collapse at the 2021 Cazoo Classic, and his 2020 UK Championship win came after finishes of 2nd, 6th and 3rd so he’s clearly a player that keeps runs of form going, and can put disappointing results behind him.

Last week’s numbers will tell you he ranked 35th in SG Approach, but he was 1st in that category in round 1, 7th on day two and 4th in the final round, it was just on Saturday when he lost a bunch of strokes on one hole, that affected his overall numbers.

The odds are too big for someone of his winning ability.

Next up is Hojgaard’s compatriot, Thorbjorn Olesen. Unlike Hojgaard, we know exactly what Olesen’s upside is on this course and that is a victory and a runner-up finish, so there’s already a lot to like.

Add in the fact that Olesen was 1st in SG Tee-to-Green and 7th in Approach last week, in what was his second top-10 approach week in four starts, there’s reason to believe Olesen can go on and win again in this event.

Like his fellow Dunhill Links winner, Hatton, Olesen has won six times on the DP World Tour and four have come in big events like this, the Italian Open, the Turkish Airlines Open and the British Masters. He comes to play when the stakes are high and this set of courses have been good to him in the past and should be again, when in this form.

I cannot believe I am still able to type “long shot” next to Ewen Ferguson’s name. He has won twice already this season, was unlucky not to win in Himmerland when Oliver Wilson dropped a huge birdie putt in the closing stages, and earlier in the year, he had already thrown away a four-stroke lead on Sunday at the Kenya Open.

That means Ferguson was in a position to win four times this season, and its not even over yet. The first of those wins came at the Qatar Masters where the conditions get tough and he may face that again this week, in a part of the world where wind and rain can cause havoc.

Two years ago, Ewen Ferguson finished 17th here, but he was inside the top-9 in each of first three opening rounds and he should know how to play better on Sunday this time around.

Take a chance on a Scot playing at home, at the tail end of what has been a fairy-tale season.

The ‘Other Fitzpatrick’. At his best, Alex Fitzpatrick reached World No 4 in the Amateur Rankings and now he will look to climb up in the professional ranks, following in brother Matt’s footsteps.

He’s made a good start as well, after turning down LIV, Fitzpatrick headed to Canada to play, after missing the cut at the Irish Open, but it is what he has shown in the last two starts which gives reason for optimism.

Alex finished 27th at the Italian Open without his best ball striking, but last week improved greatly in that department, ending the week ranked 11th in SG Approach and 9th in SG Tee-to-Green, en route to a 13th place finish. He was never outside the top-16 all week, and while contending in this event might require a further step up once again, I see no reason why he couldn’t follow in the footsteps of someone like Matthew Jordan who finished 5th here, when he also didn’t yet have DP World Tour status.

Take a chance on Fitzpatrick now, before his odds start to fall.