As footage of the so-called 'tee-gate' emerges, Rory McIlroy and Patrick Reed have had their say after a prickly altercation in Dubai

It’s the viral incident of which nobody can get enough. And now, less than 24 hours after the most hilarious exchange between Rory McIlroy and Patrick Reed transpired at the Hero Dubai Desert Classic, the two protagonists have weighed in on the drama – and the feud just got a whole lot juicier.

We are, of course, talking about ‘tee-gate’ – at least that’s what the kids are calling it – the prickly incident between the former Ryder Cup foes which saw Reed toss a tee at McIlroy for snubbing him on the range at Emirates Golf Club.

So what exactly happened? Well, fortunately we now have some clarity after Ten Golf released footage of the altercation after a day of teasing of us all – and it’s even worse than we thought…

“It’s definitely a storm in a teacup.”

Thank goodness Rory McIlroy is okay after this! 🙏🏻 pic.twitter.com/pHIohg0IC0

OK, Reed hardly ‘launched’ the tee as first reported, but McIlroy unquestionably gave the LIV star the cold shoulder as he attempted to say hello.

Unsurprisingly, the pair have since been peppered with questions about the viral clash as they prepare to tee up in Dubai. First up was McIlroy, who hit back at Reed’s antics by claiming that “if the roles were reversed – I’d be expecting a lawsuit.” Yikes.

“[It was] nothing,” the World No 1 explained. “Patrick came up to say hello and I didn’t really want him to. From my recollection, that was it. I didn’t see a tee. I didn’t feel a tee. Obviously someone else saw that. But it’s definitely a storm in a teacup. Obviously nothing – I can’t believe it’s actually turned into a story. Yeah, it’s nothing.

“I didn’t duck. I didn’t see it, no. My back was turned to him. I was down by my bag and he came up to me, and I was busy working and sort of doing my practise, and I didn’t really feel like… I didn’t feel the need to acknowledge him.

“So I didn’t see a tee coming my direction at all, but apparently, that’s what happened. And if roles were reversed and I’d have thrown that tee at him, I’d be expecting a lawsuit from him.” 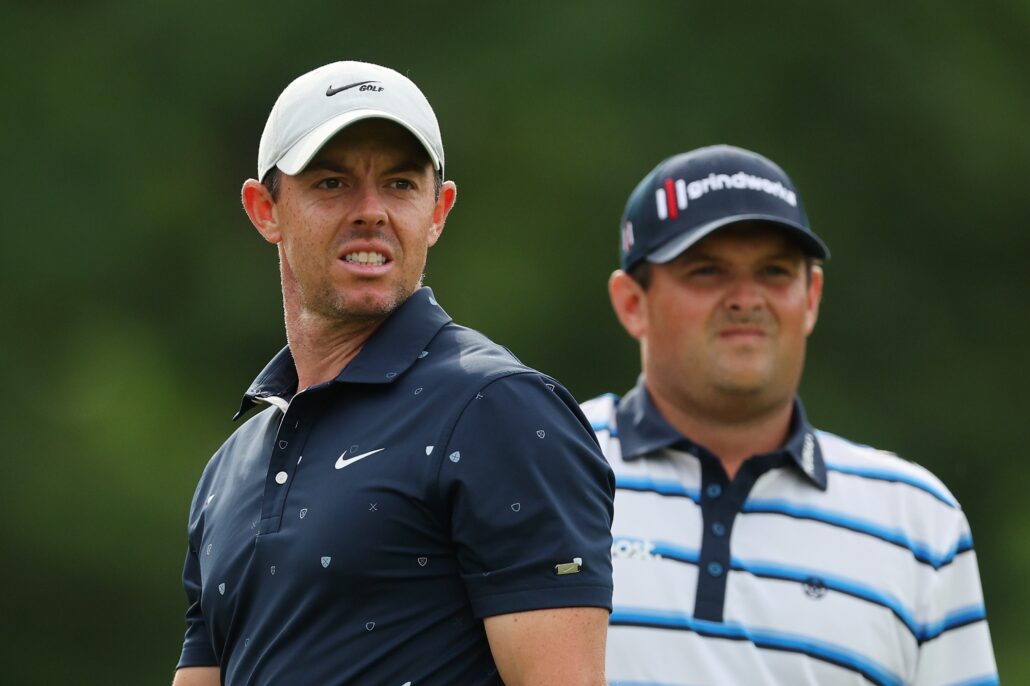 The comments come amid Reed continuing to seek legal action against a plethora of media outlets and journalists over a series of defamation claims. On top of this, the LIV Golf star was previously a part of his circuit’s antitrust lawsuit against the PGA Tour, and is further entangled in legal matters with the DP World Tour over a potential ban which will be decided in February.

So McIlroy explained his side of the snub of all snubs.

“I mean, I got a subpoena on Christmas Eve,” the Northern Irishman said. “You can’t pretend like nothing’s happening, right. I think that’s the thing. Like, why? We are living in reality here.

“[I’m] trying to have a nice time with my family and someone shows up on [my] doorstep and delivers that, [I’m] not going to take that well.

“So again, I’m living in reality, I don’t know where he’s living. If I were in his shoes, I wouldn’t expect a hello or a handshake.”

Rory McIlroy plays down talk of a confrontation with Patrick Reed ahead of this week's Hero Dubai Desert Classic. pic.twitter.com/awCQgVcBzY

Of course, Reed weighed in – and he offered a slightly different take on the incident. The 2018 Masters champion explained how his rival acted “like an immature little child”, causing him to toss one of his LIV Golf tees down as a “funny shot back”.

“Because of the relationship I’ve had with Rory, Reed told the Daily Mail. “Let’s be honest, we’ve had some great battles at Augusta and other tournaments and our friendships been pretty good up until obviously joining LIV – I walked over there and wished [his caddie] Harry [Diamond] Happy New Year and then Rory because it is the first time I have seen them.

“Harry shook my hand and Rory just looked down there and was messing with his Trackman and kind of decided to ignore us. We all know where it came from, being part of LIV. Since my tees are 4 Aces LIV tees I flicked him one. It was kind of a funny shot back. Funny how a small little flick has turned into basically me stabbing him and throwing a tee at him.

“He saw me and he decided not to react. But it is one of those things. If you’re going to act like an immature little child then you might as well be treated like one.”

If the golf gods are real, they’ll make sure these two are paired in the final group on Sunday.