This was Rory McIlroy's chance to make amends – and he even had the perfect alibi. But, writes Alex Perry, it's just another week of what ifs

What is there left to say about Tiger Woods? Fourteen months ago, the man was in a car accident that almost cost him at least one of his legs. On Thursday he carded an under-par round at Augusta, having not played a competitive shot since the 2020 Masters, which was played in November of that year.

The menace wasn’t there. He wasn‘t bombing his drives, his chipping was a bit iffy, and even that famous stride off the tee didn’t feel the same. Quite understandable, of course. But his iron play and putting were still sublime, and the way he plotted his way around America’s most hallowed turf flawless.

Oh how we will miss that roar when it’s gone.

His day was epitomised at the 18th when, having hoiked his drive into the trees on the left, Woods took his medicine, laid up to 70-odd yards, before flicking a delicious wedge to six feet and making the putt to preserve his red numbers.

Given we weren’t entirely sure he was going to even play until Tuesday, no one could have imagined he would have shot a 71, a score that would see him end the day just four off the lead.

So how was it?

“Not easy,” he said, grinning from ear to ear. “People have no idea how hard it’s been.”

But it’s not all been about Woods, and he was quick to praise those who have made this happen.

“My team have worked with me every single day. We haven’t taken a day off since I got out of the bed after those three months.

With the difficult first round back, the plan now is plenty of rest and “lots of ice baths”. Friday is a whole new test. 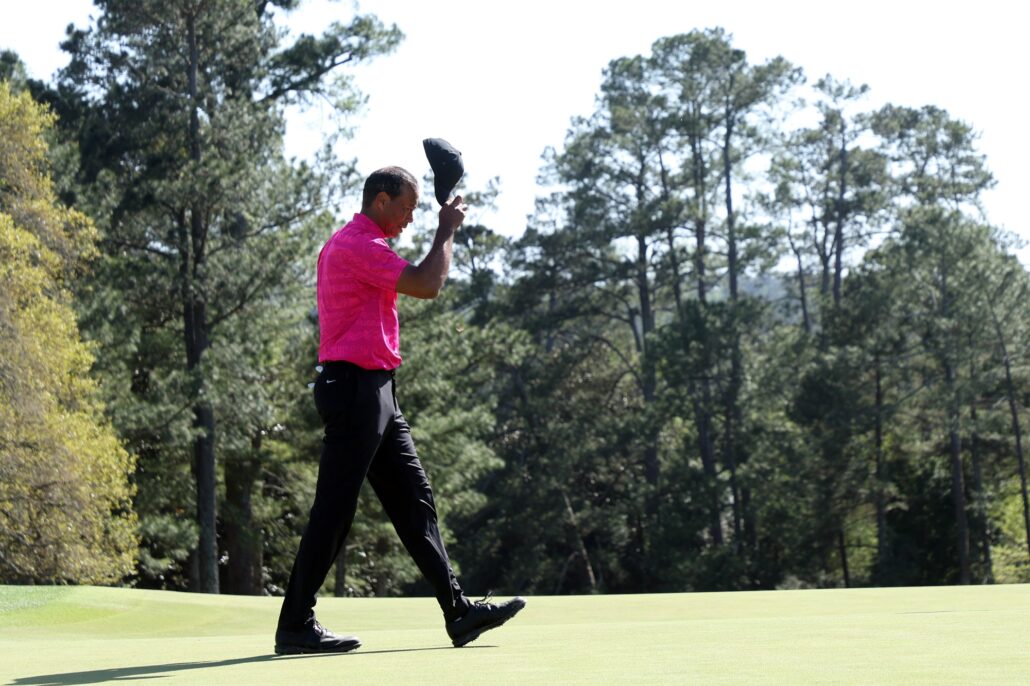 With the entire watching world distracted by Woods’ exploits, Rory McIlroy – playing in one of the last groups – had the chance to sneak under the radar and finally shake that first-round monkey off his back.

The stat, with which we’re all familiar given it gets rolled out four times a year, is that since his last win at the 2014 PGA Championship, McIlroy has not been very good on the opening day of the majors.

Before Thursday he was a combined 34-over-par for the first 18 holes at the Big Four, while a combined 60-under for rounds two to four.

McIlroy said at last week’s Texas Open that he was as excited as anyone about Woods teeing up at Augusta. For the Northern Irishman, though, there was an ulterior motive: the spotlight would be off him.

Indeed, no one was really talking about McIlroy in the build-up to the tournament. A small part of which, perhaps, was an attempt to not jinx anything. Maybe, just maybe, if we ignore McIlroy’s chances and don’t pile that pressure on him that we do every year, he might just relax a bit and unleash.

But mostly it was due to the deafening fanfare that surrounded his good friend.

And it was working, and he was in red until a three-hole spell towards the end.

McIlroy was ticking along nicely at 1-under-par, just four off the lead, when he inexplicably pushed a four-foot par putt wide at 14.

As flashbacks of 2011, undoubtedly raced through his mind, he missed an opportunity at the par-5 15th, then a lazy swing at 16 saw him find the green-side bunker and another bogey. From 1-under to 1-over in barely half an hour. That’s how quickly the Green Jacket can be snatched away from you here.

A 73 means that infamous stat will go up by one more, but it’s not a disaster just yet.

McIlroy is six back and while inexperienced leader Sungjae Im may not be of concern, others certainly will be – notably in-form Cam Smith, newly-crowned World No 1 Scottie Scheffler, defending champion Hideki Matsuyama, and the man he dethroned, Dustin Johnson. Oh, and Eldrick.

But he’s not concerned.

“I’m just pleased that I played well,” he said. “I don’t really care where I’m at on the leaderboard. It doesn’t matter. I played well. I hit the ball great from tee to green for the most part. So I’m pleased with that.

“I hit 12 fairways and 14 greens and just didn’t really get a lot out of the round. I had a putt on 14 to go to 2-under for the day with the par-5 to play, and I three-putt that, and that halted any momentum I had.”

The Northern Irishman is going to need a Woods-like miracle if he’s to put up a fight in what is his eighth bid to complete the Grand Slam.

The odds are stacked against him, but that’s just how he likes it.

So who will win?

Our resident tipsters Barry Plummer and Steve Carroll are keeping you on top of the betting markets this week, but we can start narrowing it down.

According to stats guru Justin Ray, a whopping 76% of Masters champions were inside the top 10 after the opening round. That, intriguingly, cuts the field to the 18 players who broke par on Thursday.

Anything else from day one?

There was a lovely moment when, just before hitting his shot, Watson paused to explain what an honour it was to be joining his old rivals and great friends in the tradition, which will turn 60 next year.

He asked Player how far he had hit his ball. “Well, I heard it land,” the South African quipped. The pair laughed and the world laughed with them.

What a shame Player had to spoil the moment by insisting on wearing a huge Golf Saudi logo on the collar of his shirt.

*absolutely do not respect pic.twitter.com/ipN3c0KjdR

After last year’s exploits that saw his son banned from Augusta National for hawking his merch during an emotional ceremony with the now late Lee Elder, you’d think he would have learned his lesson…

If you missed it, you can watch the Honorary Starters get the 2022 Masters underway here:

Watch the Honorary Starters, a tradition dating to 1963. #themasters https://t.co/76PHbGLPQa