The Slam: It's been a history-making week on tour – for the right and wrong reasons

It was a remarkable weekend of major action, while Louis Oosthuizen just cannot catch a break. Alex Perry wraps up the action

Hello. Welcome to this week’s Slam – and it was a remarkable week at the Evian Championship and Senior Open, as well as the regular tours. There’s an awful lot to get through – so let’s dive straight in…

Jon Rahm and Bryson DeChambeau made no secret of their excitement to represent Spain and the United States respectively at the Olympic Games. Alas, neither will be in Tokyo after both tested positive for Covid-19.

DeChambeau is replaced by Patrick Reed, who was third alternate behind Brooks Koepka and Patrick Cantlay, who both turned it down.

The Spanish Olympic Committee, meanwhile, decided Rahm will not be replaced: “With no real time to find a replacement and comply with all the medical protocols required at the Olympic Games, Spanish golf will only be represented, in the men’s category, by Adri Arnaus.”

The World No 1, who was forced to pull out of the Memorial Tournament for the same reason despite holding a huge 54-hole lead, reacted in a typically sophiscated manner of which we have become accustomed.

Before this week’s Evian Championship, only one player had carded a round of 61 in a major. Now it’s three.

Jeongeun Lee6 and Leona Maguire each carded a round of 10-under-par at the Evian Resort in the second and fourth rounds respectively.

Jeongeun Lee6 has tied the lowest round in major history at the Evian Championship 🤩pic.twitter.com/9LCOmalTEu

Maguire, who will play for Ireland in Tokyo, went on to finish in T6.

Remarkable scenes at the Evian Championship as @leona_maguire posts the second 61 of the week and the third in major championship history.

Lee6, the 2019 US Women’s Open champion, lost in a play-off to Minjee Lee, who picked up her first major championship title.

A 7-under masterful performance put on by @minjeegolf.

Watch her final round highlights 👇 pic.twitter.com/wKJKlLVQkR

Lee is also the ninth straight first-time major champion in the women’s game, and the 14th of the of the last 15.

She also came from seven behind to win, tying Patty Sheehan at the 1983 PGA and Karrie Webb at the 2006 ANA Inspiration.

64 for Minjee Lee today, tying the third-lowest final round score by a major champion in LPGA history.

Her 7-shot final round comeback ties the largest to win any women's major. She was bogey-free her last 29 holes including the playoff.

Doddy’s day in the Sun

The Senior Open also took place this week at the splendid Sunningdale – and what a leaderboard we ended with in Surrey.

Miguel Angel Jimenez, Darren Clarke, defending champion Bernhard Langer and Paul Broadhurst all finished in the top five, but it was Welshman Stephen Dodd who topped the lot after a birdie at 18 was enough for a one-shot lead.

The moment the dream was realized.pic.twitter.com/UZXTDtPdbt

Incredibly, Dodd – a three-time European Tour champion – had one played in one event in the 18 months prior to the Senior Open.

While Dodd takes the title, it was 2018 champion Jimenez who provided the moment of the week when he holed a slam-dunk albatross on Saturday that needs to be seen to be believed.

Hit a bomb drive off the 1st. 147 yards left for my second – just a 9 iron. As soon as I hit it I knew it was good, it never left the flag. What a great sound – slam dunk albatross. No better way to start the round. Perfecto ! 💥

Remarkable stuff from the flamboyant Spaniard.

Cameron Champ shot a final-round 66 to win his third PGA Tour title at the 3M Open.

Champ fired this remarkable approach to 18 on Sunday to set up a tap in for a two-shot win over Jhonattan Vegas, Charl Schwartzel and – who else? – Louis Oosthuizen.

CLUTCH.@Cameron__Champ will have 2 feet to win it after a DART at 18! 👏 pic.twitter.com/bhd6ihlPqz

For Oosthuizen, his Open win in 2010 remains his only PGA Tour title, and he has also extended these rather unwanted records…

Still, sure the millions of dollars in prize money will make up for it.

It’s been the year of veteran first-time winners and joining Richard Bland in the European Tour winners’ circle is Nacho Elvira after he lifted the Cazoo Open.

The Spaniard didn’t make life easy for himself at the Celtic Manor. With two putts to win from 18 feet on the 72nd hole, Elvira left himself a three-footer than he never even gave a chance.

The bogey meant he fell into a play-off with clubhouse leader Justin Harding, who had a three putt of his own at the first extra hole and Elvira is a European Tour winner at the 195th attempt.

Right, you’re up to speed.

Enjoy your week, whatever you’re up to. 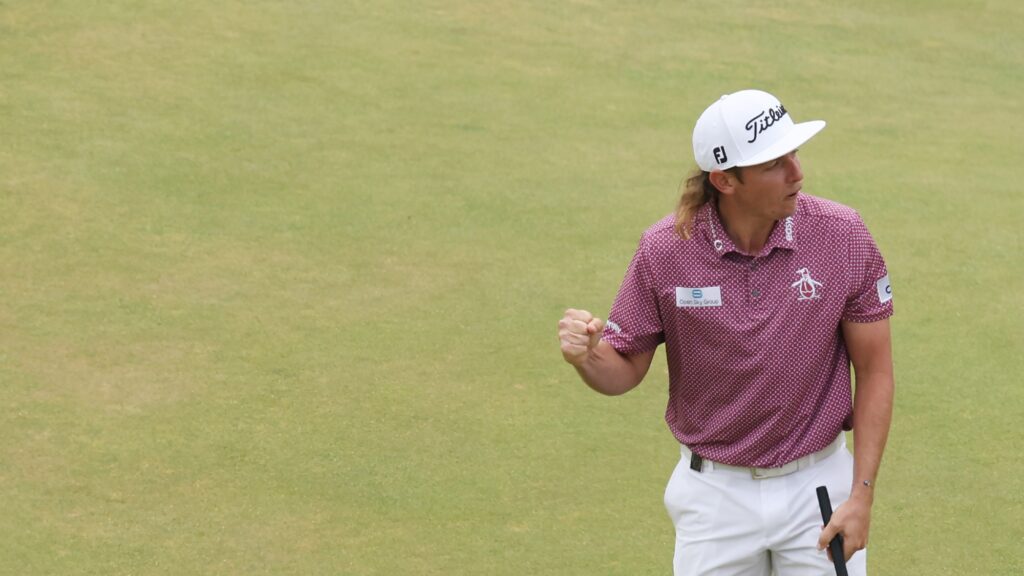 Smith all but confirms LIV switch after fiery comment!