Cameron Smith may have spoiled the party, but it was clear who the fans were there to see. Hannah Holden and George Cooper went to join the carnage

My word. Talk about rewriting the script.

As far as final days go at a major, the last round of the 150th Open was up there as one of the most exhilarating, spine-tingling, outright stunning finales in the history of the sport.

It had it all as Cameron Smith stunned a Rory McIlroy-adoring St Andrews by playing the perfect round to pip the Northern Irishman and land his maiden major.

And lucky for you guys (well, mostly us), we were on the ground to bring you all the sounds and sights from a spectacular Sunday at the Old Course. Let’s get stuck in…

‘Don’t count our man out’

It’s safe to say a McIlroy win meant almost as much to the fans as it did to their hero.

All the chatter before the day was about Rory, Rory, and a little bit more Rory. It wasn’t even 10am, and lines of punters lucky to land a ticket were queuing at every grandstand, etching to get a glimpse of the man himself…

Wild queues for the grandstands already 😳 “who are you here to see?”

It was obvious who everyone wanted to win. Well, almost everyone…

Turns out not *everyone* is here for the Rory x Viktor showdown…👀🇦🇺 pic.twitter.com/xz2YyHDym6

These lucky lads had magnificently made the journey all the way from Sydney to see their Aussie ace – soon shutting me down when I cheekily asked who, out of McIlroy and Viktor Hovland, would claim the Claret Jug?

“Don’t count our man out. He only needs to post a low one.”

How we should have listened.

Three hours later the leaders set off, and, even with thousands gathered on the 1st, you could have heard a pin drop when McIlroy addressed the ball – reminiscent of what was to come 17 holes later…

All of the leaders’ ball striking under pressure was remarkable. In the same situation, we’re not sure we would have made contact with the ball…

The fans clearly relished the opportunity McIlroy faced, but, as more and more birdie putts slipped by the way, the tension in the crowd were evident. Such nerves only seemed to feed into Rory’s stroke, chance after chance passing by.

Then, on the 12th, chaos. As McIlroy approached the tee, an increasingly rowdy crowd breached past security… 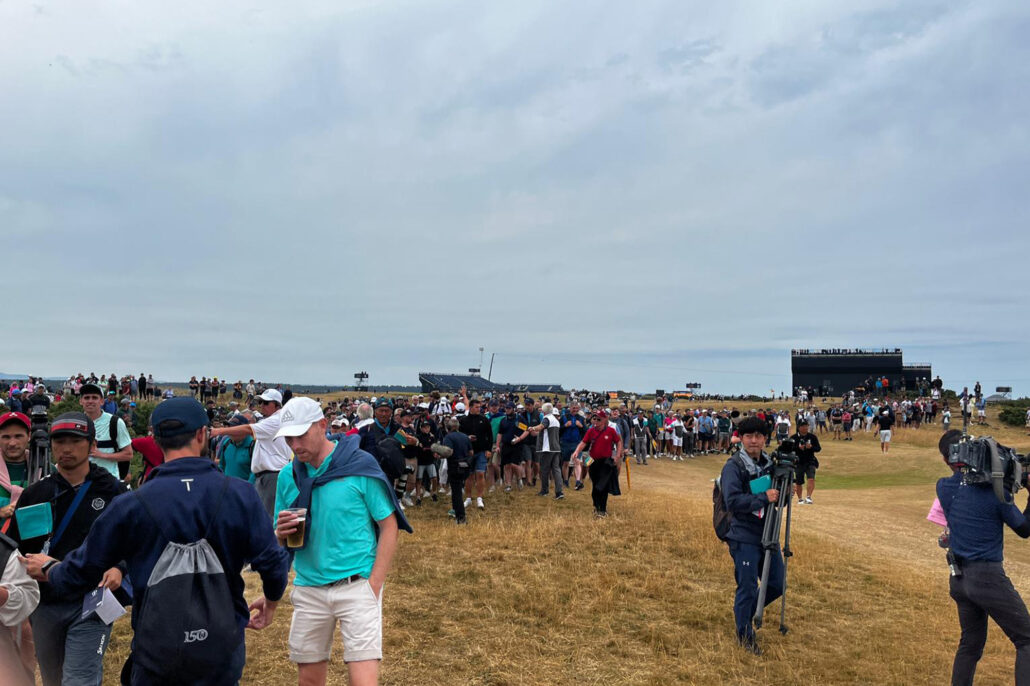 Marshals eventually ushered them away in exchange for some verbal abuse. Fortunately this guy was on hand to calm many a folk down…

Only at St Andrews… #TheOpen pic.twitter.com/XZ1KcF6z7I

Back to the drama, and Rory looked looked suitably unimpressed after the incident. Did a tetchy crowd hinder McIlroy’s quest to claim the coveted title?

Ever gracious in defeat, he rebuked any such excuse.

“Not really,” he said afterwards. “I thought the fans were great today. Unbelievably supportive. [I] wish I could have given them a little more to cheer about. There’s a worthy winner right on the 18th green right now.”

The Hollywood walk down 18

Eventually we made it to the famous 18th – probably the most iconic closing hole in golf. Roar after roar bellowed behind us, as it was eventually made clear that after his specular birdie run on the back-nine, Smith was now in position to claim the Claret Jug.

Would should have been an electric walk down the last for Smith was surprisingly solemn in comparison to the scale of achievement, the realisation and shock suddenly hitting everyone that the script had, in-fact, been re-written.

“Come on mullet man,” hilariously shouted one fan as Smith attempted his eagle-putt.

Then it was Rory’s turn, and well, utter goosebumps. Every man, woman and dog had now made it to 18th as McIlroy needed an eagle to force a play-off.

“Come on Rory, you’re made for this moment” ushered one fan next to me.

“We’re not supposed to be bias, are we? But I just can’t help it,” said one media personnel, followed by the ever-present chants of “Rory, Rory, Rory” which had become a staple of St Andrews all week.

After sending the chip long, it was a pin-drop moment once again. Sheer shock all round – this great championship now stunned that their man couldn’t get it over the line. But take nothing away from Smith, who in the end deserved the prestigious prize…

The crowning moment. What a tournament. What a player. 🏆 #TheOpen
pic.twitter.com/YLGobRDsoP

One final passing thought from Hannah Holden after this memorable week:

Although the experience of walking with Rory’s group was incredible, it also felt uncomfortable at times. The amount of people inside the ropes and the volume of cameras tracking his every move ultimately felt excessive. Perhaps The Open needs to follow The Masters by having a no phones, no inside the ropes rule…