Phil's back! Breaking down one of the most bizarre interviews you'll ever see

Well, Phil Mickelson is back. And how.

Having been LIV Golf‘s mouthpiece for so long, Lefty has had – for him – a relatively quiet summer, choosing instead to let Dustin Johnson, Bryson DeChambeau, Patrick Reed and others make a lot of noise. Each Greg Norman capture and each bitter ranking points controversy took golf’s so-called civil war to turbulent new heights while Mickelson just watched on from afar.

But now, the man who was a pivotal instigator in getting this much-maligned league up and running is back behind the microphone, dropping different kinds of bombs than we’re used to seeing from the six-time major champion.

In what can only be described as one of the most surreal, ludicrous, and uproarious press conferences, certainly in recent memory, Mickelson took the stand before LIV Golf Jeddah and created headline upon headline in pursuit of defending his new turf.

Let’s try and break it all down…

He’s been the king of keeping tight-lipped on the PGA Tour front ever since they embarked on a war with LIV Golf. But now – perhaps ignited by a recent string of improved performances in the breakaway league – Mickelson made it perfectly clear what he thinks of Jay Monahan with this all-out assault…

“And I firmly believe that I’m on the winning side of how things are going to evolve and shape in the coming years for professional golf.

Phil Mickelson some insight on the current state of professional golf, #LIVGolf, and more:

"And I see LIV Golf trending upwards, I see the PGA TOUR trending downwards and I love the side that I'm on" pic.twitter.com/cYnvQ9nM4K

Ouch. No wonder Lefty pulled the plug on wanting to return to the American circuit.

Not content with torching his former pals in Ponte Vedra, it was the onto the LIV Golf love train, where Mickelson romanticised about Norman’s league…

“I love the way they involve us and listen to us in decisions. I mean it’s so inclusive, it’s so fluid that things, LIV Golf is leading. Whether it’s shorts, whether it’s other aspects of professional golf that are going to change and evolve, those positions will be led by LIV.”

Someone pass the bucket. 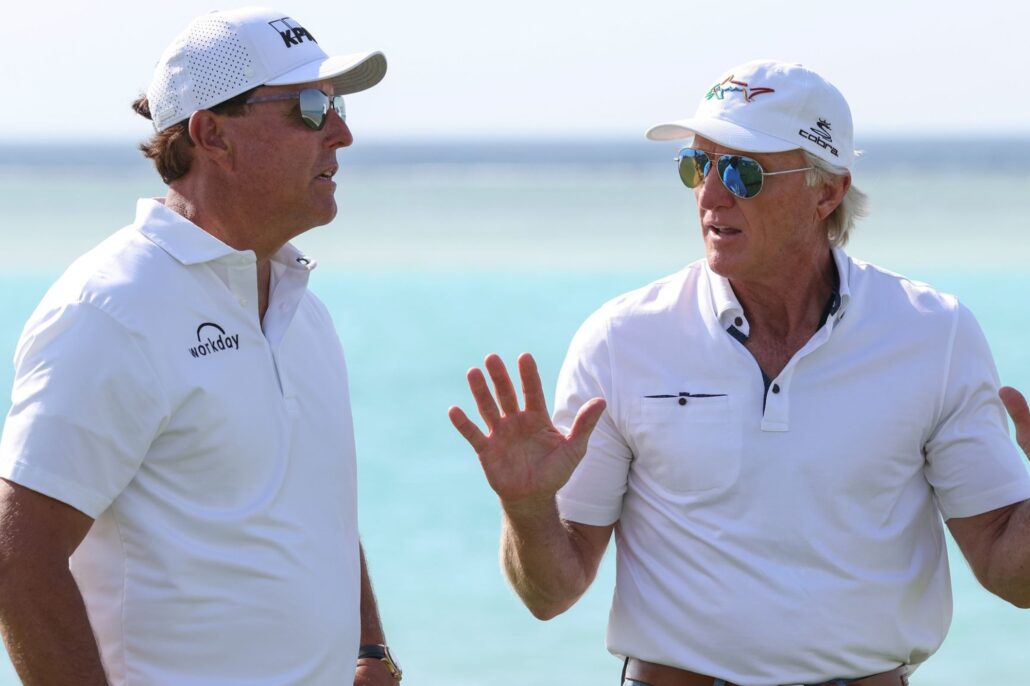 Now onto the drama, and the bombshell which has had everyone thinking, ‘Wait, what?’ over the past 24 hours. Back in February, Mickelson’s “scary motherf***ers” comments about Saudi Arabia sent shockwaves across the golf world when journalist Alan Shipnuck published his notorious interview with the left-hander.

But now – having already retreated to saying the interview was “off the record”, Mickelson has gone one further, denying there was an interview with Shipnuck altogether…

“I will reiterate, I never did an interview with Alan Shipnuck. And I find that my experience with everybody associated with LIV Golf has been nothing but incredibly positive and I have the utmost respect for everybody that I’ve been involved with.”

With everyone speculating who’s right and wrong, Shipnuck was then forced to respond to the controversy as the saga continues…

Per Phil's comments in Saudi Arabia, it is classic Mickelsonian bullshitery. He is playing semantics, as always. I've discussed our freighted phone call so many times already i'm gonna let my man Bamberger set the record straight this time…https://t.co/9buyem1YBm

And finally, as if the press conference couldn’t get any wilder, Mickelson was also dropping all this heat while simultaneously rocking the worst tattoo we think we’ve ever seen…

So Phil Mickelson got a henna tattoo of his own logo… pic.twitter.com/IxfrM002dU

“It was supposed to be this [pointing to his logo]. Didn’t really turn out that way. It’s not permanent though. So it was just something we had last night at the dinner there. There was some people making little painting on little henna tattoos, so I went for it.”

Whatever your thoughts on LIV Golf, it sure has been one hell of a ride. And it’s only just started.