Phil Mickelson made all sorts of history in winning the PGA Championship last time out. Alex Perry recalls an absorbing final day at Kiawah Island

There was a fun tale doing the rounds ahead of the final day of last year’s PGA Championship. Brooks Koepka, as a child, said he found his way into the car park at the Masters and asked Phil Mickelson for an autograph. “He said no,” Koepka explained. “Probably the only kid Phil has ever turned down.”

When asked about it, Mickelson quipped: “Yeah, well he shouldn’t have been there. I told him that, too.”

That snubbed youngster has grown up to be an ice-cold killer – on the golf course, that is – and on a warm Sunday at Kiawah Island found himself with an opportunity to right the wrongs from Augusta all those years ago.

Very few words were spoken on the first tee. A simple nod is often more than enough in these situations. “Please welcome our 2005 PGA champion – Phil Mickelson,” the announcer boomed into his microphone. Mickelson’s beaming smile appeared, and he tipped his cap not once, not twice, but three times.

He pushed his tee shot into the first cut. Nothing too concerning.

“Please welcome our 2018 and 2019 PGA champion – Brooks Koepka.” A short bow of the head. Koepka was, as always, not there to make friends. He smashed it down the middle of the short stuff. He then knocked his approach to 12 feet.

Mickelson’s approach found the front of the green and then inexplicably failed to get inside Koepka’s ball with his first putt.

He might have been regretting his actions some 20 years previous when his one-shot lead flipped into a one-shot deficit on the with just one hole completed. Karma was tapping on his shoulder.

Thirteen minutes into the final round and it felt over.

Mickelson, at 50 and looking to become the oldest winner in the 161 years of major championship golf, couldn’t possibly keep up with a man 20 years his junior and already looking for his fifth – a number that would have seen him tie his rival.

But we’ll never learn, will we?

Mickelson was one behind on the second tee. By the time he arrived on the third he was two ahead. Are you not entertained?

Then, at the fifth, came the defining moment. A moment you sensed you would be seeing over and over for years to come. A moment that made you realise just how good it is to have galleries back.

Mickelson, having found the sandy waste area that skirts the left-hand side of the green, splashed it onto the tiny portion of the dancefloor he could see. One hop, two hops, three hops, in.

It was Mickelson’s “oh my goodness” moment. Or, as it turns out, “Oh my gracious”.

PHIL JUST DID THAT. pic.twitter.com/wA3hu2cNxG

Mickelson would give that shot back at the sixth and Koepka would pull level. But order was restored a few minutes later and Koepka’s challenge faded.

By the time they reached the 12th – it was here that Mickelson dropped three shots in two holes on Saturday to see his lead chopped from four to one – Lefty’s lead was five.

Mickelson pushed his tee shot into the galleries lining the fairway, and it led to an inexplicable sequence that saw a spectator pick up his ball.

Why they would do that at any golf tournament let alone a major is anyone’s guess. But it allowed Mickelson to have a joke with the fans while he waited for a rules official and ease any tension that may have been brewing.

The scenes coming down 18 were chaotic. A stark reminder of what we’ve missed in the past few months. Not that Koepka was enjoying them. “It would have been cool if I didn’t have a knee injury and got dinged a few times in that crowd because no one really gave a shit,” he said later.

Mickelson zipped his approach to within uncomplicated two-putt range and finished his round out in level par for a 1-over 73 for a 6-under 282.

In the end, the margin of victory was two over Koepka and Louis Oosthuizen – who bubbled along nicely but never really looked like making a charge for it. It was the South African’s fifth second-place finish in majors since breaking his duck 11 years ago at St Andrews.

For our champion, though, the win brought all kinds of history. It’s been well documented that he has overtaken Julius Boros as golf’s oldest major champion ever, as well as moving into the six-major club alongside Nick Faldo and Lee Trevino. In the men’s game, only 11 players have won more majors than Mickelson.

But, perhaps most importantly for Mickelson, it brought with it a five-year exemption to the US Open. The one he so desperately craves.

The first of those ended in a tie for 62 at 11-over, 17 shots behind Jon Rahm, while – at the time of writing – Mickelson is taking a hiatus from the game.

He’s already skipped the Masters and has decided against defending his PGA title. A decision is yet to be made on his Grand Slam bid at the US Open. He couldn’t could he? If he did, it would be just about the most Phil Mickelson thing ever. 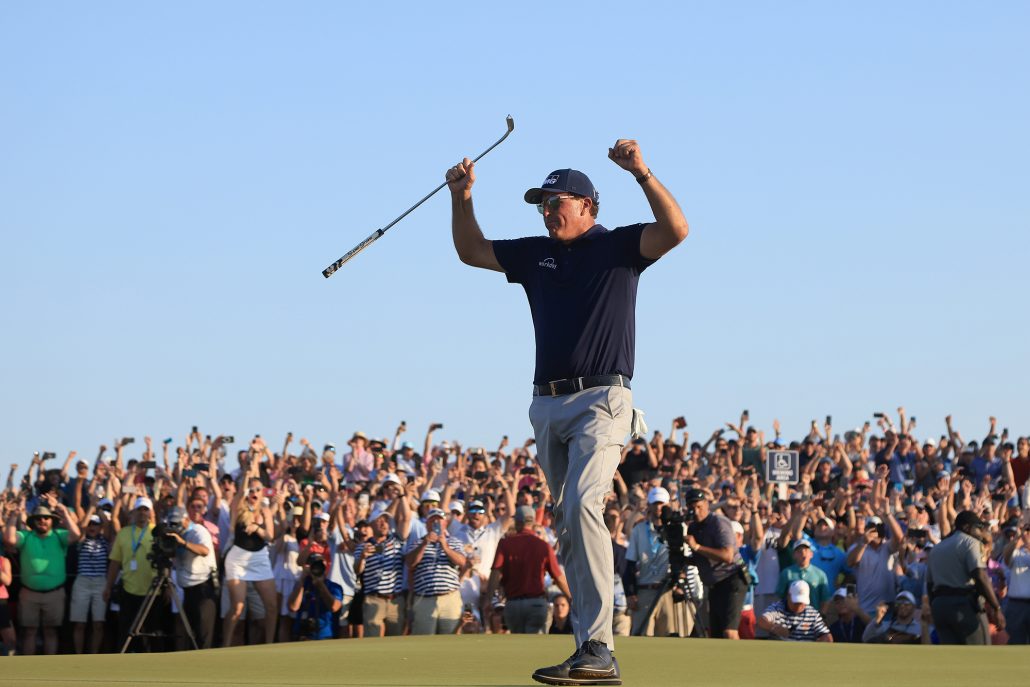