The price of a beer at Southern Hills needs to be seen to be believed, so of course social media had a field day with it

The PGA Championship drinks menu has gone viral and caused outrage on social media after it was revealed how much a beer will cost at Southern Hills.

The astonishing prices were exposed by Cody McBride, who posted a photo of the concessions menu on Twitter showing that even the cheapest domestic beer will set spectators back a staggering $18. Even a bottle of water is then priced at a hefty $6.

Ahhhhh okay @PGAChampionship. Gonna be a lot of upset folk in Tulsa next week! pic.twitter.com/A0gkolSWH4

And you thought London prices were bad…

By way of comparison, the price of beer at Augusta during the Masters was priced at a much more reasonable $5, with bottled water set at just $2.

Here are our favourite responses…

I've seen a lot of comments about this being ridiculous pricing, but a 6-pack of Stella for $114 seems very reasonable. https://t.co/hn749aC6sP

At least I’ll be sober and remember my first major 🥴 https://t.co/UoP8wLiZOU

I can’t believe the PGA championship are paying spectators $19 to drink Stella. It’s nowhere near enough.

I see the PGA Tour has come up with a financial strategy for generating enough profit to compete with the LIV. https://t.co/TkIhrVfanq

Nothing like drinking $1,964 worth of @MichelobULTRA’s to try and get a buzz…. https://t.co/GqCgvozi3V

$18 for (almost) any beer is absurd but $18 for a Michelob Ultra should be a prison sentence. https://t.co/cusiIWpcRS

$18 for a Michelob Ultra?!? The person responsible for setting these prices should be arrested. We’re not joking. https://t.co/Mz50PAdFTv

I have this many dollars✋ https://t.co/nVkqkMRVy2

Since the menu went viral, several of the world’s best players – including Justin Thomas – have also weighed in… 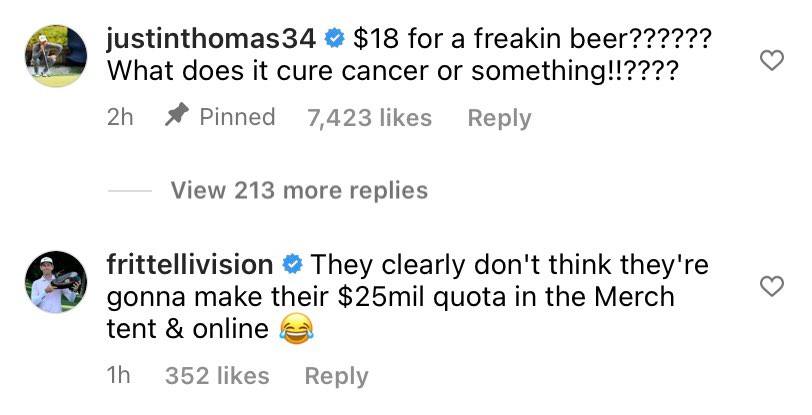 That’s one way of putting it.