PGA Championship: A history of the Wanamaker Trophy

Join us as we take a look at the history of one of golf’s most famous pieces of silverware.

Awarded to PGA Championship winner each year, the Wanamaker Trophy has been on quite the journey since its inception over a century ago.

The Wanamaker Trophy dates back to 1916 and coincides with the birth of the Professional Golfers’ Association of America.

Businessman Rodman Wanamaker wanted to coordinate a national organisation bringing together the best golfers in America to elevate the standards of the professional game. After discussing his plans with prominent players like Walter Hagen and Francis Ouimet, the PGA of America was founded with its own professional tournament to be held every year.

To kickstart the event, which was a match play tournament until it was switched to stroke play in 1958, Wanamaker put up a prize fund of $2,500 and ordered a unique silver trophy to be produced for the winning player. Standing at a burly 28 inches high, 11 inches wide and weighing 27 pounds, the Wanamaker Trophy was introduced and would crown the PGA Champion of America.

Jim Barnes was the first player to lift the Wanamaker in 1916, with the Englishman’s name etched into the trophy’s metal in consecutive years after he won the first two PGA Championships.

In the 1920s the Wanamaker Trophy became synonymous with Walter Hagen. ‘The Father of American Golf’ lifted the trophy five times over the decade which included four straight wins between 1924 and 1927.

Hagen’s streak was eventually ended in 1928 by Leo Diegel, who defeated the five-time champion in the quarter-finals to upset the favourite and claim the title.

But there was one slight problem. The Wanamaker Trophy had gone missing.

With the prospect of having to return the trophy apparently slipping his mind after a four-year reign, Hagen was forced to admit he had in fact lost the prestigious prize.

The story behind its disappearance remains a mystery. Hagen claimed the trophy had gone missing in the aftermath of his 1925 victory, when the 11-time major champion went out partying in Chicago and mistakenly left it in a taxi. All 28 inches and 27 pounds of it apparently not spotted by the departing taxi driver…

With Diegel still waiting, the PGA of America was forced to commission a duplicate trophy, the same one that is still used to this very day. Astonishingly, the original was discovered three years later in the cellar of Hagen’s club makers firm. Hagen’s lost property can today be seen on display at the PGA Historical Centre in Florida. 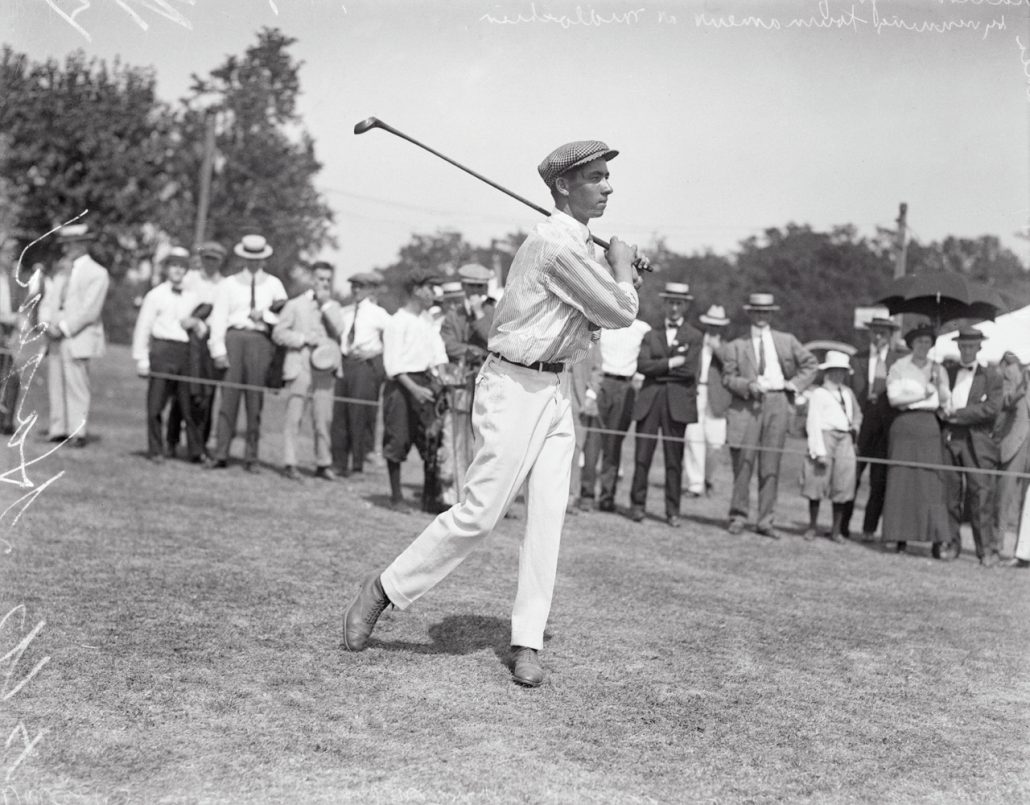 Into the modern era

The new Wanamaker Trophy continues to be one of golf’s most prestigious and desired commodities. Fortunately, no player has repeated Hagen’s taxi shenanigans by misplacing the trophy. Although each champion is now given a much smaller version of the Wanamaker by the PGA of America, just in case the prospect of taking the trophy out on the razz becomes a little too tempting…

The new Wanamaker still holds plenty of memorable stories in recent years, from Jason Dufner sleeping with the trophy in 2013, to Collin Morikawa fumbling its lid in 2021, to Phil Mickelson gulping red wine from the cup in 2021.

Brought the Wanamaker to Amy’s birthday celebration. The wine had an extra ingredient this time – just a dash of VICTORY 😋 Tastes so good! 😊 pic.twitter.com/UQZf4jXoYw

Each champion also continues to have their name engraved on the Wanamaker Trophy, a process which takes an average of 12 intricate minutes prior to the closing ceremony. Jack Nicklaus’s name remains etched into the famous steel just as many times as Hagen’s with a joint record of five. Tiger Woods is next with four.

Woods and Brooks Koepka are the only players to successfully defend the Wanamaker Trophy in the stroke play era.

Who will lift the Wanamaker at Southern Hills? Follow the action on our dedicated PGA Championship website.