From waiting tables to Open champion: The remarkable career that might never have been

Karen Stupples was scrimping and saving when she got what she calls the 'lucky break' that would eventually lead to her becoming a major winner. Matt Cooper sat down to hear her incredible story

Agatha Christie would have liked the conclusion to the 2004 Women’s British Open. Who killed the hopes of the field? It was Karen Stupples, with an eagle-albatross start to the final round, on the Old Course at Sunningdale.

The reference to the great dame of crime fiction is no mere coincidence. She lived in Sunningdale and, while it’s not much of a whodunnit (the reveal’s been blown), the victory is one which her famous creations, Hercule Poirot and Miss Marple, would have loved to unpick, detailing with their forensic minds the key moments that led to the warm August day that witnessed the Englishwoman’s career hotspot.

The story began, as Christie would have enjoyed, six years earlier. Indeed, she would have adored the setting, the characters and the motivations. Stupples was a young amateur, fresh from a spell at college in the US, and waiting on tables at the golf club and in The Sportsman pub in Deal when two regulars stepped forward.

“Keith Rawlings and his wife Sue,” Stupples told NCG ahead of this week’s AIG Women’s Open. “They asked me one day, ‘Why haven’t you turned pro? We see your name in the paper all the time.’ I said I’d love to and that I was saving up. As I cleared the table, Keith said, ‘We’ve had a few lucky breaks and we think you deserve one.’”

She stayed up until 2am that night completing the budget he’d asked for. He took one look and told her: “That’s fine – but I want to do this for three years, not just one.”

By year’s end she had an LPGA card, but the first season was still tough. “I had conditional status and limited starts. I tried to Monday qualify but I was down to my last $500 in my bank.” Whereupon she landed a pro-am spot ($1,000 fee) and a new sponsor stepped in. She made a first cut in her next start and in September thrashed a first round 64 to lead the Corning Classic.

What happened next matters. Remember it. If this was Christie, it’s a clue. A big one.

The event was 54 holes and in the second round she went out last on television: “I was so nervous I topped my first two tee shots, but I finished with a top 10 and felt like I was the richest person in the world.”

In the next three years she assembled a team: a new coach, a psychologist and a trainer. Four years on from that first exposure to the shock of a lead, she grabbed another (more clues: another 64 on day one). How had she changed?

“The first 64 was a random, streaky good round. By 2003 it felt normal, what I should be doing, what I had been working for, where I belonged.”

She kicked off 2004 with rounds of 68-67 to lead the Australian Masters at halfway. Third time lucky? Not quite. Time to test the little grey cells instead.

“I think everybody has an ‘aha’ moment before they breakthrough and that was mine. I played with Annika Sorenstam. She made a fast start, I pushed, I chased, I tried to make something happen and…”

“I played bad. She cooled off but it was too little, too late. I thought, ‘Why did I try to keep up? Why didn’t I trust my game?’”

In her next start she led the Welch/Fry’s Championship after 36 and 54 holes. An opportunity to put the new thoughts to the test. “I remembered the pain and I was like, ‘This time I’m playing my game.’”

The result? A five-shot victory, growing confidence, belief in where her team were taking her. One of them, her coach, had already said that he believed Sunningdale, that year’s Open venue, would suit her. She remembered it as she rocked up in late July, but the lesson learned at the start of the year had proved to be a bit of a red herring.

She led the Evian Masters, the final event before Sunningdale, at halfway before being passed at the weekend. Did she remember what happened the last time she blew a lead? “No! I would have been chilled if I remembered that. Instead, I was bitterly disappointed.”

To Sunningdale then, where rounds of 65-70 opened up a three-shot halfway lead. A second 70 saw her slip into a share of third but her focus was sharp and aggressive. “I asked my caddie Bobby about the Sunday pins. He said, ‘There’s a low one out there.’ So, I’m thinking fast start and that I need an early eagle.”

Christie would like this: the protagonist’s mindset. Suddenly it becomes clear that what happened next, almost certainly the greatest start to the final round of a major championship ever, was the consequence of that rarest of things: a golfer in the sweetspot of a sweetspot.

“Exactly that. I couldn’t wait to get to the next shot. I was so excited. My strategy, to avoid the fairway bunkers, was good but it was because I was so confident in my longer irons. Five, six iron, didn’t matter. I was hitting it that pure I felt great from any range.”

Many golfers have said such things. Few have delivered as Stupples was about to. She drained an 18-foot eagle putt at the first and didn’t even bother with putter at the second, dropping her approach for an albatross-two. She was a preposterous 5-under-par through two holes.

What did the field think? “I sometimes wonder if they thought something was wrong with the scoreboards.”

And what did she think? “Honestly, I felt like I was going to make everything. Bobby said, ‘Let’s go shoot 59’ – and I absolutely thought I could. I don’t think I even really paid attention to what anybody else was doing. I didn’t even care.”

There was a little late wobble, but she completed a five-shot victory. And her final round total? Another 64. 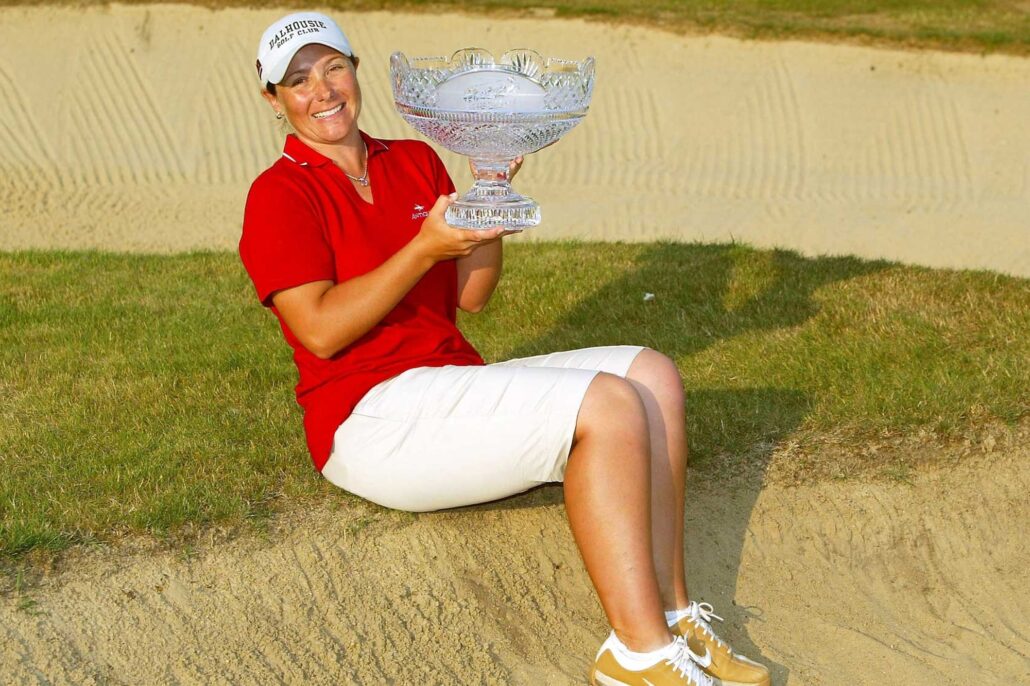 “That was as good as it gets. Once I got past the first tee shot, I wasn’t thinking score. I was addicted to hitting the next shot. The excitement of that overwhelmed everything else, even the desire to win. I had my best strike on speed-dial and it was awesome.”

“It was my career purple patch. I had it for a month and I suspect it’s what Annika or Karrie Webb felt like all the time!”

And then came the aftermath. “It was very overwhelming. The phone was constantly ringing, I didn’t have a management company and, for as much as I’m very chatty, I’m also quite introverted. Fortunately, there was more golf because the golf course has always been my sanctuary. No matter how overwhelmed I feel with life, the golf course was always there for me.”

Now a respected TV commentator, Stupples looks back and is thankful for the chance she was granted to reach the top of the game.

“How many golfers had talent, but never had the financial break to properly give it a go, who never reached their potential because of all that added pressure? Without Keith and Sue Rawlings I’m not sure what I would be doing. Would I ever have saved enough money to have given it a go? They changed the course of my life.”

A nod of the head from Miss Marple. She liked the glorious two-hole start to the Open. She liked the stunning contrast with the two topped tee shots five years before. She likes the Rawlings. And Karen Stupples? She reminds Miss Marple of someone she once knew from St Mary Mead.