What was that about lightning not striking twice?

Another week, another mind-blowing hole-in-one story from the world of amateur golf – this time courtesy of not one, but two teenage sensations on their quest to reaching the top of the sport.

The scene which would look farfetched in a video game comes from Stocksfield Golf Club, where budding juniors Cameron Thoburn and Oli Edwards were competing in an U18 northern match between Northumberland and Cumbria.

After a dominant front nine, Oli of Cumbria saw himself hold a healthy 3-hole lead as the young duo reached the turn. Then, things got utterly ridiculous on the par-3 10th.

Vying to extend his lead, and brimming with confidence, Oli pulled out his trusty 6-iron and produced another dagger to Cameron by holing out for a memorable ace to put the match all but out of sight – his first hole-in-one!

Well, you can guess what happened next.

Tackling a feat which stands at a near impossible 17-million-to-one, Cameron picked himself up, pulled out his 7-iron, and only went and saw lightning strike twice when he too holed-out for an inconceivable ace. Hole halved! 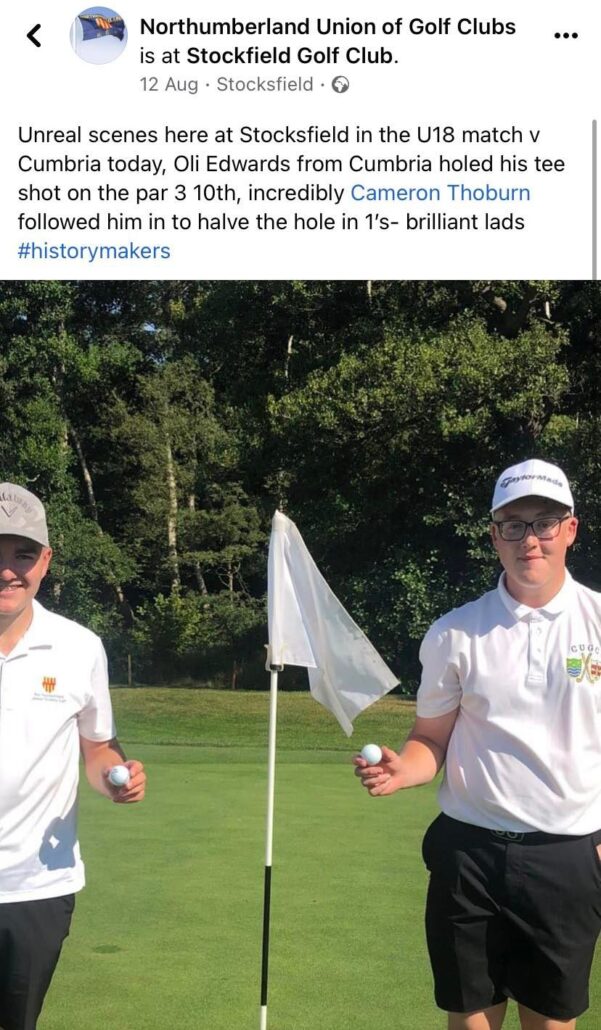 “After struggling with my golf game, Oli showed me the line.” Cameron said. “Then, boom, straight in for a half! I was over the moon!”

Insane. Unfortunately for Cameron, the hole-in-one heroics failed to spur on a comeback, as he fell to a 4&3 defeat. But his side did manage to pick up the win overall, and the pair were left with a bar tab to share, and a memory to cherish forever.

And if you thought that story incredible, wait until you get a load of these…