Graeme McDowell has had a rollercoaster Ryder Cup career – and there is plenty more to come. Alex Perry sat down with the three-time winner

It’s one of the most famous putts in Ryder Cup history. A 15-footer that snaked one way then the other before dropping in the side door. Graeme McDowell flung his hands in the air and the packed gallery surrounding the 16th green at Celtic Manor’s TwentyTen course erupted.

It was tensest battle between Europe and the USA since Brookline in 1999, and the first time the final singles match would determine the outcome of the biennial slobberknocker.

Ten minutes later, McDowell’s opponent Hunter Mahan duffed a chip at the 17th. He turned to shake his opponent’s hand before the ball had come to a rest.

Just three months after opening his major account at the US Open, McDowell had played a pivotal role in regaining the Ryder Cup for Europe.

“I felt bulletproof,” McDowell tells NCG with that huge smile beaming across his face. “That was the emotional pinnacle of my career.” 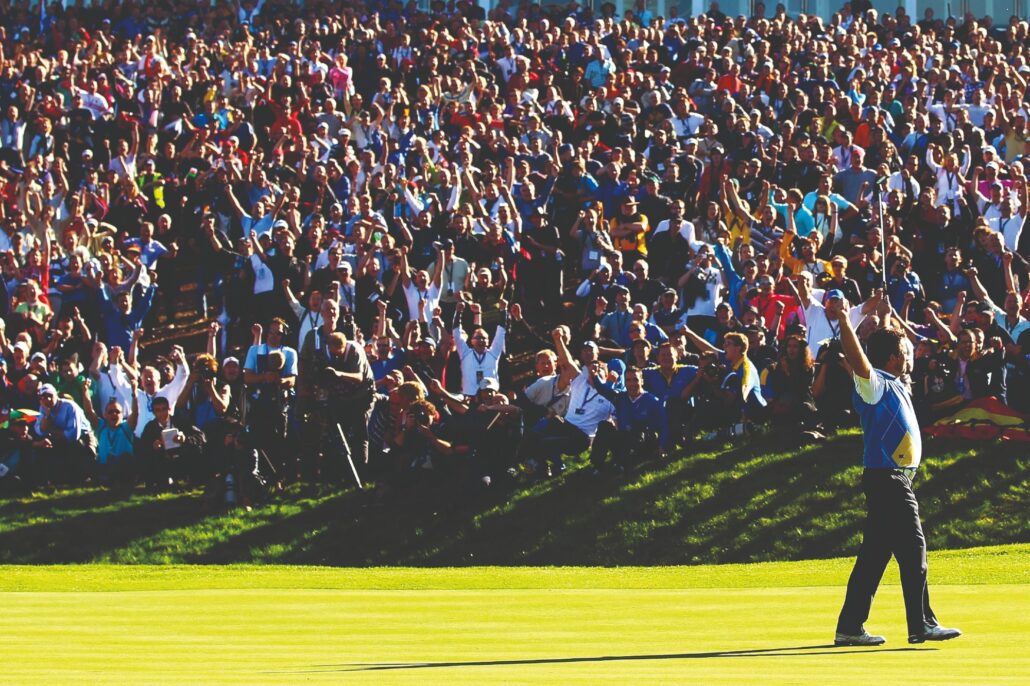 While it’s easy for a lot of us to block the disastrous Ryder Cup that had happened two years prior out of our memories, it provided that stepping stone for McDowell to achieve what he did in 2010, first at Pebble Beach and then in Wales.

McDowell was one of very few positives to come out of Nick Faldo’s calamitous captaincy at Valhalla. The Northern Irishman ended his debut with two-and-a-half points from a possible four. Only Ian Poulter and Justin Rose came home with more.

“I look back at 2008 and, yes, there were a lot of negatives. We lost, and there were potential dramas inside the team itself.

“But for me, and my unspoiled eyes, it was special in many ways. I was surrounded by some of my heroes.

“I loved it. It was everything I hoped it would be in that it gave me the belief I was good enough on the big stage. It helped me get to the highest level.” 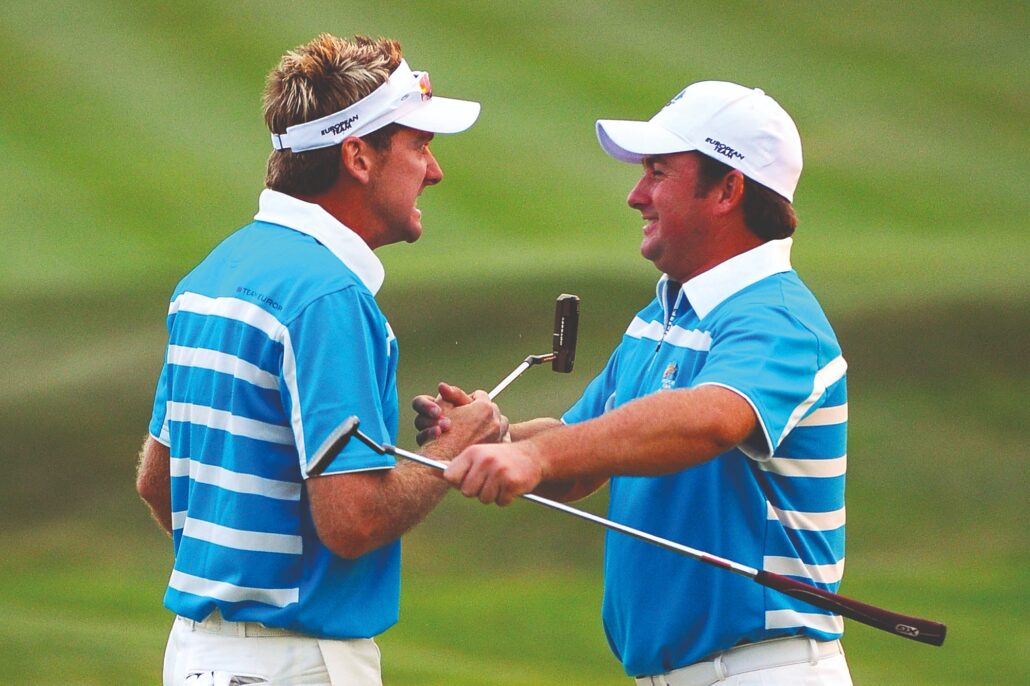 He continues: “It was only two years but my journey as a player had taken off into the stratosphere in regard to the type of player I was. From 2008 I won a couple of tournaments, got myself on the team and, in 2010, I was one of the best players from a world ranking point of view – and that was very different.

“Colin Montgomerie made me feel like one of the leaders in the team. We had such good camaraderie, great chemistry, and the best players.

“The vibe in the team room was phenomenal.”

McDowell pauses as he reflects.

“I was very fortunate to win a major championship and then play in the last match at a Ryder Cup and compare the way the two felt.

“But there’s nothing quite like the way a Ryder Cup feels, it’s as simple as that. It’s the back nine at a major multiplied by 20 and it’s a very special feeling.”

Another of McDowell’s Ryder Cup legacies will be his work with the rookies. None more so than Victor Dubuisson in 2014.

“We always tried to create a mood in the team room where the rookies can perform at their best,” he explains. “The Molinaris at Celtic Manor, Nicolas Colsaerts at Medinah, and Victor at Gleneagles spring to mind.”

Dubuisson was a superstar in the making and, thanks to top-10 finishes in the WGC-Match Play, The Open, and PGA Championship, qualified in third position for the Ryder Cup. Only World Nos 1 and 5 Rory McIlroy and Henrik Stenson were ahead of him. 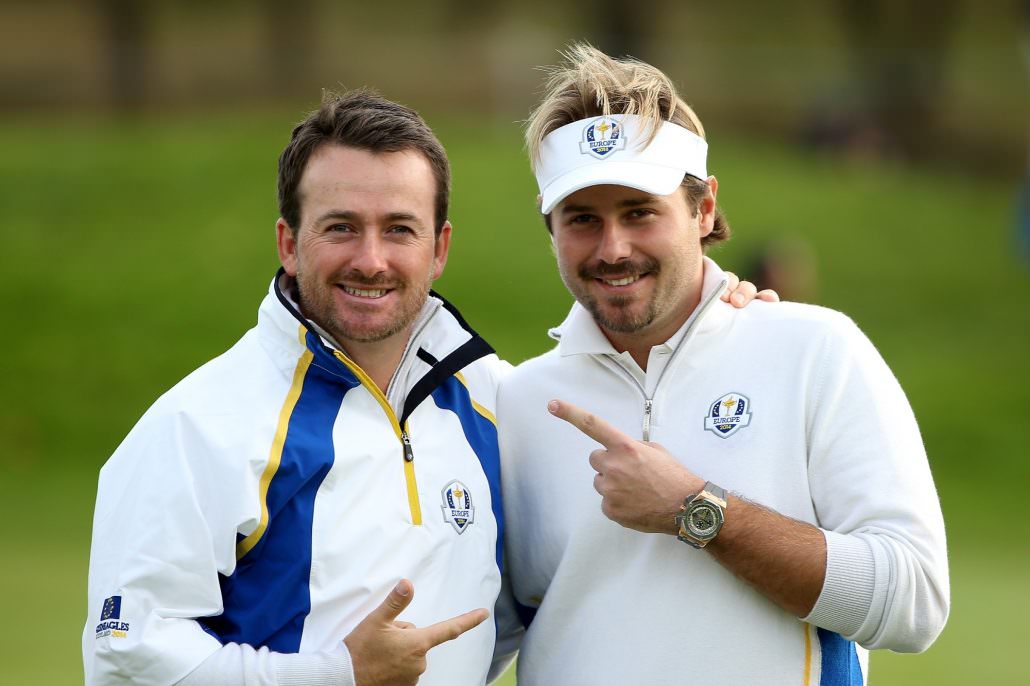 Captain Paul McGinley paired McDowell and Dubuisson for the afternoon foursomes on both Friday and Saturday. They first saw off the team of Phil Mickelson and Keegan Bradley that had been so effective at Medinah two years previous, before blowing away Rickie Fowler and Jimmy Walker in a match so comfortable it didn’t reach the 15th hole.

As they celebrated and the pair had multiple cameras thrusted in their faces, McDowell flung his arm around his French partner – a shy and retiring character who had endured a troubled childhood – and declared: “I love this kid!”

Only Zach Johnson, in a by-then meaningless halved anchor match in the singles, prevented Dubuisson from going three-for-three.

“I knew he was good,” McDowell said at the time. “I didn’t know he was this good. Whatever small part I’ve played in getting him ready this weekend, I’m proud of that.”

It’s difficult to imagine that neither McDowell nor Dubuisson would be involved in another Ryder Cup in a playing capacity. The Frenchman wasn’t far off making Darren Clarke’s team for Hazeltine in 2016, but he disappeared off the face of the earth after his left eardrum “exploded” – his own description – and he was forced to have surgery.

Ahead of that joyous week in Scotland, Dubuisson had made it into the top 20 of the world rankings for the first time. By the time the teams teed off at Le Golf National four years later – a Ryder Cup in his home country – he wasn’t even playing and struggling to stay inside the top 500.

“Victor is a really sweet kid,” McDowell says with almost a hint of sadness in his voice. “He’s an enigma and his personal life is complicated. I know he feels victimised by the French press and he has a lot of demons.

“It’s unfortunate because he’s such a talented player.”

McDowell, instead, prefers to remember the happy times.

“It was great to have the opportunity to put my arm around somebody who was playing in a Ryder Cup for the first time.

“There is so much intensity at a Ryder Cup that taking care of yourself is hard enough. To be able to take care of somebody else helped me a lot in terms of taking the pressure off me.

“Helping Victor enjoy his experience and get the most out of his game that week was great – and he played phenomenal golf. I said in the interview ‘I love this kid’ because I was able to knock a few putts in and it was a super fun experience.

“I enjoyed the opportunity to have a little bit of influence on him and his golf. It was a very memorable Ryder Cup for different reasons – and one I certainly look back on pretty fondly from a personal perspective.” 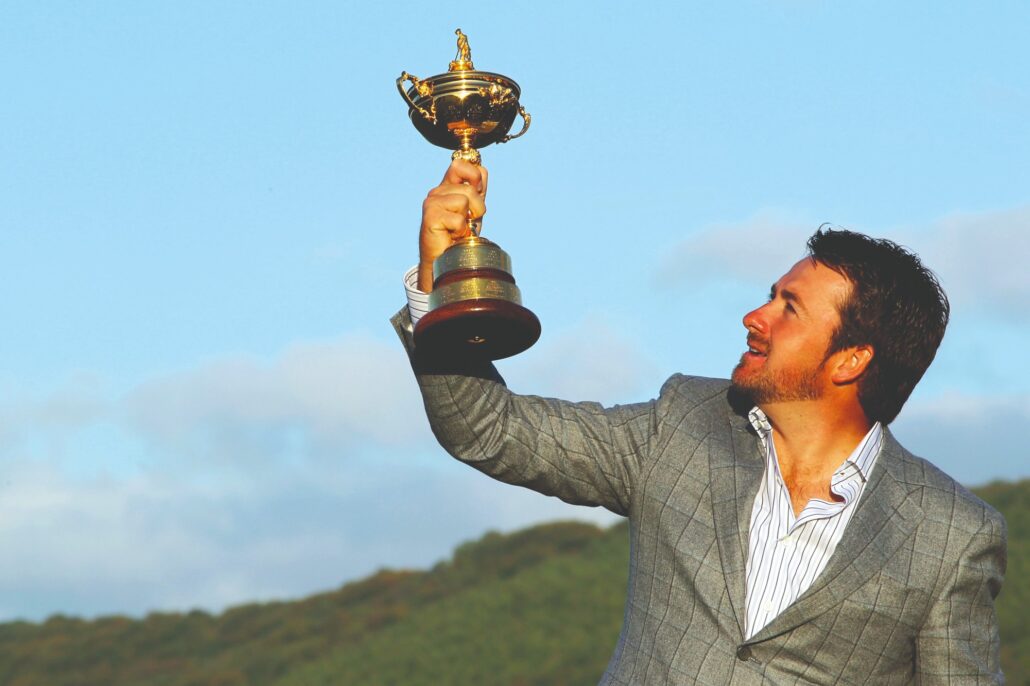 Looking ahead to this year, McDowell will serve as a vice-captain to Padraig Harrington, having already had an assistant role in Paris in 2018. More often than not, it leads to the top job.

“I’d love to,” McDowell says before I can finish getting the question out of my mouth. But there’s caution.

“Being a Ryder Cup captain is a really interesting one,” he explains. “I look at Padraig, for example, and if he goes and loses the Ryder Cup at Whistling Straits – and this is hypothetical, I hope we win, I hope we kill them – but if he was to lose the Ryder Cup, does that have an effect on who he is and what his legacy is in this game?

“It’s strange because, I feel like it has affected the legacy of some captains, both European and American. And I’m not sure that is fair.

“Take Tom Watson at Gleneagles. He’s a champion, he’s one of the best to have ever played the sport, but the way he handled the team room came under a huge amount of negativity.”

McDowell is, of course, referring to that now infamous press conference following the USA’s defeat in 2014 where Phil Mickelson not only threw his captain under the bus but made sure it reversed over him several times. 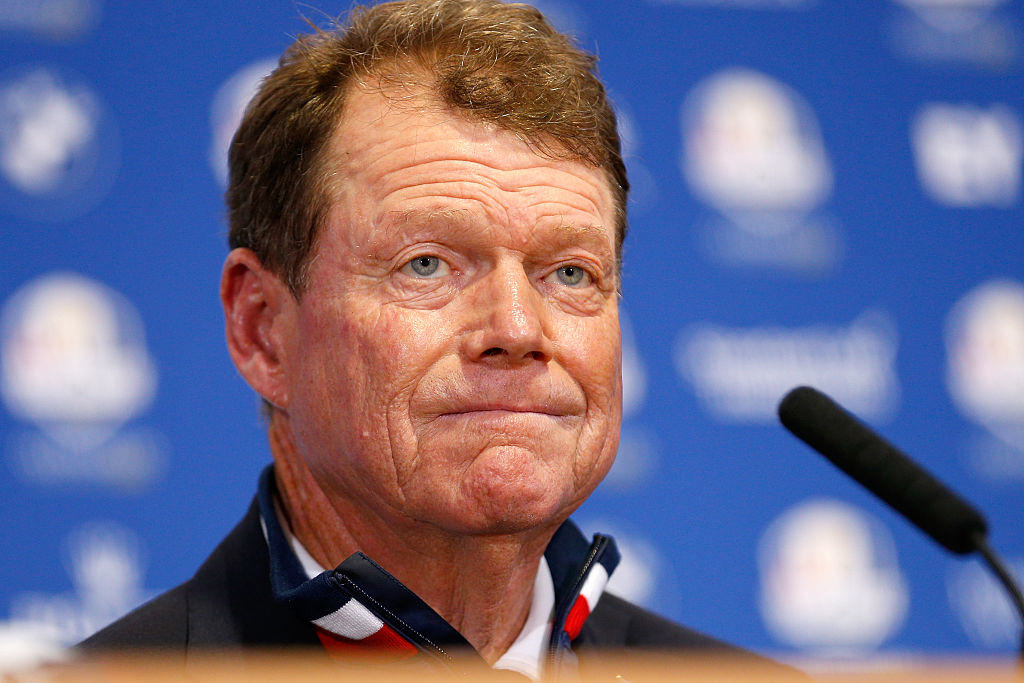 “We were getting our party on around the time of that press conference,” McDowell jokes. “So it wasn’t until the next morning when we heard about it.

“It’s impossible to comment on what went on within the team room to prompt that type of response, but the captain creates a culture and an environment, picks the pairings, and gees the boys up. But at the end of the day it comes down to the 12 players not producing the goods on the golf course.

“I just hate the situations like what happened to Watson, because he’s a great player and a gentleman. But who knows what went on? It’s tough to say.”

“Going back to do I want to be a Ryder Cup captain, yes, I would. It will just always have this three per cent element of doubt.

“For guys like Padraig, whatever happens his playing career was phenomenal and it shouldn’t have any bearing and he’ll be a great captain, win or lose.

“But if I was to lose, what does that mean for me and how I’m remembered in the sport?

“Whatever happens, it’s been a rollercoaster,” he concludes. “I’ve been rookie, I’ve played in the last match, I’ve hit the first tee shot, I’ve done the veteran-putting-an-arm-around-the-rookie. I’ve had some amazing experiences.”

And there’s plenty more to come. 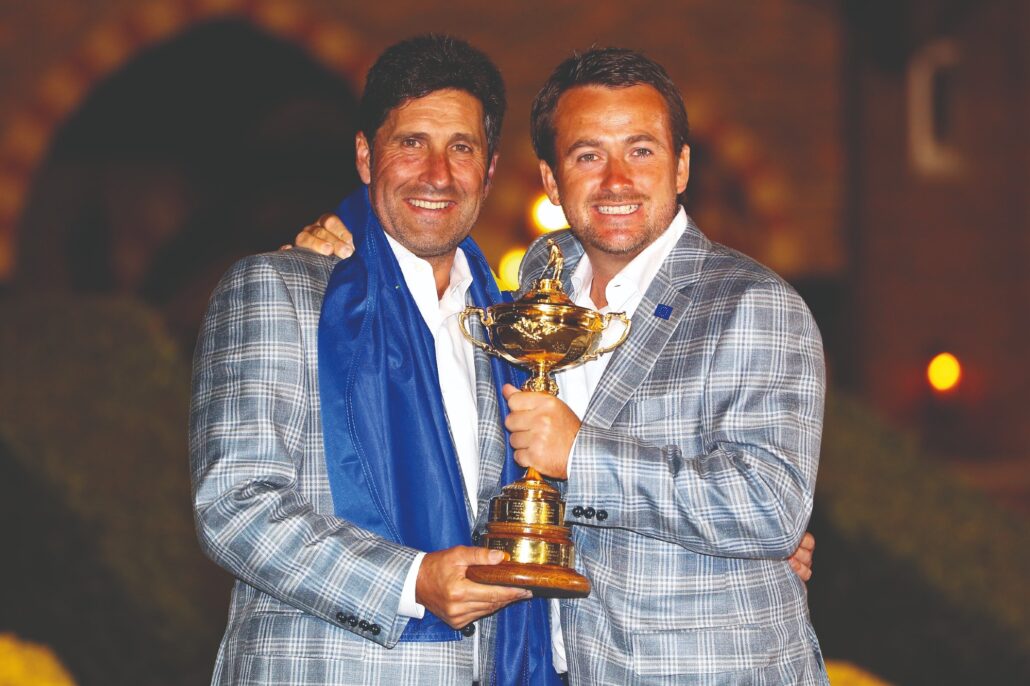 Now listen to the full podcast with Graeme McDowell…

McDowell was chatting to me about the Ryder Cup and much more on the NCG Podcast. Listen to the full interview in the player below or wherever you get your podcasts.