The year Koepka found his voice

It's been quite a year already for Brooks Koepka as he's continued to dominate the game. Now he's also becoming the go-to voice for some interesting opinion

It’s part of human nature to accentuate the negatives and Brooks Koepka was no exception. He might have won back-to-back US Opens and moved very quickly on to three majors in total but he wasn’t getting the recognition from inside the game – a lack of obvious delight at winning a major seemed to be enough to put most off – and  those outside it.

In ESPN.com’s Dominant 20 ranking at the end of 2018, a year when he’d won two of the three majors he’d played in, he was nowhere to be seen on their list.

Inside the game he said at Shinnecock that “I’m always overlooked.”

At the PGA Championship he wasn’t interviewed after an opening 69 before, after winning at Bellerive, “I don’t care what anyone thinks about me.”

In the same tournament he revealed that he was lifting weights with Dustin Johnson and, while the fans couldn’t get enough of Johnson, they barely recognised his sidekick.

At the Tour Championship he wasn’t even part of the pre-tournament press conferences.

Which comes to this year and a very different Koepka though the results have stayed on trend. If he’s not winning a major, then he’s very nearly winning a major. His results this year have been a head-munching T2-W-2-T4.

In front of the microphone Koepka has let us, if not into his life, certainly into some of his opinions. “This is who I am, and I’m not going to change for anybody, I’m just going to show you guys who I really am.”

We’re at the Honda Classic at the end of February and Koepka is warming to his task.

“You’re actually, probably, getting the real me now. I think, before, I was just trying to be politically correct, not stir any bubbles and just kind of go on with things and be unnoticed. I feel like I actually do have a voice, and it will be heard. I can do that now, where when you’ve won once on the PGA Tour, you can’t really say the thing you want to say.

“There are a lot of things I’ve got opinions on. I’m going to say it now. I’m not going to hold anything back.”

And he wasn’t all talk. First up, Bryson DeChambeau and his dawdling in Dubai and then JB Holmes’ laboured win in the States…

“I just don’t understand how it takes a minute and 20 seconds, a minute and 15 to hit a golf ballI. It’s not that hard. Guys are already so slow it’s kind of embarrassing. I just don’t get why you enforce some things and don’t enforce others.

“Slow players are breaking the rules but no-one has the balls to penalise them.”

Next up, Sergio and his DQ in Saudi Arabia.

“To act like a child out there is not cool. It’s not setting a good example and it’s not cool to us, showing us no respect or anybody else. That’s just Sergio acting like a child.”

A few weeks later and some ordinary results were enough for Brandel Chamblee to get stuck into Koepka. He had lost 10 kilograms since the end of 2018, supposedly for an appearance in ESPN’s The Body Issue, and Chamblee gave him both barrels.

“For him to change his body, and his body chemistry, for vanity reasons, for a vanity shoot, is the most reckless self-sabotage that I have ever seen of an athlete in his prime.”

“I lift all the time. I lift too many weights and I’m too big to play golf. And then when I lose weight, I’m too small. So, I don’t know. I don’t know what to say.

“Listen, I’m going to make me happy. I don’t care what anybody else says. I’m doing it for me and obviously it seems to work.”

Three days later he came within a putt of a play-off with Tiger.

A few weeks later Chamblee couldn’t help himself when he said that only Johnson and McIlroy could challenge Woods as the best in the business. He then listed Spieth and Jon Rahm as other possibles but not the man with three very recent majors to his name.

Koepka, not known for his social media skills or his obvious humour, proved us all wrong…

Undeterred he unleashed a bomb on the eve of his PGA defence at Bethpage.

“I think sometimes the majors are the easiest ones to win. There’s 156 in the field, so you figure at least 80 of them I’m just going to beat. You figure about half of them won’t play well from there, so you’re down to about maybe 35. And then from 35, some of them just – pressure is going to get to them. It only leaves you with a few more, and you’ve just got to beat those guys.”

If you’re one of his peers you might be equally fuming as you are terrified, particularly when he opens up the week 63-65. Then there was the mini wobble as his gym buddy DJ came at him and you wondered if karma was going to step in and ruin everything.

But, come the close of play and his fourth major win in eight starts, he was back on the Chamblee bandwagon.

Relatively speaking Koepka was low key at Pebble Beach. In the build-up Koepka was on the wrong end of another snub after a very brief appearance and no mention of his name in Fox’s TV advert to promote the US Open.

Be cool Brooks, be cool. You’re better than all that, you’re the one with the silverware.

“A bunch of people on Twitter tagged me in it and I guess were amazed that I wasn’t in it. I was just kind of shocked. They’ve had over a year to kind of put it out. Somebody probably got fired over it – or should.”

Put the mic down Brooksy…

“I wasn’t on the list of notables [on day one of the 2018 US Open] after winning it the year before. There are a couple of things where it’s just mind boggling. It’s like, really? Like, how do you forget that?”

Come Portrush he was definitely, definitely not bothered about anything like that.

“I’m over that. I’m over trying to get the recognition. You either like me or you don’t, that’s life in general. That’s not anything I’m too concerned about at this moment.”

And back into the ‘I don’t really do golf’ schtick that most people seem to take most offence at.

“I just practise before the majors. Regular tournaments I don’t practise. If you’ve seen me on TV, that’s when I play golf. I left the Travelers and showed up at 3M on Tuesday night. On Wednesday was the first time I touched a club in, what, 10 days. That happens week in and week out. And majors I like to play the week before and find a rhythm, build a rhythm. Got over here Friday and have practiced. So I’m usually ready for majors.”

Again, if you’re a peer who spends 90 per cent of your waking hours banging balls on the range there will likely be a more-than-simmering contempt for someone who hits it further and better than you without even practising.

On the Saturday night Koepka claimed that “nobody has hit it better than me this week” despite only playing with three other players to that point. It was his putting that was getting in the way.

His final playing partner for the 2019 majors would be JB Holmes and therefore an absolute open goal for the now outspoken Koepka.

“I wasn’t wearing a watch, so, yeah. Yeah, I mean, he had a rough day. But JB is a slow player. I know it’s difficult with the wind but I didn’t think he was that bad today. I thought he was alright.

“There were some times where I thought it was slow. There’s a lot of slow guys out here. I’m usually ready to go, as soon as the guy’s ball is coming down.

“That’s what I don’t understand when it’s your turn to hit, your glove is not on, then you start thinking about it, that’s where the problem lies. It’s not that he takes that long. He doesn’t do anything until his turn. That’s the frustrating part. But he’s not the only one that does it out here. The European Tour does an unbelievable job with the pace of play, posting it in the locker rooms. The PGA doesn’t do that.”

This is the way into the people’s hearts, tell them you play quick. You can pretty much do whatever you like but if you’re on a moral crusade into speeding the game up, which Koepka seems to be, then you’ve cracked it.

Like his golf he’s come a long way in a short space of time. 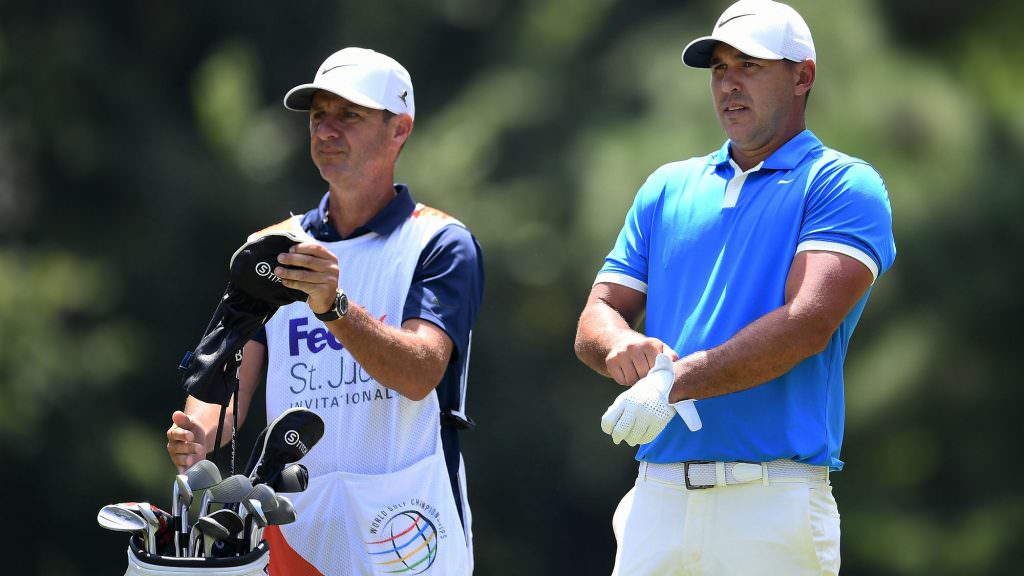 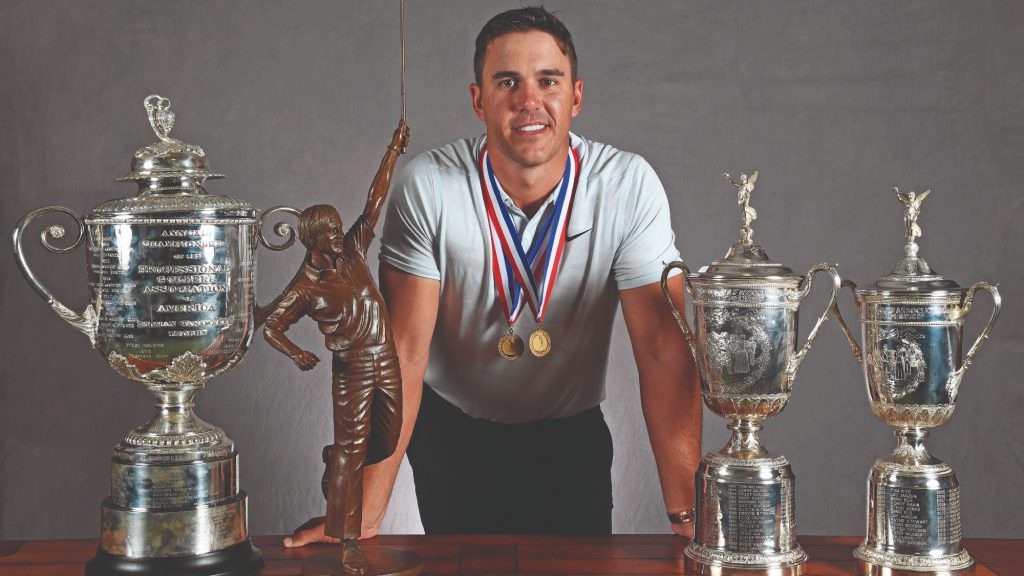 How many majors will Koepka win? 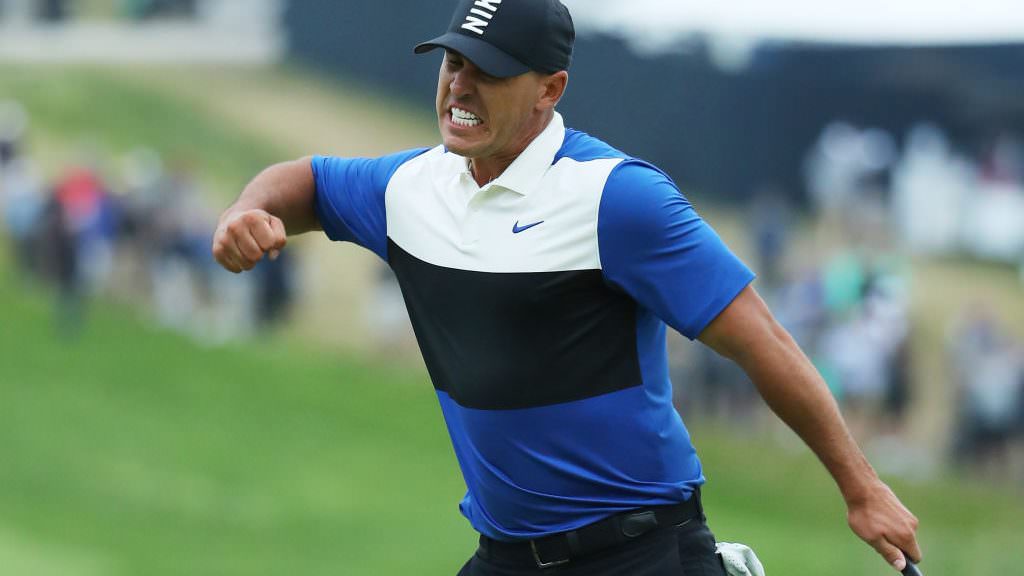 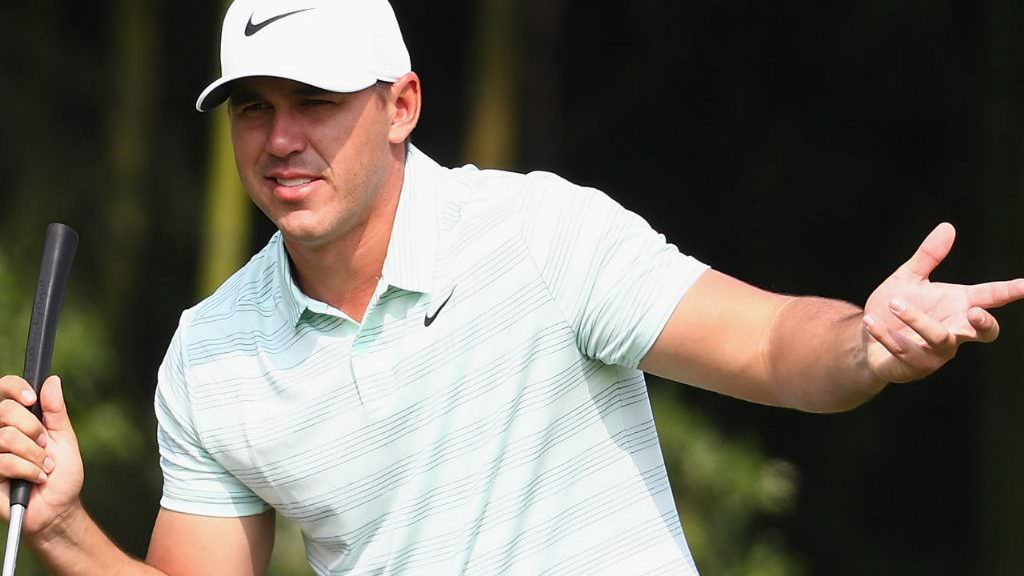 The time a horse was shown more respect than Brooks Koepka

Wilson take their golf ball to the next level with Triad

How Sounder are changing the way we think about golf