Today at the Solheim Cup: Dominant USA romp to victory

The USA once again have their hands on the Solheim Cup.

The Americans, led by captain Juli Inkster, secured back-to-back Solheim victories after yet another clinical display in the Sunday singles at Des Moines, Iowa.

Europe put up a stubborn resistance, winning six points in the singles, but the five-point deficit heading into the final round proved too big an obstacle to overcome as the USA won 16 1/2 – 11 1/2.

James Broadhurst rounds up the best moments from the final day…

Sunday’s task for Annika Sorenstam and her European charges was massive. The 5 1/2 – 10 1/2 scoreline in America’s favour was the biggest deficit faced by a European side since the 1998 Solheim Cup (also 5 1/2 – 10 1/2), which was the last time Team USA led heading into Sunday.

The USA needed just three-and-a-half points at the start of the day in order to retain the cup.

Europe required a record-breaking turnaround but it proved to be too big a mountain to climb.

In the early stages, Team Europe came out fighting with blue littering the scoreboard.

Sorenstam packed her big guns into the top half of the matches and, at one stage, it looked like the Europeans could potentially pull off a shock turnaround.

Europe were leading in five matches and all square in six in the early stages.

Nordqvist, in the crucial first match against Thompson, was four up after as many holes. But Thompson staged a breathtaking comeback in the back nine to produce one of the greatest duels in Solheim history.

The pair would finish all square after a stunning birdie from Nordqvist at the last.

And with Thompson’s turnaround, it seemed as if the tide had turned in the USA’s favour as red once again covered the leaderboard.

Cristie Kerr clinched a 2&1 victory over Mel Reid, with the American always in charge of the third match of the day.

Team USA then only required a single point from the remaining nine matches to retain the cup after Paula Creamer fought off the challenge of impressive rookie Georgia Hall to win one up.

But Europe weren’t going to bow out meekly as Catriona Matthew and Caroline Masson both added points to the blue side of the leaderboard, beating Stacy Lewis and Michelle Wie respectively.

Despite Europe’s resistance, it would prove just a matter of time before the USA would reclaim the cup.

Karine Icher and Angel Yin halved their match and with Lizette Salas one up against Jodi Ewart Shadoff heading to the 18th, the USA knew they had their hands back on the Solheim Cup.

Salas then holed the crucial putt on the 18th hole to win one up and ensure America were the 2017 winners.

Here is the moment that the USA clinched the cup outright…

The Solheim Cup is ours once again. Check out the putt by @LizetteSalas5 that clinched it. #SolheimCup2017 pic.twitter.com/ISWUNDyaX9

Feel-good moment of the day

Like a pair of embarrassing family members at a wedding, team captains Annika Sorenstam and Juli Inkster treated fans on the 1st tee to an Abba dance-off.

And it summed up the exemplary sportsmanship and relaxed atmosphere during the three days, a welcome sight in light of the ‘Gimmegate’ incident of 2015.

Watch that surreal dance-off moment below…

Spare a thought for…

It was hectic week for the 47-year-old, who is expected to captain Europe when the Solheim Cup visits Gleneagles in 2019.

Matthew was meant to be in Iowa as one of Sorenstam’s vice-captains but ended up playing as a last-minute replacement for the injured Suzann Pettersen.

But she wasn’t there to make up the numbers after contributing three points to Europe’s tally, which was only bettered by Nordqvist’s three-and-a-half points.

In the singles, Matthew was three down to former world No.1 Stacy Lewis after 11 holes but fought back to win on the last.

Best shots of the day

No-one could take their eyes off the clash between Nordqvist and Thompson, little wonder with shots like this jaw-dropping eagle from the latter at the par-5 11th…

Oh Lexi! Bam! Gets one back with this! #SolheimCup2017

Four down at the turn, Thompson topped off her remarkable fightback with this eagle on the 15th…

Oh @Lexi! – part deux! With this eagle putt on 15, Thompson brings her match back to AS w/ Nordqvist. #SolheimCup2017 Tune in @GolfChannel pic.twitter.com/7gXG8o371X

Nordqvist had the final say in an epic battle with Thompson that will go down in the history books.

Caroline Masson was in unstoppable form in her match against Michelle Wie.

Worst shot of the day

Cristie Kerr is one of the best putters in the women’s game and had made a habit of walking in her putts over the first two days at Des Moines. However, she was left a little red-faced on the 1st hole against Mel Reid. She attempted to walk in her short putt only to see it lip out.

Stat of the day

Photo of the day

Quote of the day

Lizette Salas, who holed the winning putt for the USA, said: “This is what I worked for all year. I’m still shaking. I’m just glad I got it done for Team USA. We were so confident in each other. Our captains had all the faith in the world in us. This is a memory I will cherish forever.”

More from the Solheim Cup 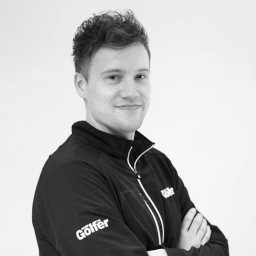