Ryder Cup player ratings: How the stars stacked up at Whistling Straits

The Ryder Cup may have ended in a record-breaking 19-9 victory for the hosts, but which players played their part and who needs to work on their game? Dan Murphy gets out his red pen

Curiously identified as a foursomes specialist by Captain Stricker, partnering Brooks Koepka twice, winning on the first morning but running into the brick wall that was Europe’s Spaniards on Saturday. Handed a singles win when Matt Fitzpatrick fatted his approach to the last.

Looked every inch the hottest player on Planet Golf right now – a major champion in waiting. His partnership with Xander Schauffele was as strong on grass as it looked in paper. Depressingly ruthless in demolishing Shane Lowry in the singles to cap his week off. Not the most endearing, if that matters.

A redemptive week for the game’s pantomime villain, who came across as a much more likeable figure than his nemesis Brooks Koepka. A couple of outrageous tee shots will live long in the memory: there was the 417-yard effort that left him 72 yards into the 600-yard 5th on Friday, and then his opening bomb in the singles into the heart of the first green to set up an eagle. Managed to go all week without saying anything preposterous, which was almost as remarkable an achievement as anything he did with club in hand.

Played the role of Tony Finau’s wing man in America’s nice-guy pairing. Looked comfortable in this environment, if unspectacular. You have to suspect he had more to give if his team needed it. Slightly surprising singles defeat to Lee Westwood – although the match was over by then.

Quietly very impressive in Paris, for those who were watching closely, and continued that here on the opening day. Putted like we have rarely seen him do before as he carried Harris English to a fourballs win. Slightly less inspired on day two and then well beaten by Ian Poulter in the singles as his week ended in a whimper.  Still high-calibre for a support act though.

Immense. Helped by some high-quality partners in the shape of Collin Morikawa and Xander Schauffele, it must be said, in the pairs. Just did enough to hold off Paul Casey in the singles to become the first American since Larry Nelson in 1979 to win five points at the Ryder Cup, and only the third overall.

Said beforehand that he found the team format alien and that’s what it looked like for the most part. He wasn’t exactly a passenger but nor was he one of the American studs. Not hugely endearing when swearing at rules officials either, which has cost him a grade here.

A joy to watch (unless from a European perspective). Quietly becoming a golfer for the ages and just as classy off the course as he is on it. The stronger half of his partnership with Dustin Johnson, truth told. His halved match with Viktor Hovland was a great spectacle – and turned out the right result in the end.  Both are fine ambassadors for the game in every way.

The Olympic champion lived up to his billing and was another thorn in the European side. Apart from his lavish golfing skills, is quite the competitor to boot. Surely the first of many appearances in this arena, which is terrible news for Europe. Slightly surprising to see him lose without much of a struggle in the singles, not that it made any difference.

The equable American was identified by his captain as the man to hold Bryson DeChambeau’s hand in the pairings and guide him through the week. That he did extremely well, with the pair picking up a win and a half in their fourball outings. Drew the short straw in the singles – AKA Jon Rahm – and promptly opened up with five birdies in the first six en route to dishing out a 4&3 beating to the World No 1. Hard to think of how his week could have gone any better – and this from arguably the weakest name on the American teamsheet.

A surprisingly peripheral role for a figure who has been front and centre in his previous three Ryder Cup appearances. Such was the strength of this American team that we barely noticed and it hardly mattered that he and Justin Thomas lost the week’s opening match. Won his first half point in Ryder Cup singles at the fourth attempt.

Not at his best and now has some serious competition to be America’s stud. Still a class act though, even if his beer-swilling antics on the 1st tee on Saturday afternoon were a little below him. Finished the week in style by letting Tyrrell Hatton know who was boss. Another massive long-term obstacle to Europe’s chances in the Ryder Cup.

You can’t do more than win the Ryder Cup. Actually you can – you can pulverise the opposition. That’s what Captain Stricker’s legacy will be. Uncomfortable in the early part of the week but it all went like clockwork on the course. There will be those that say he couldn’t fail with this team but let’s give the credit for ensuring they didn’t get in their own way. From the moment the first ball was struck, we never heard a mention of the alpha males in his team who don’t get along. The captain deserves much credit for that.

Padraig Harrington’s Europeans went down to a record beating in Wisconsin. But they were simply beaten by a vastly superior team

A brutal week for the Englishman, who drew Dustin Johnson (four times), Collin Morikawa (twice), and Xander Schauffele over the course of the week while being asked to partner three different Europeans (Viktor Hovland, Bernd Wiesberger, and Tyrrell Hatton). He came out of the week with precisely nothing in the points column which was not a fair reflection of his golf. Summed up by losing on the last green in the singles. If this proves to have been his last act in the Ryder Cup, then top-class sport can indeed be cruel.

Arrived out of form and while his foursomes partnership with Lee Westwood had some merit in theory, it was one-paced in practice. Sometimes steady trundling along is good enough to get the job done in this format but not this week and not against this American team. The fatted approach into the water on the final hole summed up his Ryder Cup experiences to date – played six, lost six. Ouch.

Should probably have played once more, though for all the difference it would have made it’s not really worth dwelling on. Some trademark iron play but also some errant long-game work– summed up by a 3-wood that pitched about halfway across Lake Michigan on the 17th in the fourballs. The singles half against Jordan Spieth was a good way to finish.

While Europe’s Dad’s Army endured a miserable week, the Spaniard was the glorious exception. Although it helps when you get to peg it up with Jon Rahm. Extended his lead as the event’s all-time top points scorer, pulled clear of Bernhard Langer as the all-time foursomes specialist, and has now won more matches than anyone else as well. Well beaten in the singles by Bryson DeChambeau, but then he has always been stronger in a pair than by himself.

A curate’s egg of a week for the Englishman. Assuredly not at his best as a whole – it’s not like it’s difficult to tell when he’s unhappy with his work – and yet there were moments of real quality. Like a few others on the team, he showed he has a big heart too. His long iron into the 17th on day one was this observer’s shot of the week. Partner Jon Rahm described it as good a strike as he has ever seen and he followed it with another of similar quality onto the last to earn the pair a deserved half. Met more than his match on Sunday in the shape of Justin Thomas but he will surely be back for more and clearly relishes the competition.

At face value, a chastening week for Europe’s brightest young star. Actually, he never looked out of place in this company, which is a huge compliment. Five games was a stretch but Harrington had few options and repeatedly turned to the Norwegian, which tells its own story. He took on the cream of the American team all week and never took a backward step. Richly deserved his half in the singles against Collin Morikawa.

Hugely entertaining to watch. Even though his long game didn’t always allow him to dominate, he was a handful for all he encountered. Or at least he was until he met Patrick Cantlay. A gloriously old-fashioned golfer and personality, the Irishman’s guttural roars and startling jigs brought much-needed passion and joy to the muted European cause. But it wasn’t enough to avoid a heavy defeat at the hands of the relentless Cantlay in the singles.

In another team on another week, his obvious struggles wouldn’t have been quite so exposed. The problem was that Europe could only hope to compete at Whistling Straits with the Northern Irishman operating at his very best. Even then, there’s no guarantee he would have won all his games so it would be simplistic to say that his form cost Europe the trophy. He obviously felt that way though to judge by his greenside interview after he had won his singles.

One delivery too far for the Postman, who certainly owes his continent nothing if proves, as seems inevitable, his Ryder Cup swansong. Unlike Le Golf National, the course was not a good fit for his game but perhaps more to the point he just didn’t play well in the pairs. Statistically among the worst drivers of the week, which says it all. Must be said that he was the stronger half of his miserable partnership with Rory McIlroy. Yet despite it all he maintained his proud and remarkable singles record. Thanks for everything, Ian.

Worth 10 men. Proved himself the undisputed World No 1 – all the more impressive since it appeared at time that he was taking on the Americans all on his own. A bull of a man, with the heart of a lion – if that makes any sense whatsoever. Understandably ran out of gas in the singles, when he ran into an inspired Scheffler. Very much part of the lineage of the great Spaniards in the Ryder Cup now.

Westwood’s renaissance peaked in March when he almost won at Bay Hill and Sawgrass. Since then, his best effort is a tie for 17th. That’s what it looked like here, unfortunately. A terribly undignified and unworthy end to a stellar Ryder Cup career. You can only hope that Westwood is really as phlegmatic about his golf as he says he is. At least he signed off with a singles win against Harris English. All power to him for that.

The Austrian was not the cannon fodder many expected and that his record over the week indicates. Unfortunately, you would have to go back to the days of GB&I in the Ryder Cup to find as challenging a time to be a rookie – especially on American soil. Never quite looked like he would have enough to change the direction of the match, t must be said.

He may have presided over the worst European shooing in living memory, but it’s hard to be too critical or make a case that a different captain could have made too much of a difference. Perhaps slightly deluded with his talk of small margins afterwards – it was a bit more than that. Doesn’t deserve to have his golfing legacy tarnished by the margin of defeat.

Do you agree with Dan’s grading? Let him know in the comments below, or you can tweet him. 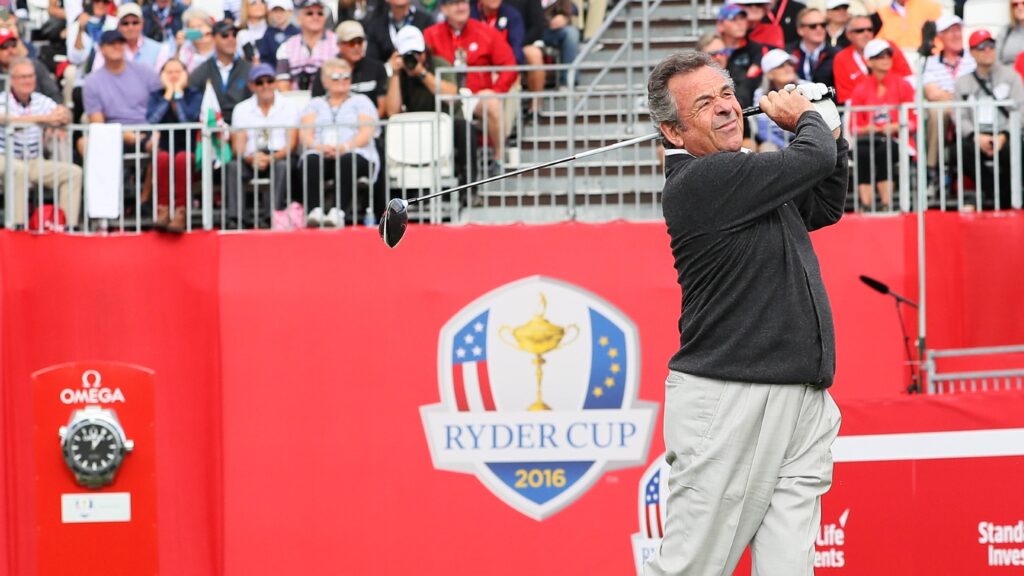