How do you get relief from an Open grandstand?

You'll have seen drop zones dotted around the Old Course. But why are they where they are? Rules of Golf expert Steve Carroll explains

Have you seen the size of some of the grandstands at The Open? Coming into St Andrews, you can make them out from miles away.

It probably isn’t a surprise, then, that they’ve got the potential to draw in a competitor’s ball like a magnet.

If you look closely around greens, close to those huge constructions, you might see drop zone circles painted in white. Wander down the right hand side of the first fairway and you’ll see half a dozen lined up like ducks in a row.

Generally speaking, no one is expecting a player to force a shot over these monoliths, which are classed as temporary immovable obstructions.

So what exactly are they? Well, it’s complicated. Difficult enough, in fact, that an R&A brochure explaining the various nuances – with very helpful graphics – runs to 16 pages. 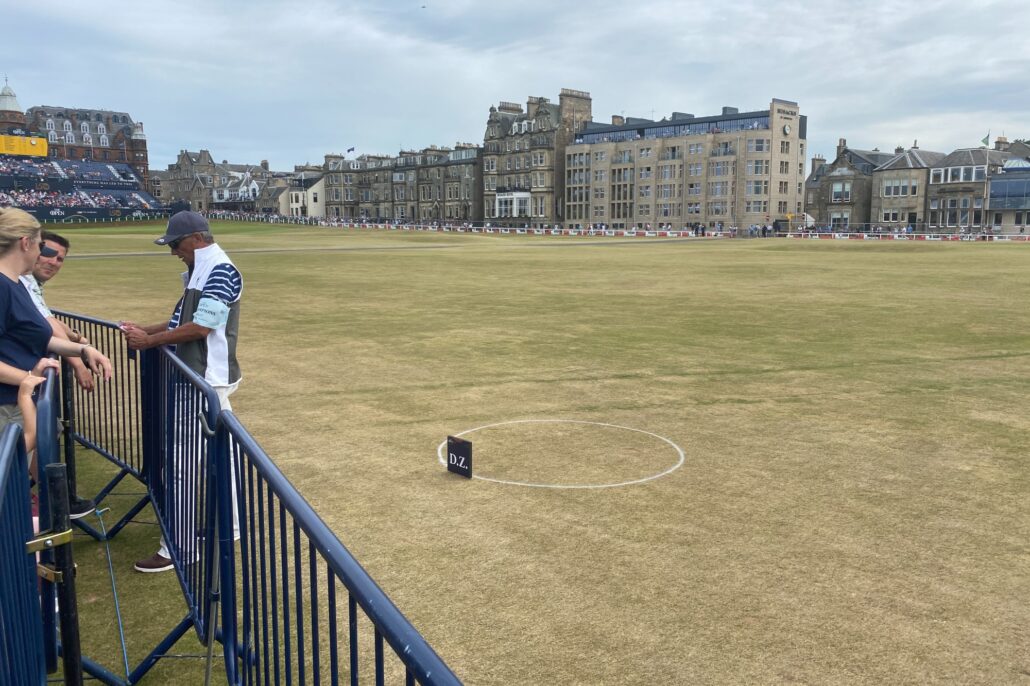 Clearly, we’re not going to go through every cough and spit here, but let’s try and break down some key need to knows…

What are Temporary Immovable Obstructions? 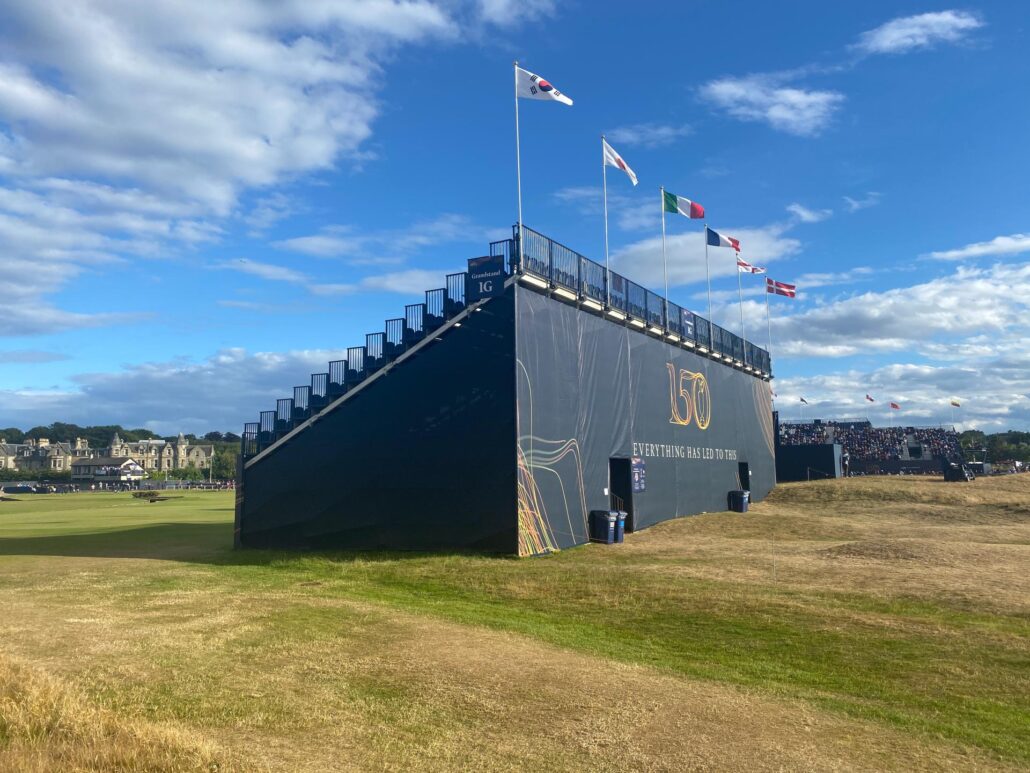 They’re not in the main Rules of Golf, for a start. Temporary immovable obstructions (we’re going to call them TIOs from now on) are dealt with by a Local Rule – it’s Model Local Rule F-23 for those who want to look it up.

The definition of a TIO is that it’s a “structure that is temporarily added on or next to the course, usually for a particular competition, and is fixed or not readily movable”.

Grandstands are the most obvious examples, but they can also include scoreboards, television towers, and even toilets.

Because they aren’t normally there, they’re not considered to be “part of the challenge of playing the course”.

What makes them different from immovable obstructions?

There is nothing to stop you treating a TIO in the same way you would an immovable obstruction. You could take relief under Rule 16 if the obstruction interfered with the lie or your ball, your area of stance or swing, or if your ball touched, was in, or on, it.

But there is a difference when this Local Rule is in play. While you can’t have free relief for line of sight under Rule 16, you can when the TIO is found on a straight line between the ball and hole.

What is line of sight interference for a temporary immovable obstruction?

Obviously, if your ball touches, lies in, on, or under a TIO, it qualifies anyway. If the obstruction is on your line of sight to the hole – on that straight line we talked about earlier – then you would also get the green light for free relief.

But it also exists in on another occasion and bear with me here because it needs explaining.

Here’s how the R&A and USGA do it: It is if a ball is within one-club length – measured on an equidistant arc from the hole – of a spot where the obstruction would then be on the player’s direct line of sight to the hole. If you’ve watched enough golf on TV, you might have heard of this referred to as “the corridor”.

Can you always get relief – even if you’ve got interference from a TIO?

No, and we saw an example of this during the second round at The Open in St Andrews when Xander Schauffele found his ball wedged in a gorse bush.

A nearby mini-grandstand was definitely in his line of sight, and would have interfered, but the American didn’t get free relief because it was considered that “playing the ball as it lies would clearly be unreasonable because of something other than the TIO”.

In Xander’s case, the bush.

How many attempts is it taking you to get out of this? 😅🤔 pic.twitter.com/fvRBQhkNll

You’re also not allowed to try and manufacture a free drop.

The rule says “there is no relief when interference exists only because the player chooses a club, type of stance or swing or direction of swing that is clearly unreasonable under the circumstances”.

There’s more too. When it comes to line of sight relief, you’re not going to be able to call for a free drop if the TIO is miles away, or to be more technical “it is clearly unreasonable for a player to play the ball far enough that the ball will reach the TIO”.

How do I take relief?

We’re just going to look at balls in the general area here – take a peek at the Model Local Rule for what to do in bunkers or penalty areas.

If you had interference from, let’s say a scoreboard, you’d find the nearest point of complete relief where “both physical and line of sight relief no longer exist”. That’s your reference point. You then have a one club-length relief area from which to drop – no nearer the hole, of course.

It’s worth saying again – there has to be complete relief from both physical and line of sight interference by the TIO. 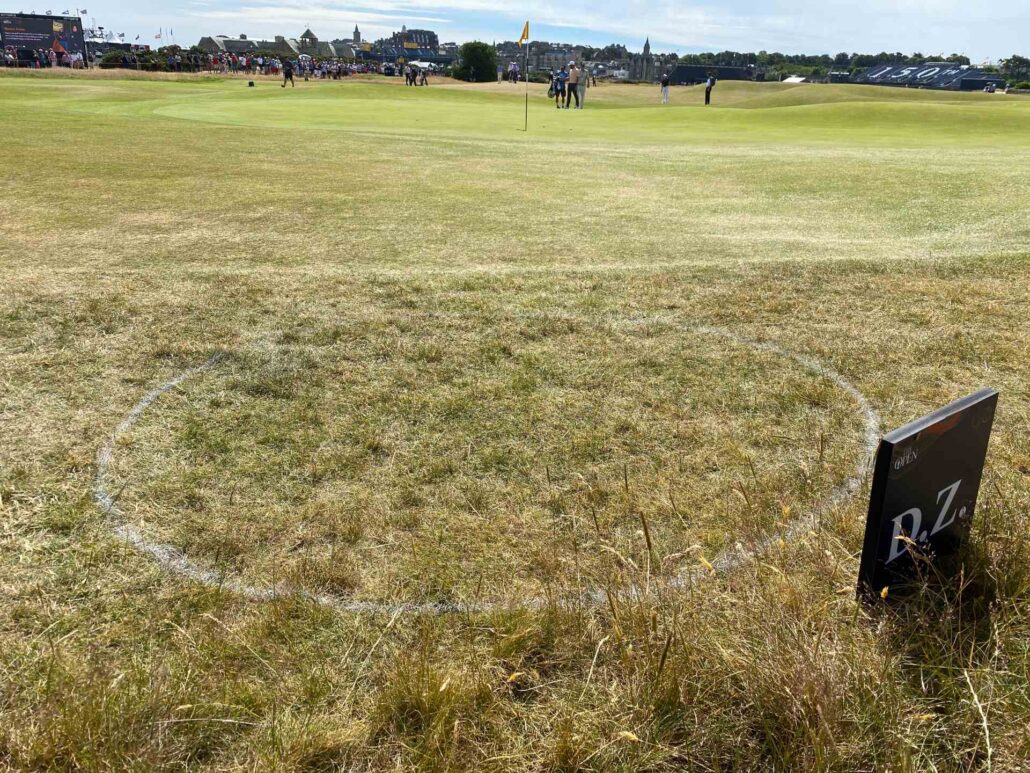 Why are drop zones used?

This where you see those little DZ circles comes into play. They can be either optional, or mandatory, and they essentially speed up the process. If they are compulsory, a player must use them to take relief.

When there’s more than one, for example on a particularly big grandstand, the competition committee should make it clear to players which one they are meant to use.

We’ve really just scratched the surface here, and if you want to know more – like what to do if your ball is ever lost in a TIO (if it’s known or virtually certain to be in it, you’re going to be OK, or how you go about it when either side relief is allowed, then make sure to take a look at the R&A’s Rules Academy.