The side of The Open you don't see: Our Rules of Golf expert takes us behind the scenes

Steve Carroll went to Open Qualifying to get an idea of what goes on and suddenly found himself thrust into the thick of it! So we asked him to give us a peek behind the curtain

I will never play at The Open. But I can always say I refereed at one. For Regional Qualifying at Alwoodley, I was privileged to join the officiating team.

With a landmark tournament – the 150th – on the horizon, the field at the West Yorkshire course was sprinkled with top class talent looking to secure their place at Final Qualifying the following week.

My original idea was simple. Shadow the on-site referees and give you a behind-the-scenes glimpse of what it’s like to be part of the world’s oldest major.

But that plan changed unexpectedly – and thrillingly, for me – as the event got under way. The R&A allowed me to don a lanyard, pick up a radio, and take my rule book out onto the course as a referee. I will forever be in their debt.

It was an incredible couple of days, and it began on Sunday lunchtime – around 18 hours before the first group was due to tee off.

Let me take you through what happened… 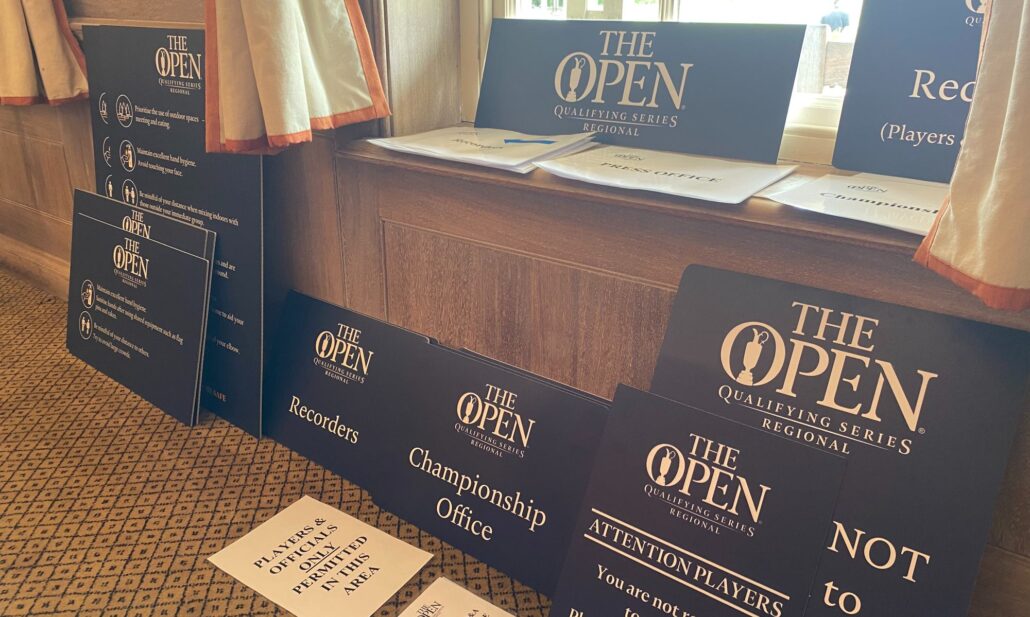 I meet the Member-In-Charge, Charlie Crummey, and the Chief Referee David Rishworth just after noon. The room we are standing in is full of paraphernalia bearing The Open logo: signs, sheets, player information, leaderboards, tees, pencils – all of which will soon be deployed around the Alwoodley clubhouse and course.

It’s a memorabilia hunter’s dream and there is no mistaking what everyone is playing for.

Phil Askew, an England Golf championship panellist, joins us as does Paul Coulthard, straight from duties at The Amateur Championship. A fourth referee, David Row, has already been on site to look around and will arrive tomorrow for the competition.

We pick up a copy of The R&A’s ‘hard card’, which details the terms of competition and Local Rules that apply to all the governing body’s events.

There are also Alwoodley’s Local Rules to read, an evacuation plan to consider, and a timing sheet for competitor pace of play. From there, we move on to the course itself. 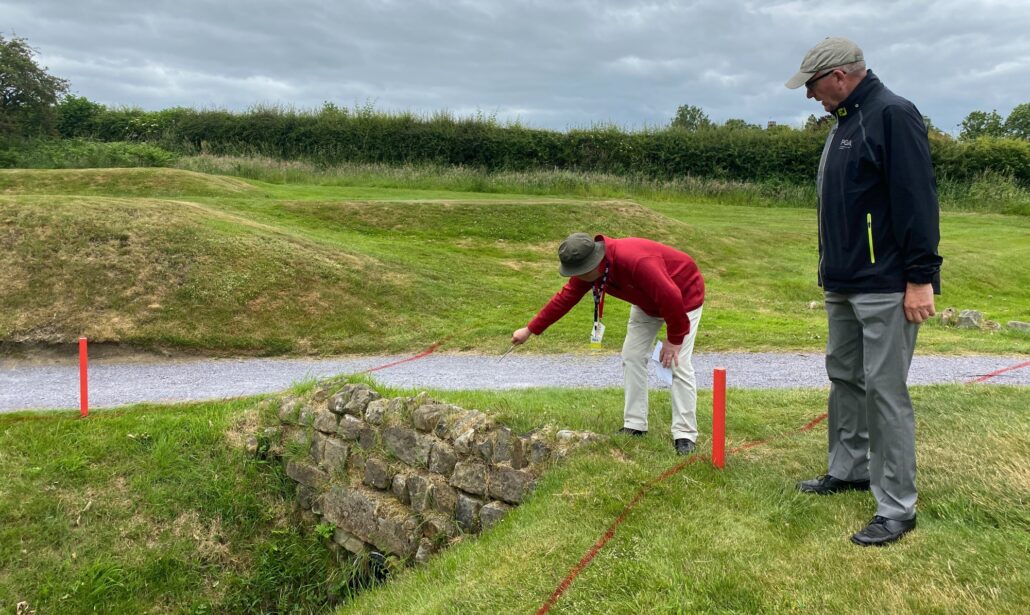 This is a diligent piece of work which, as a player, you will never really see. It takes us upwards of three hours.

David leads us round the course and we look at everything: all the boundaries, the course markings, the penalty areas. Does this spot need to be ground under repair? Is that bush going to be an issue given where it intersects the out of bounds line?

We even consider the status of a set of stairs attached to a boundary fence, which sits off to the left of the 10th fairway. The attention to detail is incredible.

The practice putting green, which is between the clubhouse and 18th green, grabs the attention of both David and Phil. There is a Local Rule which states that it isn’t a wrong green but is ground under repair. That potentially gives a player the option of either taking relief from the green or playing it as it lies.

It’s decided by the team that it is, in fact, a wrong green and relief must be taken. And, would you believe it, during the tournament a competitor’s ball lands on that practice putting surface.

David outlines the results of the walk and goes through any changes that need to be made to the course and the Local Rules. They will need editing, publishing, and given to the players and starters.

The play-off holes are determined. It will be sudden death, if required. The 1st, 2nd and 18th will be used. It’s now more than four hours since we arrived on site, and the preliminaries are complete. We’ll reconvene on Monday for the qualifying competition.

The first group is out at 6.45am and I arrive at the course just after six.

Charlie gives me a buggy and a radio so I can communicate with the other referees.

As the opening groups start their rounds, I stay by the 1st tee. Out of bounds runs all the way down the left and there may be some nerves among the early competitors.

Three groups in and I can see the spotters down the hole waving back towards the clubhouse. A ruling is required. Off I go in the buggy.

This is happening a bit quicker than I anticipate – it’s barely past 7am – and there’s a tingle in my legs as I pull up close to a bunker.

But the nerves disappear quickly. I surprise myself by taking some time to think. I give the player the answer – it’s a simple situation involving the lie of the ball. The realisation suddenly dawns that I’m going to be OK. 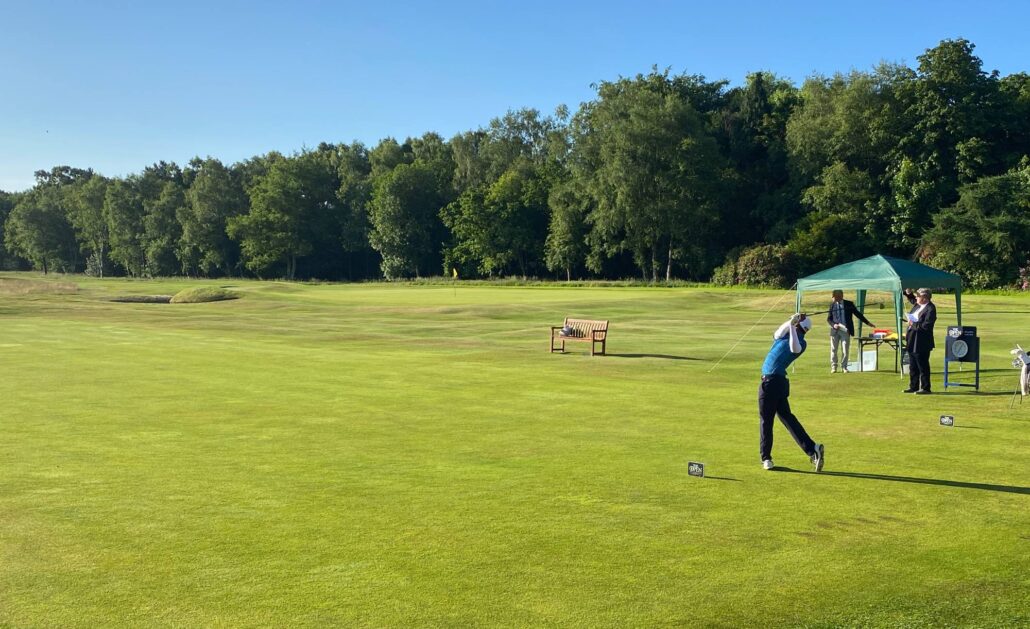 I spend much of the day patrolling a little quadrant around the 3rd, 15th, and 16th fairways. This proves a busy spot. The rough to the right of the 3rd and left of the 15th is particularly thick. I amass more than 15,000 steps helping players look for their balls. There is a lot of walking round in circles and my stopwatch – remember it’s a three-minute search time – gets a heavy workout.

There is also a penalty area to the left and back of the 16th green, and the odd wayward shot is finding its way there.

Referees have often told me the job is 99 per cent waiting and 1 per cent panic. But I find myself quite busy.

I walk a player through lateral relief for an unplayable ball on the 15th and do the same again with another for back-on-the-line relief on the following hole. Both times the ball is in a bush.

A player asks me what will happen if they lift a pine cone and it moves their ball. Another wants to know how to take lateral relief after their ball lands in a penalty area.

It’s all relatively straight forward stuff if you know your rules but the players appreciate an official on the scene and it’s proving great for my confidence.

Earlier, Charlie gives me a tremendous piece of advice which serves me well. Across the 16th fairway, a player is waving in my direction. He wants a referee.

Charlie, who can perhaps see the sense of anticipation in my eyes, holds on to my buggy for a second. Count to 10, he tells me. Collect your thoughts. And if you’re even a fraction unsure, get on the radio.

It proves invaluable guidance. The question involves one of the tournament’s Local Rules. I know the answer, but I sense the player just wants to hear it from someone else too. I get the decision confirmed on the airwaves and move on.

I’ve now convinced myself of a couple of things, which will be key as I hope to progress as a referee. I have no issue giving a ruling to a player. That sounds silly, right? It’s part of the role.

Most of my work with the Rules of Golf, though, has been done purely in the book. It’s one thing reading them and understanding them, it’s another recalling them under pressure when a player is asking you a question.

I’ve also wondered how I would react when having to give a ruling in front of spectators – many of whom are the family or friends of a player and may hope you’ll rule in their favour.

I discover I don’t really notice them. As soon as the question comes in from the player, I am one-dimensional in my focus. This is a great relief.

I’m on the course for 13 hours but it goes by in what seems like a flash. It might not always be like this – the weather won’t always be as glorious – but the hours tick by quickly and I’m consumed with enthusiasm. 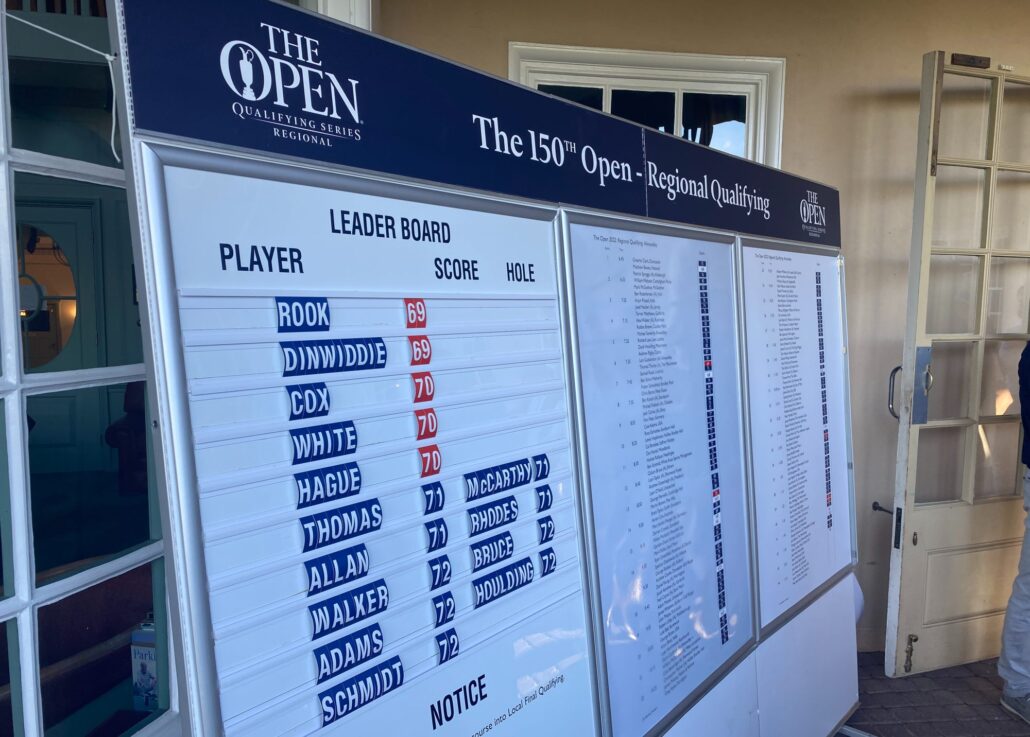 Shortly after 7pm, the final group meets the recorders. But play isn’t over yet. There are 10 spots on offer for Final Qualifying and the leaderboard reveals the last place has not yet been determined.

There will be a play-off and six players contesting it. It’s lots of tension for the competitors and more drama for the remaining spectators.

It also requires organisation and Charlie and David Rishworth, who are well planned for this scenario, are quickly into a groove.

We will have two groups of three and the players draw numbers which determines their position.

The first trio will play out the opening hole and then wait by the side of the green for the three behind to do the same.

The scores are read out and, if there isn’t a winner, those remaining in the play-off will move on to the 2nd.

I’m a spotter, along with Paul. I’m standing at the 150-yard marker and waiting for the players’ tee shots in the first group. It’s my job to see where the ball lands and ascertain if there’s a situation that might require the referee’s attention. Is the ball in a bunker? Is it in a bad lie? If a ruling might be required, David and Phil, who are the officials with each play-off group, will have an idea of what they are facing before they get to the situation.

As it turns out, the play-off is brief. David Houlding, in the first group, makes a brilliant birdie which none of the other players can match. He claims the remaining spot at Final Qualifying.

I’m hoping it will be a springboard to get more refereeing under my belt. I’ve passed the Level 3 exam and I am keener than ever to put the knowledge I have gained into practice.

I am indebted to Charlie, David, Phil, Paul, and David Row, who were hugely generous with their time, help, and advice.

To have played even a small part in The 150th Open was an inspiring, magical experience. I hope it’s the first of many.