It's The Open's newest hole ready to torment the world's best players – but how did we get on?

When golf's oldest major returns to Royal Liverpool in 2023, the stars will find a new par-3 to pit their wits against. We put our skills to the test on the rota’s latest addition

I imagine Rory McIlroy will be looking for a little better than ‘no score’ when he comes face to face with The Open’s newest hole in 2023 – ‘Rushes’ at Royal Liverpool.

For the rest of us, though, anything is possible at Hoylake’s latest addition, a 134-yard par-3 that will play as the penultimate hole when the Claret Jug comes calling but is the 15th for members and everyone else.

There were plenty of eyebrows raised when the Wirral club announced that architects Mackenzie & Ebert were going to make such a substantial change to a course that only returned to Open duty in 2006 after a 39-year gap.

Those who know the club well shouldn’t have been so surprised – they’ve never been afraid to get the diggers out down the years and make changes if they felt it would improve the layout.

Even so, there’s nothing quite like this hole anywhere else at Hoylake and the hope is for no shortage of drama, with the title on the line, when it makes its championship debut.

That was certainly the case when I had the chance to take on the challenge late last year. 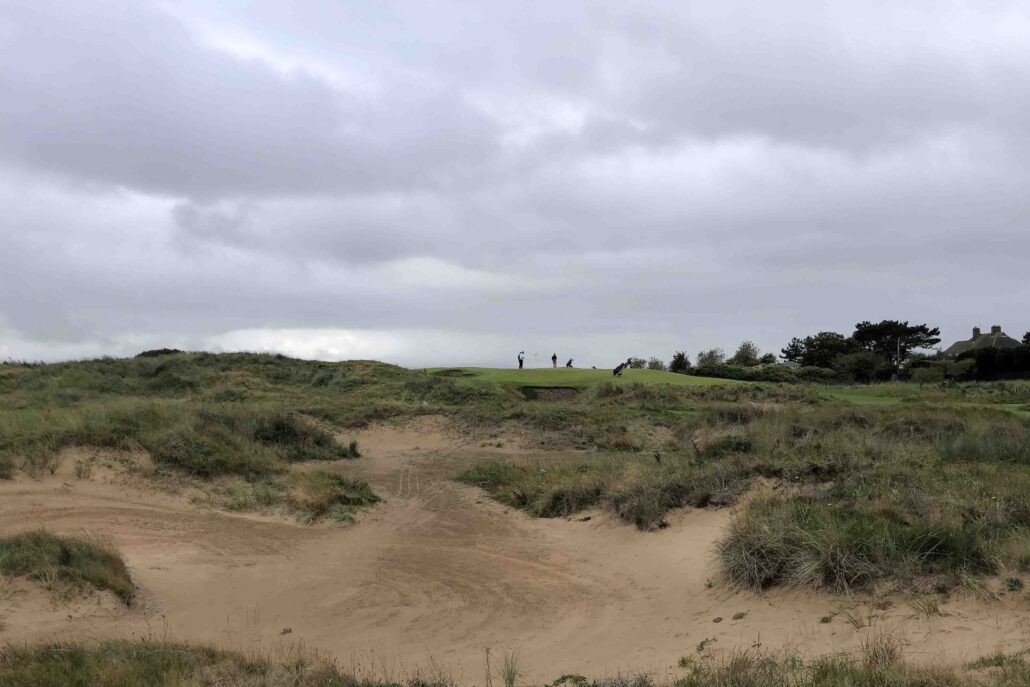 On a routing that’s pretty flat, the view from the tee to what looks a little like a skyline green – as the hole climbs uphill – is quite different to anything that’s gone before.

It really shouldn’t be any more than a flick for the Open contenders but, with the wind playing a little into, I had an 8-iron in hand.

I struck it pretty nicely and it certainly had plenty of height, so I was somewhat surprised to see it come up short.

And this is where the fun begins – because you’ve really got to find the putting surface to put a positive number on the card.

The sand on the way to the green won’t come into play unless you seriously top it but the trap lying right in front is a significant challenge. Get caught in the top of that and there’s no escape.

Anything that is a little left or right is also going to find a deep bunker sitting on either side of the green.

I somehow managed to find a small no man’s land between the front bunker and the putting surface. With an awkward stance, even from here it was still a blind shot past the front of the green and I managed to de-green it. This is not that hard to do as it slopes off the back and is basically dead.

So you’ll stand on the tee and be disappointed if you don’t put down a 3. But a 5, or worse, is realistically in the offing without some care.

And if, or when, you’ve eventually holed out just spend a few seconds taking in the view. It’s a remarkable shot over the estuary and around what is a remarkable hole and a great addition to the Open legend.

Have you played the new 15th at Royal Liverpool? How did you find it, and what did you score? Let me know in the comments or tweet me.