How did we get on playing one of golf’s most famous holes?

As the European Tour returns to The Belfry, we popped down to play the Brabazon course and that tempting tee shot on the famous 10th

You can watch our attempt to take on the world famous 10th hole at The Belfry, which hosted the Ryder Cup four times, in the video above, or keep reading for our Played by NCG review…

Played by NCG: The Belfry

Is it really that far away? The sign tells me it is 284 yards off the yellow tee. A flick through the yardage book confirms this to be true.

It’s 214 to carry the stretch of water and hit that narrow strip of dry land that forms the front edge of the green.

It’s not a one in 10 shot for me. Every stat I’ve ever assembled on a tracking device tells me it’s too far. I’m just not that long.

It’s perfect for a fade, and yet I hit a ‘draw’ that goes ever further left the more the pressure cranks up.

But there’s a voice in my head tormenting me, goading me, exhorting me to give it a go. ‘You didn’t come here to lay up.’ You’re right, I didn’t. Not at one of the most iconic holes in golf.

So the driver comes out of the bag, along with a deep breath, and I wind up the backswing.

I’m sure you’d already figured out where we are – the 10th hole on the Brabazon course at The Belfry and a short par 4 of utter delight.

How did we get on? You’ll find out in this video, where I’m joined by Alex Perry as we take on one of the most famous shots in golf…

What can you expect from The Belfry?

Seve Ballesteros elevated the 10th hole into folklore – firstly at the 1978 Hennessey Cup and then during Europe’s Ryder Cup heroics in 1985 – by doing something the designers originally didn’t think was possible. He drove the green.

So nowadays whoever comes to tread those same footprints has to tee it up and smash it hard, as well as taking a crack at the equally symbolic approach to the 18th – a place where Christy O’Connor Jr soared and Fred Couples was sunk four years later. 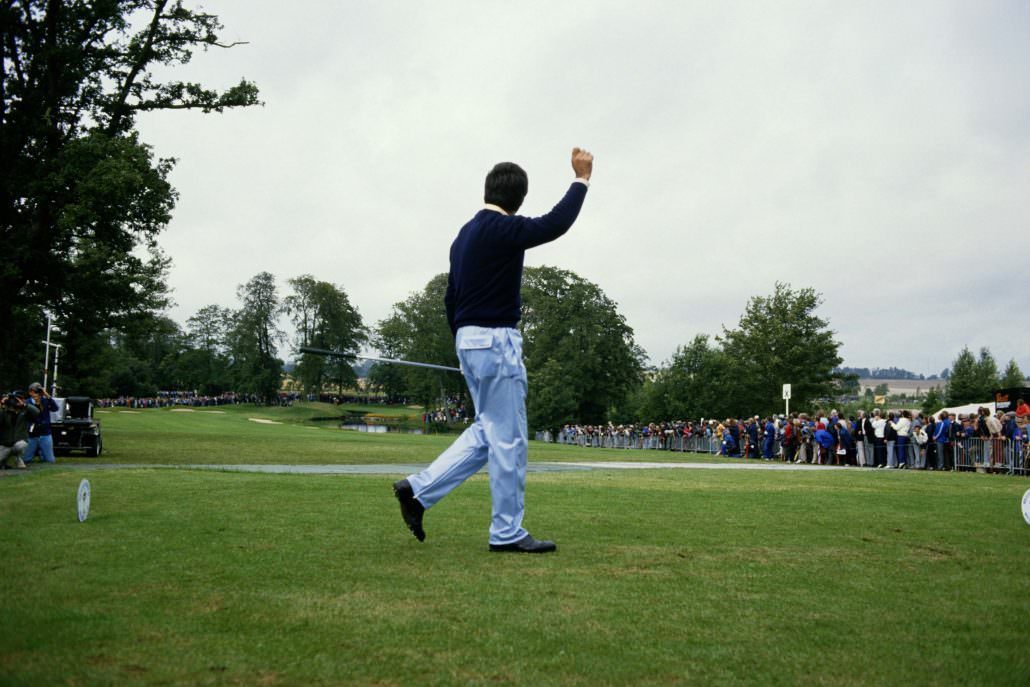 Visitors demand a Ryder Cup experience and the team here make sure they get it. It’s always impeccably presented and the greens are among the fastest you’ll ever play.

There’s something of a contrast between the front and back nines of Peter Alliss and Dave Thomas’ design. There’s a continental resort theme to the former, with enough water to send you scuba diving if you’ve erred on the reckless side with the number of balls in the bag.

The back – barring the obvious start and finish – feels very different but there’s enough strategy throughout to make it an obvious matchplay favourite. 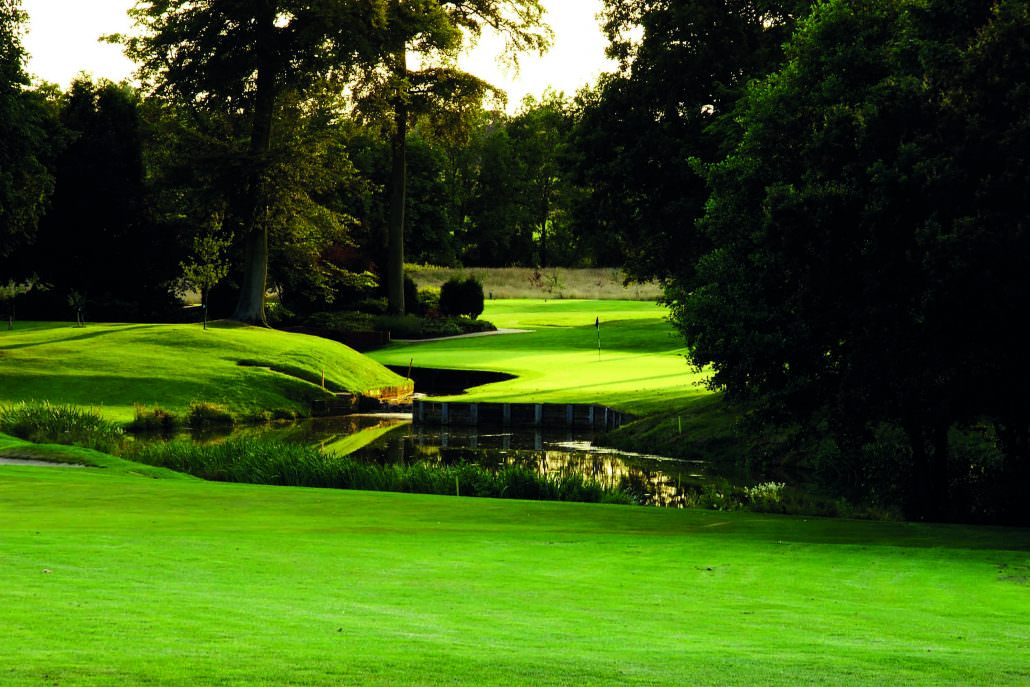 Anyone who doesn’t focus on the 10th and 18th is lying. Face it, they’re the reason we so urgently want to play the course. But there are other memorable moments.

The approach on the 3rd, to a green that stands astride the lake, is a very fun or nervy shot – depending on your mood at the time – and similar feelings arrive at the 6th depending on how far down the left you’ve risked from the tee.

The slightly elevated tee at the 12th, and a green that feels like it sits in the trees, makes for quite a shot – and not just for the water that runs up the right side of the putting surface. The single bunker that sits on the left will grab more than its fair share of balls.

Tell us about your best bit?

Still waiting to learn what happened on 10? Well scroll back up and watch the video!

Well, I didn’t find the green, nor did I take an early splash dive. Instead, I snap hooked it left and didn’t pay homage to Ballesteros in any form.

So why would this count as a best bit? Because I managed a par. I chipped on, almost sank a 30-foot birdie putt, and settled for a regulation 4 on one of the most famous holes in golf. I’ll take that, thanks very much.

Alex was much more adventurous but his high shot clipped the huge trees that sticks out on the left. Still a par nonetheless, and he could at least say he’d attempted to summon the spirit of Seve as we walked off to the 11th. 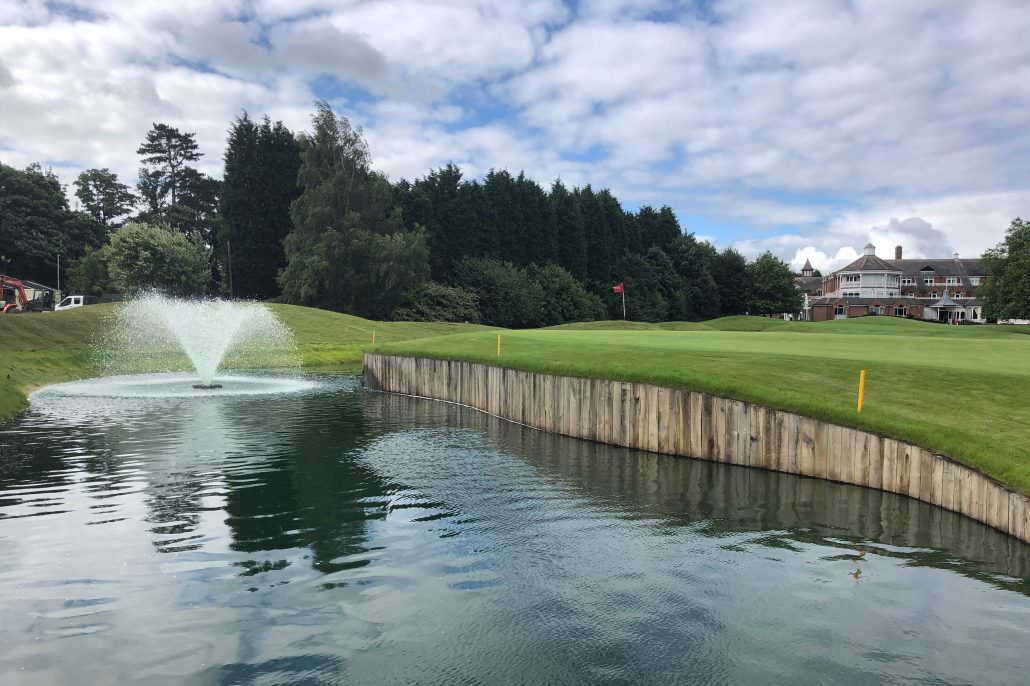 I’ll stay for a day or two and take on the Derby and PGA National courses. The latter’s closing hole has recently had a makeover and looks a much more exciting finish with water carved into the green. No card will be secure.

Finally, where is The Belfry?

On the edge of Sutton Coldfield, in Warwickshire, The Belfry is a fairly convenient drive wherever you might be in the UK, located as it is just off the M42.

Have you played The Belfry’s Brabazon? Or, indeed, any of its golf courses? Let me know how it went in the comments, or tweet me.