A walk in the Pines: Lee is elegance personified in US Open win

Minjee Lee was picture perfect as she strolled to a record-breaking win at the US Women's Open. Now, writes Matt Cooper, the real test is to come

Quietly, neatly, with the minimum of fuss – just like her golf – Minjee Lee has been telling us for the best part of a year that more major championship success was on her radar.

The Australian’s victory in last week’s US Women’s Open was on trend with the previous three editions of the championship hosted by Pine Needles Lodge & Golf Club because that wonderfully old-fashioned test – and visual treat – has the uncanny knack of producing quality winners, and somewhat flat finishes.

Annika Sorenstam won there by six shots in 1996, Karrie Webb ended the week eight clear in 2001 and Cristie Kerr triumphed by two in 2007.

The trio played their part last week, too. Sorenstam competed in the tournament for the first time since 2008, Webb was sending messages of support to her successful compatriot all week, and Kerr’s caddie 15 years ago, Jason Gillroyed, was again on the winner’s bag.

His latest boss made Sunday a relatively straightforward exercise because, after ending the third round three blows clear of the field and opening the final lap with a brace of birdies, she was rarely in trouble, eventually able to miss a tiddler on the final green and still win by four.

In her 40th major she had claimed her second win, but that doesn’t come close to telling the full story – in her first 36 she landed just two top six finishes. In stark contrast, in her last four she’s won the Evian Championship, finished fifth in the AIG Women’s Open, been 12th (having held the first round lead) in the Chevron Championship, and now triumphed in the most prestigious major of them all.

It’s impossible to overlook the impact of her weekend thrust at the Evian last summer. No winner of a woman’s major in the 21st century has overcome a greater end-of-round deficit than the 10-shots she trailed the leaders at halfway. It’s a somewhat niche record, maybe. Perhaps more relevant is that in finishing with sensational rounds of 65-64, and then winning in extra holes, she had finally conquered major championship nerves.

Onlookers often expect a first major win to prompt a second (and maybe more shortly after). In reality, it rarely happens. Lee, however, had a quiet confidence that there might be more to come, as revealed in multiple chats to the media ever since.

“It’s kind of like a monkey off my back,” she admitted after the Evian victory. “People have said a major is just around the corner but it’s easier said than done because everybody is so good out here. I have high expectations for myself, though, and I really do feel like I can play a bit more freely, especially in the majors. I’ve ticked it off and now I can set some new goals.” 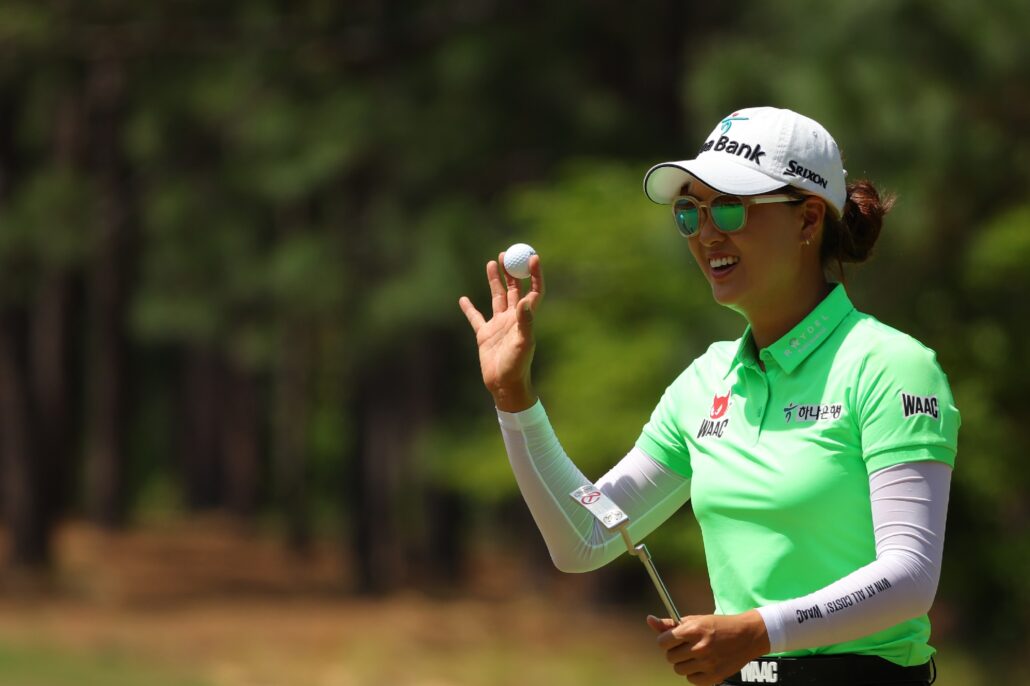 In one sense, those thoughts were typical of every new major winner but ahead of this year’s first major, the Chevron Championship, there were more good vibes, ones that were in character in being uncomplicated while also revealing a growth in confidence.

“I don’t feel too much different as a person,” she said. “But golf-wise there’s a little more belief in my game. It’s maybe a little subconscious but it’s there.”

When winning the LPGA Founders Cup last month there were more hints and this time a little less coy.

“I’m super excited for the events coming up,” she said. “We have a really great stretch coming up and I obviously want to play well at the US Open. That’s one of my all-time favourite events and I’ll take this momentum in there.

“I feel like I’ve been hitting it really well and I’ve completed a lot of good work on my putting. There’s always room for improvement, but I’ll be in pretty good shape.”

She then told us something we already knew.

“I’ve always been very even-tempered, very calm,” she said. “I’m not really too emotional. I wish I could show a bit more of my emotion, but this is just the way I am.”

If we knew then that her chilled outlook was well-suited to the US Women’s Open test, we also knew that she had failed to land a top 10 in eight championship appearances. Even more remarkably, in 14 weekend rounds she had failed to break 75 no less than nine times.

She mocked that record last weekend, carding 67-71 to confirm the win. “It’s been my dream since I was a little girl,” she said afterwards. “It’s the one that I always wanted to win and, now I’ve done it, it feels amazing.”

Can she claim more major triumph? We should always be wary because post-major chatter is always a little skittish. But Lee is now maintaining good trends and breaking bad ones. It’s a combination every bit as elegant as her game.

MORE FROM MATT COOPER: How South Korea’s golfers battled discrimination to dominate on the biggest stage