Entered the Masters ticket lottery? This is how likely you are to get lucky

Ever wondered if you were wasting your time filling in that application form? Oddsmakers have now had a go at predicting the chances of nabbing a precious Augusta National ticket

It’s a tradition unlike any other. No, I’m not talking about the tournament.

I mean the strange summer ritual when social media golfers share their collective pain – by posting the screenshot revealing they’ve been yet again rejected for Masters tickets in the annual lottery.

“We have completed the ticket selection process for the Masters Tournament and we regret to inform you that your application was not selected.”

Yes, I’ve had that painful email every July for the last decade and a little piece of me dies with each rejection. 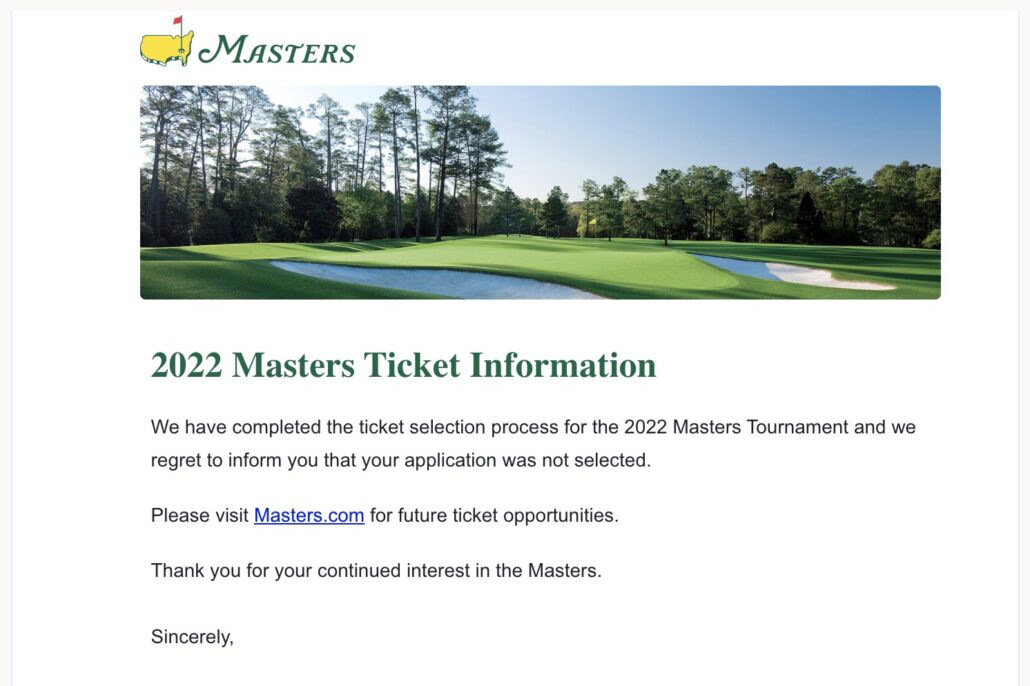 I’ll wonder why I’m even filling in the application, but you’ve got to be in it to win it, right? I’ve often thought about the likelihood of success. Is it a needle in a haystack? What are the chances of my name being pulled out of the hat and getting me feverishly booking April flights to Georgia?

Now one bookmaker has had a go and estimated the odds of winning the Masters lottery for a single day tournament ticket to be just 0.55 per cent.

That’s about 1 in 200 in old money. Better numbers than winning the National Lottery – that’s currently estimated at just over 45 million to one – but worryingly close to the odds of falling to your death, which is 1 in 218 according to the National Safety Council.

Let that sink in. You’ve only got a slightly better chance statistically of seeing those luscious fairways then you have of tripping up and smacking your head on a kerb.

To work all this out, Bookies.com estimated 40,000 patrons each tournament day, with around 18,000 taken up by weekly badge holders.

With 22,000 theoretically up for grabs for each round, they took a punt on the number of applications – settling on two million every day.

While they admit there’s a pretty large margin for error, 0.55 per cent feels, anecdotally at least, as if it’s a figure that might have some legs.

After all, we all know some lucky sod that’s managed to bag a spot. So, let’s keep trying. 2023 is definitely going to be our year…

Do you agree, or is everyone’s maths way off the mark? Have you succeeded in the Masters ticket lottery? Let me know in the comments, or tweet me.