'Norman hit it into the clubhouse and that was that'

Mark Calcavecchia won the most dramatic of play-offs against Greg Norman in 1989. He talks us through it in his own words

Mark Calcavecchia was a five-time PGA Tour champion and 10th in the world going into the 1989 Open at Royal Troon.

But he was nowhere to be found in the list of favourites going to Royal Troon. Not in a field that included defending champion Seve Ballesteros, Greg Norman, Tom Watson, and Nick Faldo, who had won the second of what was to be six majors at the Masters just three months prior.

Calcavecchia had only played in two Opens beforehand, finishing a respectable tied-11th on his debut and a missed cut the following year. But he might not have been there at all if it wasn’t for his wife.

‘Calc’ takes us through the story of the week he became Champion Golfer of the Year.

“My first wife was pregnant with our daughter, and she was due the Sunday of the Open, so I almost didn’t go. My wife said, ‘No, go to the tournament, I have got a good feeling for you.’ She was probably just trying to get me out of the house for a week.

“In my first practice round, Mark O’Meara and I played with Curtis Strange and Arnold Palmer. My first practice round at Royal Troon playing with those guys, I just loved every hole. I knew this course was right up my ally. At that point you are not thinking about winning or anything, you just want to go out and have a good tournament and enjoy it. As it turned out it was an amazing week.

“I didn’t dislike one single hole on the course. I was playing well, but oddly enough the whole round I never thought about winning the tournament because Wayne Grady was at least 5 shots ahead of me. I was struggling in the middle of the round, through the Postage Stamp and all the way through 11. I was in the bushes on 11 and I ended up on the back of the green about 50 feet from the hole. I didn’t even clean all the junk off my ball, I just got behind it and hit it. My caddie was still about 10 feet from the hole and he saw my ball rolling and yanked the flag out. My ball rolled right into the middle for a par.

“On 12 I hit a weak drive, a terrible 5-iron, short left of the green. The pin was back left and I had no chance, so of course I flew it into the hole. From then on I didn’t miss a shot for the rest of the day.

“When I was on 18 I knew that Greg Norman had shot [a course-record] 64 and he was in at 13-under-par. I knew I had to birdie 18 to tie him and have any chance. That was really the first time I got nervous. I stood over an 8-iron, right in front of the bunker, and I backed off. I rarely back off, but this was a big shot. I hit it in there about three-and-a-half feet left of the hole.

It was the first play-off in an Open for 14 years and the first to use the four-hole aggregate format, which had been adopted in 1985. Calcavecchia, Grady and Norman would play the 1st, 2nd, 17th and 18th.

“I was down to one ball and in case something weird happened I had to borrow three balls from Tom Watson for the play-off. I asked the R&A official if we were going back to 18, and he replied, ‘No, we’re going back to 1.’ I said, ‘Seriously? Hole 1 is the easiest hole on the course, that is a strange choice for a sudden-death play-off.’ He said, ‘No, we are playing 1, 2, 17 and 18.’ I was so relieved. Obviously I was nervous, but it definitely helped relax me knowing we had four holes.

“I was in my own little bubble. Of course, Greg birdied the first hole of the play-off and I thought, ‘Here he goes again.’

“On 2, I hit my 9-iron a little fat so it went to the back fringe. I had a 30-footer and I made it. Greg pours it in on top of me from 12 feet and I was like, ‘Man, is this guy going to birdie every hole?’ Although, I knew he had two hard holes left so I was still in it.

“We both hit good shots into 17, which is a super hard hole. Greg’s ball went just off the green and mine was on the left side of the green. Then I saw something I couldn’t believe, and I still can’t believe it 31 years later – he chipped it! He had one piece of grass in front of him that wouldn’t have had anything to do with it. He took out an 8- or 9-iron and chipped it.

“I said to my caddie, ‘Can you believe he is chipping this? I’d be putting this so damn fast it would make your head spin.’ He chipped it and it went about 10 or 12 feet by the hole. I don’t know if he regrets not putting it, but he missed the putt and we were tied going into the 18th.

“I got up on 18, and back then I never hit a 3-wood off the tee. I either hit a driver or a 1-iron. This time 1-iron wasn’t enough. I hit a weak flare slice out to the right, and the reason I did that was because in regulation the drive I hit was about 90 per cent max and I was only four yards short of the bunker. I knew that the bunker was reachable with the adrenaline flowing. I gave up on it and hit this weak slice. It was OK, there wasn’t much rough and it was kind of wispy.

“Then Greg got up and blasted one straight down the middle with a little cut. I was standing on the left side of the tee, and [Norman’s caddie] Bruce Edwards said, ‘Beauty, Greg.’ He picked up his tee and they started walking.

“But I was still watching it, and I’m thinking, ‘If this kicks a little bit right, it is going to catch the edge of that bunker.’ I saw it bounce, and it went about 20 degrees to the right, just enough to go in the bunker. I watched it hit the lip and roll back down, and he had no idea. They were 30 yards from the tee. I was like, ‘He’s dead, he’s going to have to chip out.’

“I got to my ball and had about 201 to the flag. I hit the best shot of my career. I hit this 5-iron that never left the flagstick. It was probably a 4-iron shot, but the last thing you want is to go over that green. It landed in the middle of the green and rolled up there. It looked like it was two feet from the hole from 200 yards back. It was still seven feet short, but it looked like a tap-in.

“So that is what really forced Greg’s hand. He tried to hit it as far as he could out of that bunker, which he did, but he hit it right into that cross bunker 50 yards short of the green. Then he hit the next one into the clubhouse and that was it.

“It was probably the best golf year of my career.”

Mark Calcavecchia was talking on the Open Podcasts. Listen to the full episode below, on Apple Podcasts, or on the Open website. 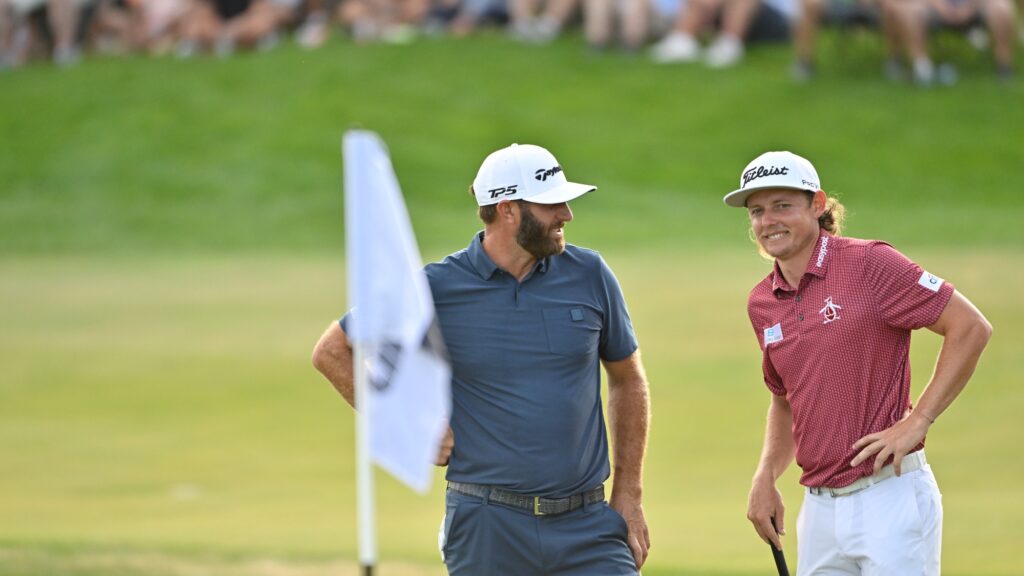