Forget the defections and the headlines. This is how you ‘grow the game’ – with the smile of a child and a pro so passionate she swells with pride every time she introduces someone new to this fabulous game.

As ambitions go, Hannah Crump’s desire would probably stretch the dictionary definition of the word. She wants to get a club in the hands of as many women and girls as she possibly can.

If that feels like a lofty ideal, though, the professional who coaches with Ignite Golf at Stonebridge, near Coventry, is having a huge impact. The popularity of her classes has skyrocketed over the last couple of years, and she coaches around 150 women each week.

“That’s a cross between group coaching and individuals. I have a lot of offers and a lot of variations,” she said. “The biggest thing for me was finding my niche. I realised I’ve got such a passion to grow this game and that’s really what I focused my attention on.

“So rather than just doing everything, I said a couple of years ago I just want to grow the women’s game and I was able to have that time to promote it.”

She added: “I have been professional for about seven years, so I kind of at the start knew I wanted to grow the women’s golf community, but I would say in the last two years numbers have absolutely accelerated. For me it’s been so, so, so special to see these numbers grow and see more women getting on board.”

At the recent Aramco Team Series tournament at Centurion, Hannah and the team at Ignite Golf were the beneficiaries of the five-leg event’s Power Up initiative.

It is aimed at backing projects that are making a difference at grassroots level for junior and female golfers. 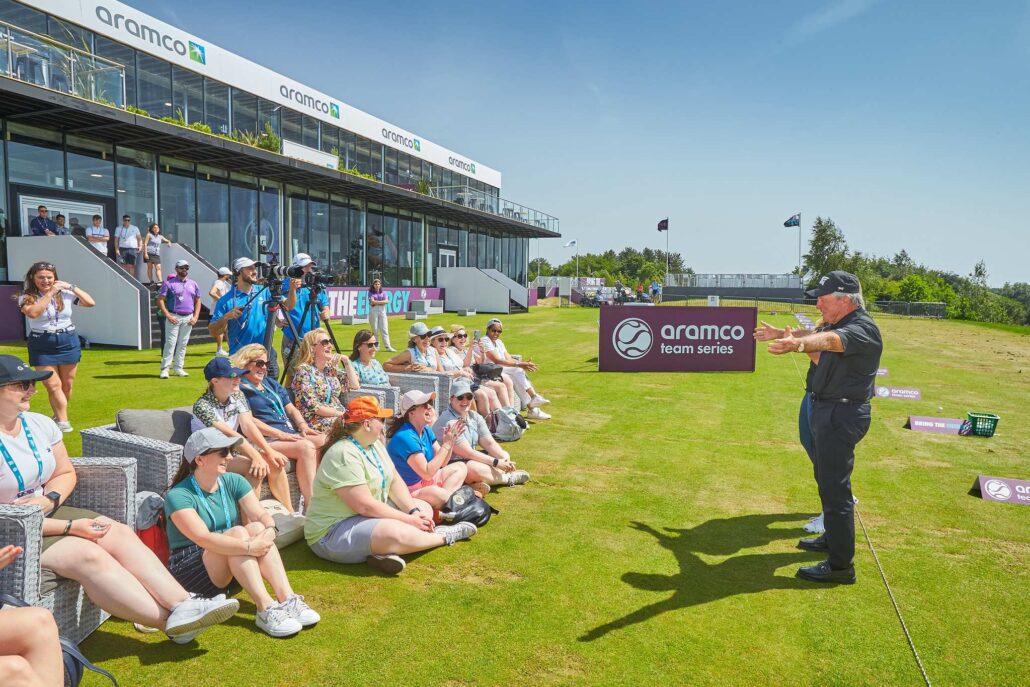 Hannah took more than 25 members of her female coaching classes to Centurion and they were delighted when nine-time major winner Gary Player dropped in to give them an impromptu lesson.

She added: “I had absolutely no idea. I’d done something similar last year and I was thinking, ‘Who is it going to be?’

“I was talking to the women and I heard a few gasps and there he was. It was special. It was a massive, amazing, experience.”

“To receive this donation as part of the Power Up initiative is unbelievable. I am at a point where the next stage for Ignite is to grow – and I’m trying my hardest to build everything,” Hannah continued.

“So to be able to have this kind of support, it just means I’m going to be able to do things quicker. It means everything can to be bigger.

“At the moment, I’m capped at the equipment that I have and I’m capped at the clubs that our players can use. For me, the story is now about accelerating this even more, and now we can really do that and put so much back into the game that I love.”

Of the impact she was having on those she was working with, and the satisfaction that came with starting those pupils on a lifetime journey through golf, Hannah said it was “beyond my pride”.

“It’s why I do it. When I’m working and I’m looking around and I see groups of women go out – knowing that they started with me – the pride and the passion is beyond everything.

“For, and I always use these words, I’m going to put them on a golfing journey. This is not just a quick golf lesson and off you go.

“We’re going to do this together and it’s a full journey. I love nothing more than them flying the nest, joining local golf clubs, but knowing that we started off here. It’s beyond my pride.”