Reckon you can beat the LET's finest? This single-figure handicapper took the challenge

We put Steve Carroll in a pro-am team right before a Ladies European Tour event. So how did he get on? We'll let him tell the tale

The excuses come early, not that anyone’s listening. I am in poor form – just look at my handicap record. I haven’t got out much recently. No one is buying that one either.

The announcer says my name, I stare down the first fairway at Centurion Club and try to zero in on a target.

God, it looks tight. The legs are wobbling. Badly. The darting eyes betray the ice man exterior I’m so desperately trying to give off.

It’s the day before the Aramco Team Series event at the Hertfordshire club and I’m part of a pro-am team taking on a Ladies European Tour course set up in all its finery.

So how would I get on? I just creep into single figures these days – my WHS index is 9.0 – and I want to give you an idea of how tough the set up can be at an elite event and, in turn, show just how good these players we watch on TV are.

I’m going to look at length, fairways, rough, greens and pins, before trying to piece it all together.

If you’re going to carry on, you might want to read through your fingers. It’s going to get a little bit ugly…

Last year, I took on the Heritage course at London Club the day after the Cazoo Classic. I trudged to the back tees – all 7,327 yards – and just got beaten up. I knew it was going to happen. It was the whole point of the piece.

This time at Centurion, my pro-am group was led by Amy Boulden and I played from the same tees as her, weighing in at 6,521 yards.

I’m sure many of you are thinking it will have been significantly easier this time, given the 800 yard change in distance, but I’m now going to dispel you of that notion.

My average is 237 yards. And I just couldn’t keep up at Centurion. That’s a familiar feeling, actually. The courses I play at home don’t differ too much from this in terms of distance and I’m of the firm belief – not that anyone is going to listen – that a lot of us play courses that are way too long for us.

We were playing a scramble format called ‘Par is your Friend’. Amy picked the best drive of our group, we played from there, and then played our own balls in.

We did not pick my drive anywhere except on the par 3s.

It was a good job too as we would have had some very long second shots. I struck the ball OK – I’m not going to say it was my best driving day – but we’d have been hitting long iron or hybrid far too frequently.

Even when Centurion opened up after the first half a dozen holes, the forced carries and the proliferation of par-5s still got into my head. Hitting approaches off interestingly sloped lies into well-guarded greens would have destroyed my handicap had it been a counting round.

I had the acute sense of déjà vu. It was Heritage all over again. Distances can be deceptive. 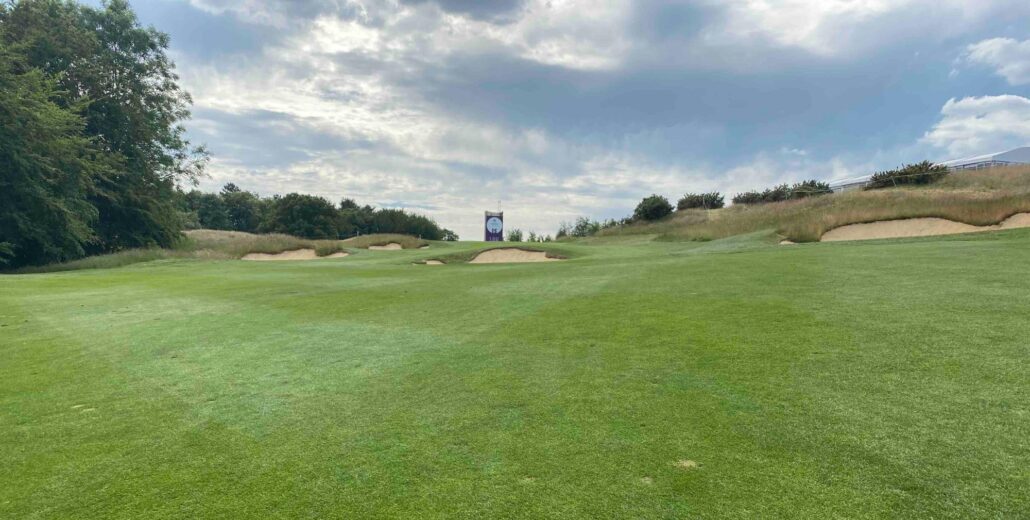 Wow. Centurion’s greenkeepers have done such a good job. If you just think about the amount of play that’s been going on there – two consecutive weeks of tournament golf – they were just fantastic. It’s a good job I don’t often take a divot, I’d have been guilty about spoiling this fabulous grass.

They were really tight, too. I’ll freely admit there were a couple of thins in there as an iron nipped in and took one off the surface.

But my best shots of the day all came from irons making contact with this spectacular grass. 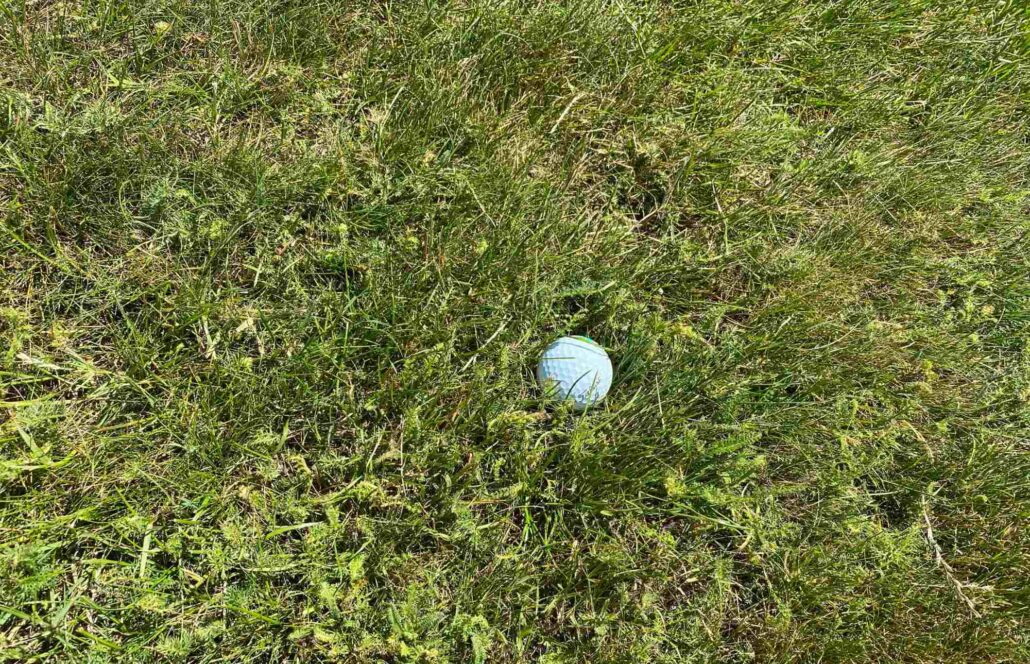 This wasn’t what I was expecting at all. Given the LIV Golf Invitational had been the previous week, and seeing some of the scores on show there, I was expecting waist high stuff the moment a ball failed to find a fairway.

And it is there. If you hit it particularly wide, you were going to find long grass that looked on the wild side.

That said, the stuff I was tramping around wasn’t really that impenetrable thick grass that it’s pointless even heading towards. In places it was pretty wispy – so much so that, after crashing a hybrid against a boundary fence and getting a lucky bounce at the 6th, I was able to get a pitching wedge right into the back of my ball and hit it from 87 yards to about 10 feet.

The first cut also seemed eminently fair. My ball might have sat down a touch, but it didn’t disappear. I could get a club through it and could largely keep my speed intact. 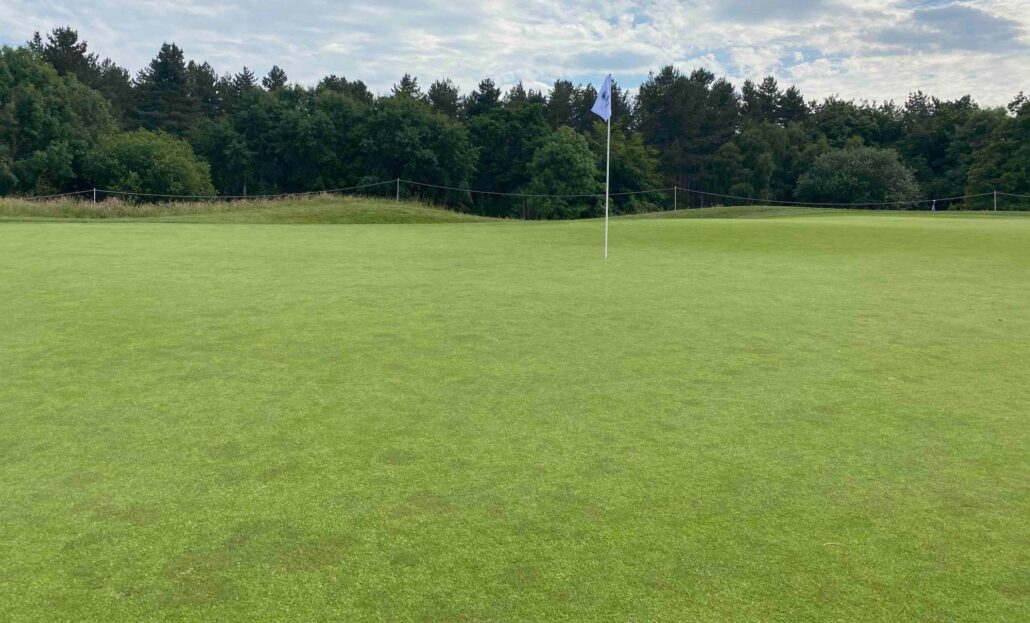 I was genuinely befuddled here. By the end I just didn’t have any clue where they were going. One putt that I absolutely swore was straight – I actually said to myself ‘I’ve found the only straight one today’ – actually ended up moving about four feet right!

These greens were so pure, I just couldn’t see the breaks and couldn’t judge the slopes. I ended up in a bit of a timid mess – poking at it and just hoping the ball would stay on line.

And this wasn’t about speed. I often think amateurs have a misconception about how fast the greens are for the pros. Yes, they were swift. Yes, you needed to be careful if you were putting downhill. But if you think it’s feather touch all the way round, you’d be wrong.

I’ve probably said this before, but I’ve played faster greens in a club championship. Will they speed them up again for the tournament? I played in a pro-am at the Portugal Golf Masters a couple of years ago and asked this exact question. The answer was ‘not much’.

While the speed might not be what you expected, what you do get is a surface that’s absolutely pure – barely a blemish or a wrinkle. Set the ball off and watch it roll, end over end. It’s just beautiful to watch.

It’s a pro-am, right? They’re all going to be slap bang in the middle of greens. Except the 17th wasn’t, that was pitched in an evil location where you had to carry a difficult front trap if you any ambitions of snatching nearest the pin. It was so dangerous, I basically ignored the flag and struck an 8-iron pin high about 15 feet away.

The 18th wasn’t much easier, a back right slot forcing anyone with a draw to flirt with the water. Guess where my ball ended up?

In fact, now you come to mention it there were quite a few pins in awkward slots. That obviously explains my putting. 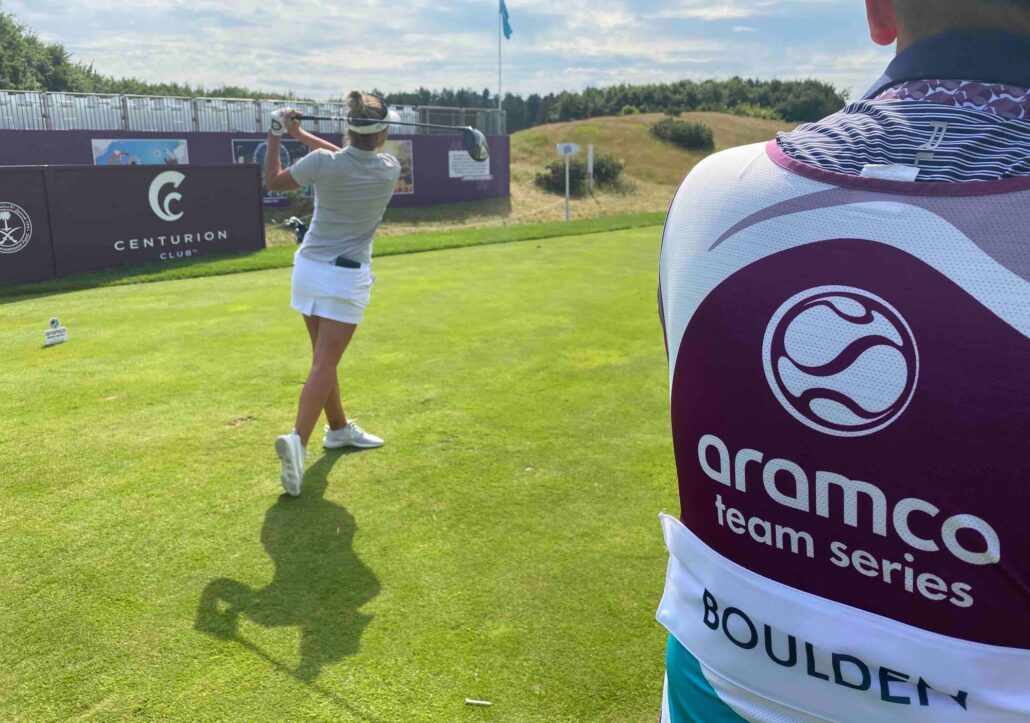 Watching Boulden hit drive after drive like a metronome – a magnificent high ball flight that seemed to stay in the air for eternity before settling into the fairway at what felt like an impossible distance away – was just awe-inspiring.

We forget sometimes, just watching on the box, quite how good these professionals are. It felt to me like she glided round the course, while I, at times, hacked it about as if I’d never played the game before.

When you find yourselves in that environment, far away from the cosy familiarity of your clubs, you can’t help but be transfixed at how they can navigate trials that simply finish the average golfer.

They sunk me in a big way. I hit some good shots, and many bad, but the level you need to reach to be able to play these types of courses with consistency is way beyond my skills – and I suspect many of yours too.

Have you played in a top event pro-am? How did it go and what did you score? Get in touch, or you can tweet me.