How do you set up a US Open course? Meet the team responsible at Brookline

Dave Johnson and his team are preparing to host the US Open at The Country Club at Brookline. BIGGA's Karl Hansell sat down with him

The Country Club at Brookline is on the Mount Rushmore of American golf courses.

It’s known as the birthplace of amateur golf in the country, stemming from Francis Ouimet’s US Open victory in 1913 – Ouimet was an amateur whose home was just beside the course.

Responsible for the maintenance of the course today is director of grounds Dave Johnson, a lifelong Massachusetts resident who joined The Country Club in 2018 after a stint at Wianno Club.

We went behind the scenes of this week’s US Open to learn more about the team that make this week’s major championship possible.

How does it feel to be responsible for the most important asset, the golf course, at such a historic club?

It’s very rewarding and I consider myself very lucky to be here. It’s a special place in America as it’s where golf took off in this country. A lot of that history is still very present when you come to this property and I pinch myself because it’s just a blessing to be here.

Every decision we make, we try to be true to the history of this club and not change or alter it. When we were preparing for the championship, we used historical photos to recapture things that used to be there but had been taken away. The feeling you get when you come here is that it’s special. It feels like stepping back in time and anything we do out on the golf course, we try to enhance that feeling.

There’s going to be a two-tee start on the opening two days of the championship. How will that impact your morning set up?

We have to have the first and 10th tees ready for a 6.45am start. We’re bringing in 100 volunteers to help our staff of 36 have the front nine and back nine prepared for that tee time. The challenge is our facility is smack in the middle of the golf course, so we’ll need to get most of the staff back here before 6.45 so there isn’t a lot of traffic on the course. We’re going to start at 4am, get out on the course by 4.15am and by 6.45am we’ll be 90 per cent done, minus the set-up crew and maybe a little watering. Then we’ll be working in the evenings to get all the other detailing done.

What’s going to be your height of cut for the event?

Our greens are cut at 0.11 inches (2.79mm), our fairways heights are 0.3 inches (7.62mm) and approaches and tees are 0.25 inches (6.35mm). The height of cut in the rough right now is three inches (76mm) and around all our greens for the tournament the rough will be close to five inches (127,m). Some of the shorter holes will have no primary rough and will go right to five inches.

The greens and fairways are a combination of mainly Poa annua mixed with some bentgrass. It’s an old golf course so we take care of it, but I have a love-hate relationship with the Poa. When it’s treated well and acting nice, it’s a great surface to putt. It’s just during those trying times in winter or the heat of summer when you’ve got to baby it along.

To me it gives an old feel to the place, because you see all these different strains of grasses growing everywhere with different colour variations. I look at it like it’s an old property with old grasses and there’s a million things growing over here. 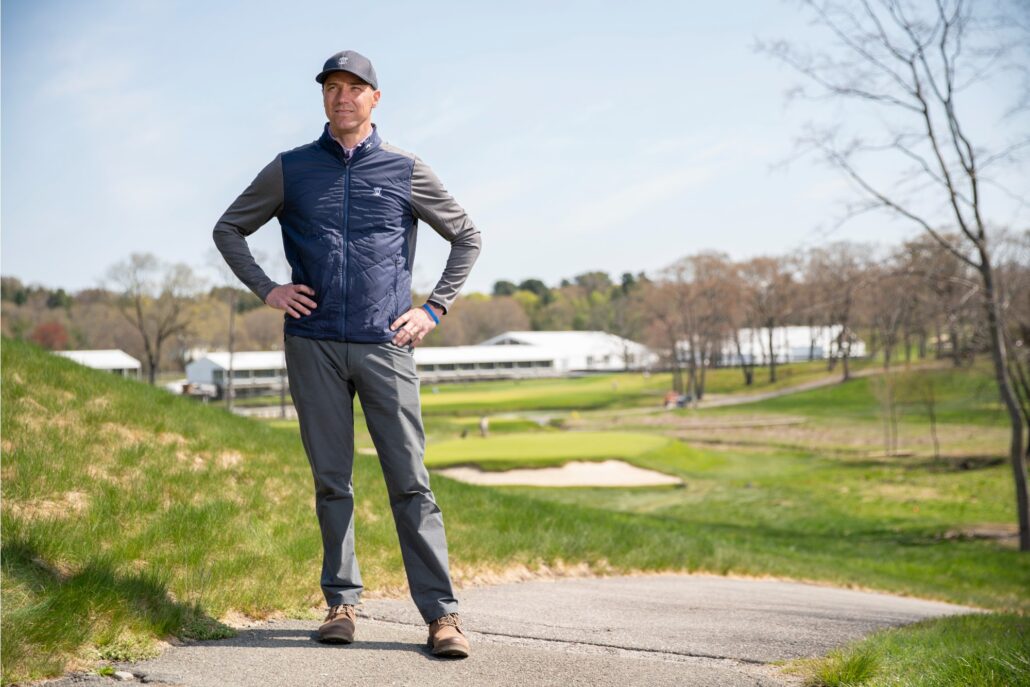 What is your daily maintenance schedule on the greens ahead of the US Open?

We’ve just been single cut, walk mowing the greens and rolling them every day. Then we’ve topdressed every 10 days. It hasn’t been a great growing spring so we haven’t been as aggressive with our verti-cutting programme and topdressing. But we haven’t had to scramble and we’re prepared.

Our green speeds leading up to the championship are around 11.5 feet every day. Our target is to get to around 13 feet in the morning and we think we can achieve that without altering much on our programme, just by double cutting and rolling. Our greens are small and that really limits where our pin locations can go.

US Opens don’t come around very often so how are you feeling ahead of the event?

I’m very excited. We’ve been preparing for so long that we’re ready and we aren’t scrambling. In our morning meetings I look at our 35 team members and I just encourage them to keep doing exactly what they’ve been doing. I say don’t get overwhelmed by what’s going on around us. We are professionals and we know how to do it. Keep doing exactly what you’re doing and we will be fine.

With 4am starts and working late into the evening, how do you keep the team motivated and operating to the high level that you require?

We want to make sure the experience for all our volunteers and staff is great, so we have education that we’re going to provide after the morning shift. Then we have facilities to watch golf at our compound as we’re actually in the landing zone of the 14th fairway and we have a nice viewing deck to watch golf. We’ll have other things to help them relax and networking opportunities for everyone and our goal is that after seven days of giving us all their time and energy, they leave with a sense of accomplishment and gratitude to us.

What do the championship days look like for you?

I haven’t lived one yet, but my plan is to hopefully sit back and enjoy it. My family is coming and my wife and two daughters will actually be volunteering with the USGA staff. They’ll be on property and I want to spend some time with them because I owe a lot to them. I’ve given a lot to this club and it’s the support of my family that’s allowed me to do that. I also hope to spend time with our 100 volunteers and supporting friends who have helped make all this happen.

With all respect to Wianno Club, The Country Club at Brookline is a big step up. How did you convince them you were the one for the job?

I stayed true to myself throughout the interview process. There was a big pool of applicants and I just kept telling myself, they either want me or they don’t.

When I joined, the biggest thing I had to learn was the magnitude of the place and get to know the people, such as the leadership team. I had to establish relationships with the people, then the committees and then finally I could get to know the property. That was a big learning curve for me, but I approached it one step at a time by checking things off and then moving on to the next one. It became overwhelming at times and I had to pull myself back and just focus.

How do you move from being a greenkeeper to being a high-level operator or director?

It wasn’t easy for me and I still find it difficult. I think before you make the decision you must think about what you love about your job. Do you want to be sitting at a desk preparing budgets, going to a lot of meetings, selling your programmes? Or do you want to work at a smaller club that doesn’t require as much of that detail? I would prepare for that adjustment better as I didn’t really think about it that way – I just thought ‘wow, I’m going to the most historic club in America!’

Are you an extrovert or an introvert?

I’m somewhere in between. I’m mainly an introvert, but I can come right out and talk if I have to. My title is director of grounds and I was hired by David Chag, who was general manager at the time. Many times in my first couple of years he would say ‘Dave, you are now a director and you shouldn’t be out there digging ditches’. That was a big learning curve for me because my love is being out in the field.

After the adrenaline of hosting the US Open is over, how do you motivate your team to go again?

That is going to be difficult. We’ve been really focused on the lead up and keeping morale where it needs to be and keeping everyone focused on doing what they need to do. I’ve been coached by David Chag, our general manager Kristen LaCount and director of golf Brendan Walsh. They said the day after the event has finished can be very depressing. The show is gone and it’s only us standing here at the end. I need to coach my team through that feeling and make sure they know we’re going to be alright. We’re going to get through it because we’re going to have a lot of work to put everything back together again.

This interview has been reproduced with the permission of the British & International Golf Greenkeepers Association.