Jessica and Nelly Korda have won two points together at the 2019 Solheim Cup, but they practically had to beg captain Juli Inkster to play with each other

The Korda sisters, Jessica and Nelly, became the first sisters to be paired together in the Solheim Cup and celebrated with a crunching win to get the first point on the board for Team USA.

What a moment for the Korda sisters who today have become the first sisters to play together in the same Solheim Cup pairing.

The American siblings were unstoppable in a 6&4 victory over Caroline Masson and captain’s pick Jodi Ewart Shadoff and won even more emphatically on Saturday morning beating Bronte Law and Carlota Ciganda 6&5.

But, their partnership may not have happened had the pair not gone out of their way to convince captain Juli Inkster it would be the right decision.

Originally, Inkster said she “wasn’t too keen” on the selection and revealed that the Kordas asked her to play together.

The more the captain thought about it, the more she came round to the idea and the sisters’ performance at the Dow Great Lakes Bay Invitational back in July all but sealed the deal.

They finished in a tied for 12th in the event which was new to the LPGA Tour and played in a team format.

Prior to that week, Jessica, who is the older of the two, had asked Inkster to observe how they played and if it went well, to at least consider pairing them together.

Jessica said: “If we kill each other, then maybe not put us together. But if we do OK, can you think about putting us together?”

Eventually, by the time it came to selecting her Friday foursomes line up, the USA captain was convinced that sending them out together was the right thing to do.

She said: “The more I thought about it, it would be stupid not to play them.

“This is not often you get two sisters on one team. They should have the right to play together.”

Both Jessica and Nelly fully justified the decision proving that not only are their games statistically similar and suited on paper, but they complimented each other perfectly on course.

How the Korda sisters won their first point on Friday

Hole 1: An opening birdie beat the European par to send the sisters 1-up after the first hole.

Hole 2: With Nelly playing off the tee, they made light work of the first par 5, carding a second birdie to go 2-up as the Europeans made par.

Hole 5: After going 3-up with a par at the fourth, another par was to follow and yet another hole won. 4-up through 5, the Americans were cruising.

Hole 7: The par-3 6th was halved with both teams making a birdie but the Kordas quickly got back on top and won the 7th to go 5-up.

Hole 9: After losing the 8th to a European birdie, the Korda bounced back at 9 and restored their 5-up lead.

Hole 10: Another par 3 halved with birdies but this one featured an impressive chip in from Jessica.

Hole 11: A par was good enough to put the visitors on the brink of their first point as they went 6-up with 7 to play. 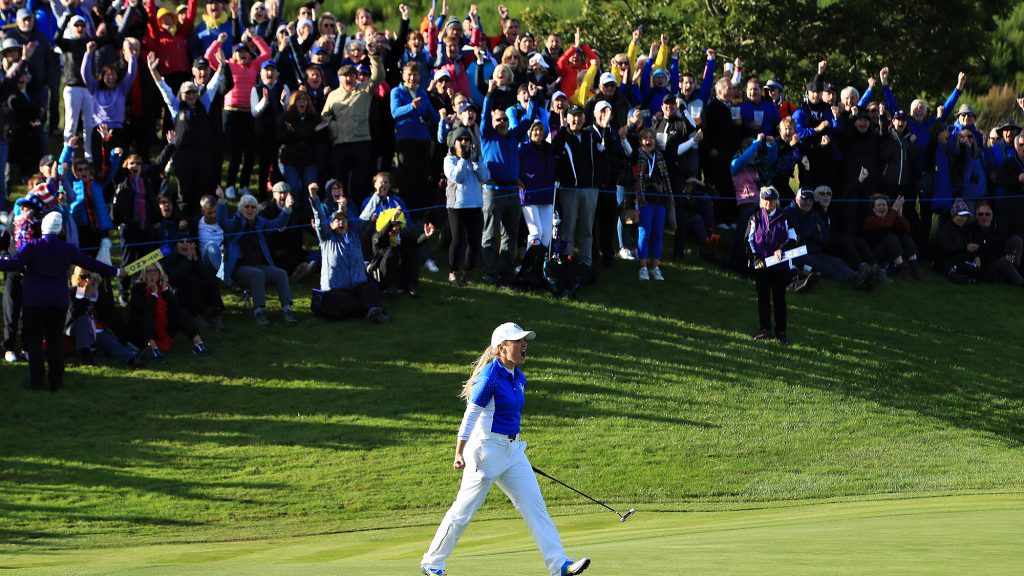 September 12, 2019
Do Not Sell My Personal Information