The Masters that changed golf forever

It’s been 25 years since Tiger Woods rolled into Augusta and turned the sport on its head. Nick Rodger recalls an unforgettable week in Georgia that saw a changing of the guard

It was a procession to a coronation. In fact, Tiger Woods’ jubilant parade to a momentous victory in the Masters 25 years ago was so regal, he should have been carried through the towering pines, dogwoods, and azaleas of Augusta National on a sedan chair.

If Gene Sarazen’s famous albatross in the 1935 Masters was the “shot heard round the world”, then Tiger’s epic episode in 1997 was probably heard in outer space.

It was a seismic moment which changed the face of golf forever.

At a tournament that did not invite a black golfer until the year Woods was born, the then 21-year-old demolished the field with a ruthless, rousing performance of power, poise, and precision.

Woods broke more records than a rampaging bull at a second-hand vinyl fair while his whopping 12-shot margin of victory left his wheezing rivals so far behind, they may as well have been playing in the previous year’s tournament.

Talking of 1996 and all that, the Augusta National greenkeepers had just about finished mopping up the debris and general gore of Greg Norman’s grisly capitulation by the time the runners and riders assembled for the ’97 showpiece.

Woods was already box office. He had been installed among the favourites despite never having played in a major championship as a professional and the weight of expectation he carried was broadly equivalent to the burden Atlas had to heave on his shoulders.

Woods had won three PGA Tour titles in his brief spell in the paid ranks but, with a share of 41st and a missed cut in the Masters during two previous outings as an amateur, there remained a general feeling that he still had his Augusta apprenticeship to serve. He hadn’t broken par in six rounds there, after all.

Norman, who had ballooned to that disastrous closing 78 having held a six-shot lead the previous year, was seeking redemption and arrived at Augusta in the midst of a 96-week stretch at the top of the world rankings.

Nick Faldo, who had taken merciless advantage of Norman’s calamity to plunder his third Green Jacket, had won at Riviera a month earlier but, as it turned out, he would never win on the PGA Tour again.
When the Englishman helped Woods snuggle into golf’s most cherished blazer on the Sunday evening, the changing of the guard was complete. The Tiger era was alive and kicking.

“It is like when Jack Nicklaus came out in the 60s,” said the distant runner-up Tom Kite at the time. “He was way out in front and everyone else on tour spent the next 20 to 30 years catching up. This seems to be the next generation.”

Nicklaus himself was equally as enthralled. “He’s more dominant over the guys he’s playing against than I ever was over the ones I played against,” gushed the Golden Bear, whose 17-under Masters record had held up for 32 years until Woods blitzed the joint. “He’s so long, he reduces the course to nothing. Absolutely nothing.”

Like a man enjoying canapes on the clubhouse veranda, Woods nibbled Augusta down into bite-size pieces. The longest club he flighted into a par-four all week was a seven-iron.

His weary opponents, meanwhile, gazed forlornly at their strokesavers and wondered if a couple of Hail Marys could help them reach the greens as they struggled to keep up.

Their prayers would go unanswered.

Like everybody, even those golfing Gods were too consumed watching Woods put on a show-stopping performance for the ages. Well, after one or two fluffed lines… 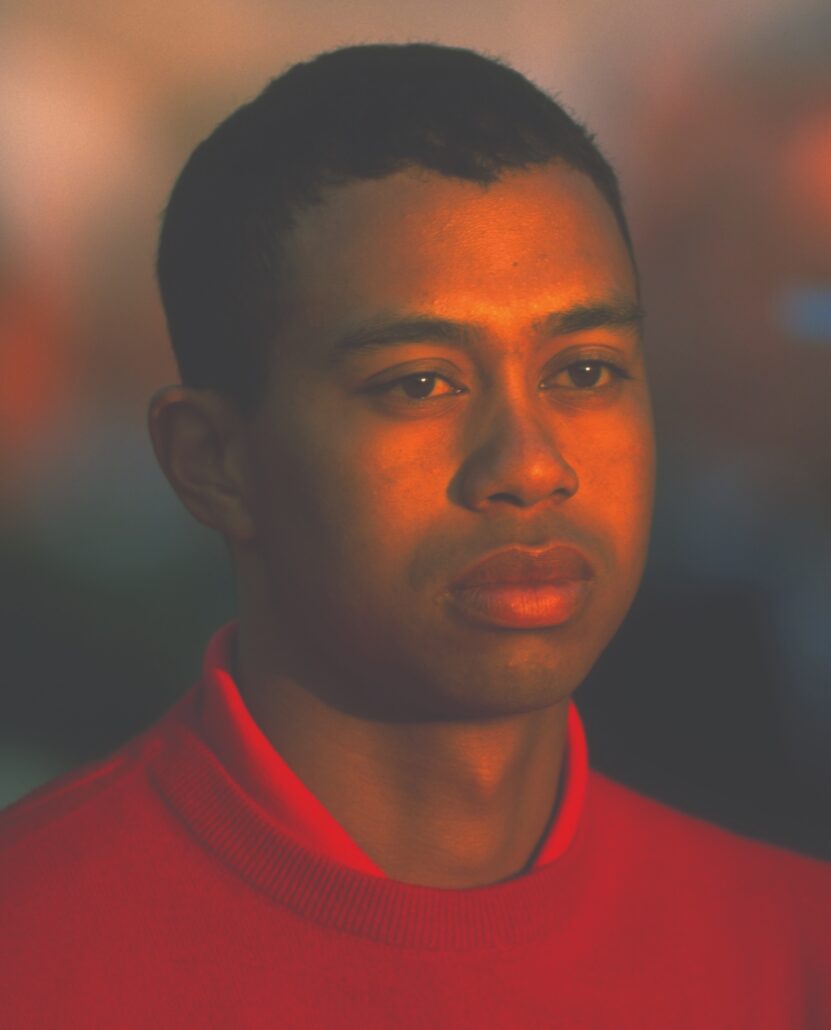 To paraphrase that old Errol Brown lyric: “It started with a miss, never thought it would come to this.” When Woods failed to get up and down on the first hole and opened his campaign with a sighing bogey, before huffing and puffing to the turn in 40, nobody would have predicted the fireworks that were to come.

Woods was paired with defending champion Faldo on day one. The new age, for the front nine at least, brought with it a false dawn. And then came lift off.

A week earlier, Woods and his old friend, Mark O’Meara, had been having a knockabout at Isleworth in Florida as the space shuttle Columbia went blasting away from the Kennedy Space Centre. “I felt both small by comparison to space travel and in awe of what man could achieve,” Woods wrote in the book Unprecedented: The Masters and Me. “I felt exhilarated sitting there.” Woods would shoot 59 that day.

Fast forward to Thursday at Augusta and a trudge to the turn at four-over. His Masters mission stuck on the launch pad.

“I was bewildered and furious,” he recalled. “I was hot inside. Just before I stepped on the tee, I let go of that anger and calmed myself.

“I was thinking of the feeling I had the week before at Isleworth, when I hit one perfect shot after another.

“The feeling washed over me. My heart rate slowed. I felt free.”

From that point, Woods raced home in six-under to lurk just three off the early pace set by John Huston, whose caddie may have been tempted to mutter the line, “Huston, we have a problem.”

After that spluttering start, Woods clattered up through the gears with a thunderous surge that just about seared scorch marks on the turf. “He left us in the dust, it was a special day,” Faldo said.

The old cliche says that the Masters doesn’t begin until the back on Sunday, but once Woods had made the inward half of Augusta his own pitch-and-putt during round one, an air of inevitability set in.

This feature continues on the next page, where Colin Montgomerie puts his foot in his mouth before Tiger Woods puts his foot to the floor…