The Belgian's botched putt caused a kerfuffle at the Open de France, so we asked our Rules of Golf expert to look at what happened and what should have gone down

It’s very rare in golf you get to have another go. Call it a mulligan, a do-over, however you want to phrase it, when you’ve hit the ball that’s invariably – with a couple of exceptions – how it stays.

Yet that’s exactly what Thomas Pieters got to do during the second round of the Open de France last week – and it caused quite the palaver both on and off the course.

Let’s take a deep dive into the incident, see what happened, what should have taken place, and what we, as club golfers, can learn from it…

Pieters was lining up a lengthy birdie putt on the par-5 3rd hole during the second round at Le Golf National. It was around 40 feet and, during his backswing, he says he heard a child coughing.

So kid coughed in my backstroke. I tried to stop…didn’t 🤦‍♂️ Called a local referee who called another referee who both deemed it not a penalty. That decision is final. Got told after I finished it should have been a penalty but original ruling stands. #Luckyidiot 🙄 pic.twitter.com/ifRofhmmMq

He tried to pull out of the stroke but was unable to stop the club quickly enough and chunked his putter face into the ball. With the club decelerating, the ball only travelled about six feet after making contact.

The Belgian called in a referee and explained the situation. It’s been reported that he was initially advised the stroke would count.

Another official, brought in to give a second opinion, told him that the stroke did not count and he could replace the ball on its original spot and putt again. Pieters did that and two-putted for par.

How did they come to this ruling?

Let’s get a procedural issue out of the way first. A referee’s decision is final, and a referee does not have to allow a player’s request for a second opinion.

But in an unusual situation like this, it’s usually better to get agreement and so it’s not uncommon for an official to radio in or ask another referee to come and look at an incident and give their view.

With Pieters explaining that he was trying to pull out of the stroke, and therefore had not ‘intended’ to hit the ball, it seems the second referee went to Rule 13.1d, which looks at what happens when a player in stroke play accidentally moves their ball or ball-marker on the putting green.

When that happens, there is no penalty and the player must replace the ball on the original spot. That’s what Pieters was instructed to do. 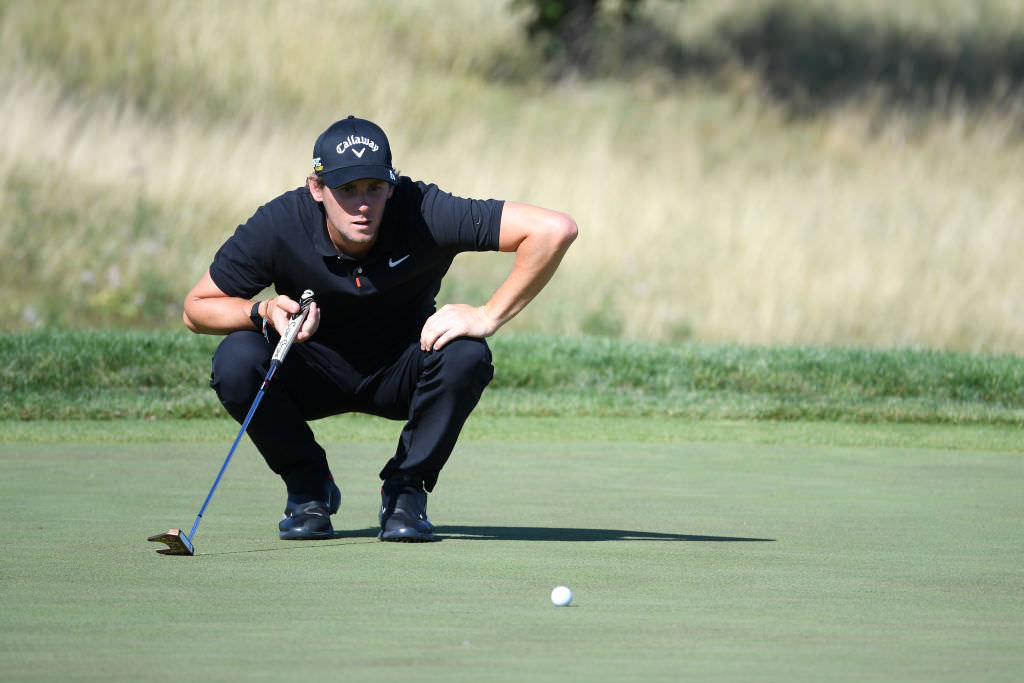 So what was the problem?

The issue was that the answer to this conundrum is not found in a specific rule but in the definitions.

But for that to happen, they need to avoid hitting that ball – either by deliberately stopping the clubhead before it reaches it or, if they can’t stop in time, by deliberately missing the ball.

Pieters wasn’t making a practice swing. He wasn’t preparing to make a stroke. He didn’t hit the ball accidentally.

He was making a stroke, tried to halt it, couldn’t stop the clubhead in time and couldn’t miss the ball. It’s a stroke.

What should he have done?

Given that it’s a golf stroke, Pieters should have played the ball as it lies – from the position where it came to rest – and tried to negotiate a 30-footer for par.

But he replaced it and putted again? Doesn’t that mean he played from a wrong place? Why wasn’t he penalised for that?

At the heart of this question is the reason why you’ll see players on tour consulting a referee for every cough and spit on the golf course.

It’s because it’s an insurance policy. If the referee gets it wrong, the player won’t be sanctioned.

Rule 20.2d says that wrong rulings will be “corrected if possible under the Rules” and if it’s too late to do so “the wrong ruling stands”.

In the 500-odd page Official Guide to the Rules of Golf, Section 6C of the the committee procedures, covering providing rules assistance to players, has a paragraph neatly covering what happened to the Belgian.

It states that: “Where a referee in stroke play incorrectly advises a player that his or her stroke does not count and to play again without penalty, the ruling stands and the player’s score with the replayed stroke is the player’s score for the hole.”

So what’s all the fuss about?

You can’t cover every situation on a golf course without a very, very, big book and, often, there are elements that can be open to interpretation.

Here, though, it was important to close any sense of uncertainty. As happens in every ruling on tour these days, social media was quick to watch it, discuss it, and dissect it.

Had it passed without clarification, would people playing their weekend competitions try and cite it on the occasions they flubbed a putt?

How could you prove whether they intended or not to hit the ball? The rules rely implicitly on player integrity but giving them this kind of control feels like a step too far.

If you’re in the process of making a stroke, and can’t stop yourself hitting the ball, it’s a stroke. Add one on to your score, play it as it lies, and try to be more careful next time.

Had the Pieters ruling not been identified as incorrect, it might have opened a huge can of worms.

What do you think? Should you be able to pull out of a golf stroke at any time – even if you then hit the ball? Or, like Thomas Pieters, should you discover it always counts? Let me know with a tweet.