'When the Champions Dinner is happening - then it hurts'

It's one of those moments in Open history that refuses to fade from the memory even two decades on. But Thomas Bjorn will never shy away from discussing his moment of madness at Royal St George's

In a year where we’re spending so much time looking back, this remains one of The Open’s most dramatic moments. Nearly 20 years on, Thomas Bjorn’s travails in the greenside bunker by the 16th at Royal St George’s in 2003 never fails to tug at the heartstrings.

Leading by two and with the Claret Jug at his mercy, the Dane needed three goes to get out of the sand and lost by one to Ben Curtis.

It would be a painful moment for anyone to remember but Bjorn must confront those memories every time the battle for The Open begins once more.

In an exclusive event hosted by Mercedes-Benz at the 150th Open at St Andrews, Europe’s Ryder Cup-winning captain in 2018 looked back on one of the defining moments of his playing career and explained how he has found peace.

Let’s allow him to tell the story… 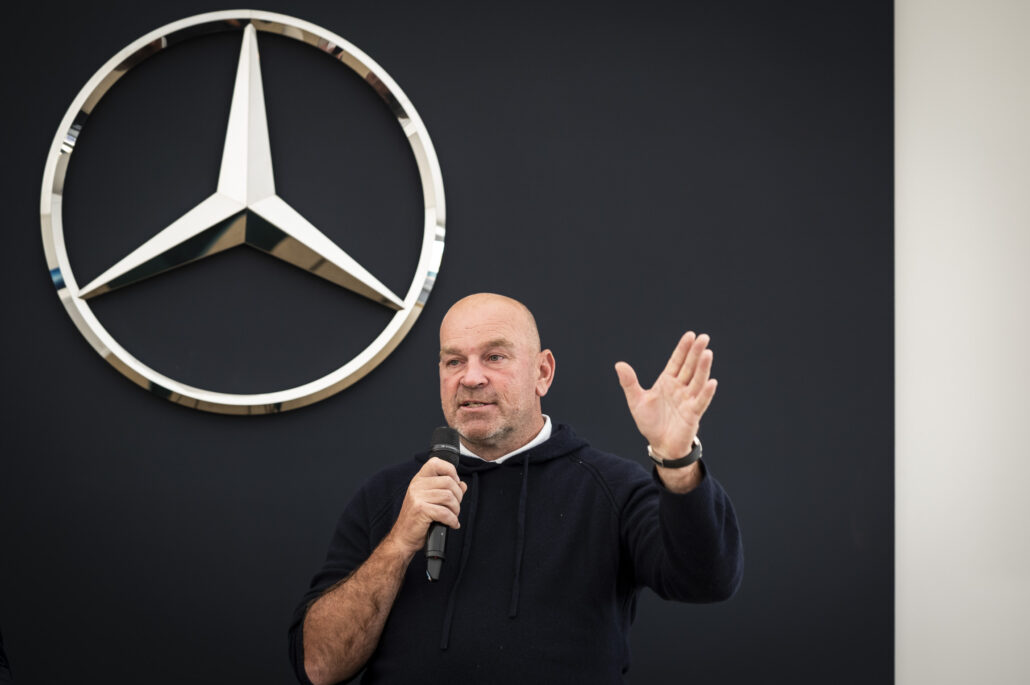 In the moment you are just playing golf. I hit a poor tee shot on 16. It wasn’t awful but it was a poor shot. I got a little bit too aggressive, and I didn’t pull off the shot that I wanted.

Then I hit a poor bunker shot and all of a sudden the ball fell back into my footprint, and then things happened that were fairly out of my control.

I was in a circumstance that anyone would find extremely difficult to deal with. But in the moment you are trying to play good shots. I played some of the best golf of my life for almost 70 holes so I was just trying to continue to play good golf.

It wasn’t like I made bad decisions. I didn’t execute golf shots, which happens all the time when you are coming down the stretch – especially in major championships. Sometimes it falls to your advantage and sometimes it doesn’t.

You don’t think about the magnitude of the situation. You think about the golf shots. You don’t think that you are in a situation that could change your life. That comes afterwards. Matt Fitzpatrick probably didn’t realise until two or three days after the US Open that his world had changed – the world he used to live in did not exist anymore.

It took a long time for me to evaluate the situation and put some perspective onto it. At least I was here in that situation at Royal St George’s, while most other players never get there at all.

That’s what I live with. I go back to where I come from, how I grew up, how Danish golf was when I came on tour and where I got to. From that, I get a lot of comfort from that situation.

If I had grown up like kids do today – in a golf club and a federation and being driven on to a professional career – things might have been a lot different. I drove my career 100 per cent all by myself – to where I am today. I take good things from that.

When you go through a career, you have dream. My dream, when I was 18 years old, was to win one tournament on the European Tour.

If you had said to me I’m going to give you one tournament victory on the European Tour I would have taken it and been delighted and happy with that.

Then your career unfolds, you become something different, and you become a top 10 player in the world – a player that people expect to win a major championship. Your mind can’t really keep up with that.

In those moments, I should have done better. But when I look back, as a 51-year-old, as a whole at my career, I’m very content.

I’ve got to live my life with what’s happened. If every day I am sitting and thinking about 2003 and that bunker at Royal St George’s, there is not much to live with. I played the game and I came up short.

I think, as a sportsman, you have to look at it that way. Even though a lot of people will think differently.

When the Celebration of Golf was happening on Monday afternoon, or the Champions Dinner on Tuesday night, that hurts because you sit and know, if the outcome had been different, you would be doing that – walking the fairways with all those legends and sitting at the dinner with all those people.

That does hurt. Your mind can’t help but go back to it but, other than those moments, I really don’t think much of it.

Not winning was a big disappointment and it took a couple of years for me to get over it, but I am proud of the player I was in those championships.

As I sit here today I am delighted with my Open record, although I am disappointed that I could not have gone one better. That is the way things are sometimes.