Want to make Stableford better? Then change the scoring system!

Steve Carroll has never been a fan of the much-loved Stableford format, so he thinks it's time for a controversial overhaul – starting with docked points

What is the point of golf? What is its purpose? Mull that one over for a second. Have you got the answer? Of course you have. It’s to get the ball in the hole – preferably in as few strokes as possible.

Given we’re all agreed this is the game’s raison d’être, why do we readily embrace a format where that isn’t always the case?

Stablefords are ubiquitous. You’ll probably play in twice as many club competitions where points mean prizes as you will adding up the number of gross and net strokes you’ve made in a medal.

There are some very good reasons for the popularity of this scoring format. It’s quicker. If you can’t score, you are supposed to pick up – none of the double figure nonsense that can blight a player’s card when every shot counts.

If your club is very busy, and there can be as many as 200 playing in a comp at my own, speed is of the essence. You’ve got to get everyone round.

Avoiding a situation where you traipse in circles hunting for a loose shot only to then trek back for stroke-and-distance is what all of us want.

It’s easier to play than medal. That’s just a fact. You can have a disaster on one hole and rub yourself down and get on with it. Avoid too many other bad holes and play well for the rest and you can still win the competition. Coming to mischief doesn’t necessarily mean coming to grief.

That’s why lots of players love it. Stableford allows them a measure of inconsistency and gives them confidence that can just slide away when there’s pressure on every stroke.

Since the World Handicap System came into effect, though, there’s been a different mood among some sections of golfers when it comes to this points-based paradise.

Scores in the late 40s, and even into the 50s, are reported as commonplace on social media. Low handicappers complain they can’t compete and question the point of entering – especially since they can put in general play scores without charge.

Data from HowDidiDo showed the average number of points scored by formerly category four golfers in competitions had risen considerably (by nearly four) from the pre-2020 CONGU system to this summer, while those of category one golfers had declined by a similar number.

The research indicated lower handicappers had previously held an advantage in such events and the changes brought in by WHS had helped narrow the gap towards parity.

I can’t say it was my experience as a single figure golfer that we dominated Stableford at the clubs where I have played but I’ll take the data as I find it.

What it shows now, though, is that the lowest average points scorers are actually the best golfers. Fairer or not, that’s still flawed.

But there is a feeling I can’t shake when I play in a Stableford. It’s that when we fail to achieve golf’s primary purpose – to get the ball in the hole, or at least in a number that’s going to trouble the scorers – we are essentially allowed to carry on without penalty.

I’m proposing we change the Stableford rules. In my Utopia you’d lose a point. So if you play a hole and can’t score, you wouldn’t pencil in a zero on the scorecard. You’d jot down -1.

Some modified Stableford points competitions already have versions of this premise. 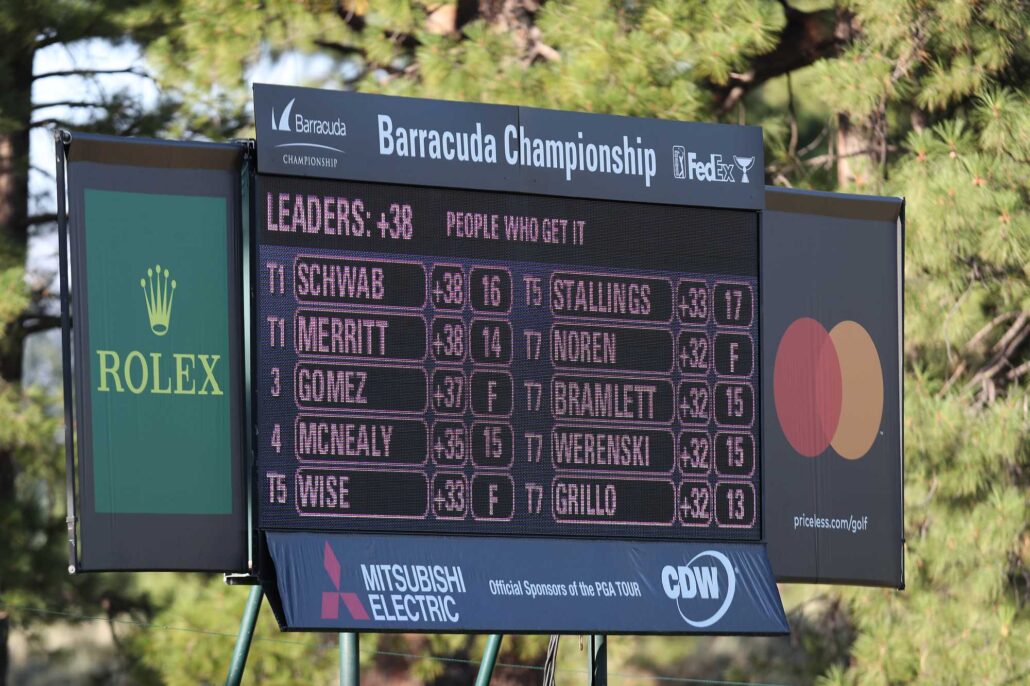 When totting up scores in the Barracuda Championship on the PGA Tour, for example, players are docked a point for a bogey and three for a double bogey or worse. They can also put down eight points for an albatross and five for an eagle.

I’m not suggesting we go this far in humble club competitions – many of us would barely get into double figures – but bringing back the whole purpose of golf and adding a small penalty to those who fail to achieve that task is surely equitable, isn’t it?

Ah, you say, but we are punished already. We don’t get any points when we blob and in a game that’s all about accumulating that’s more than enough.

Is it, though? I’ve often heard players who are having a good day and then no score say, “No real harm done.” Their day’s work is still largely intact. Their points can’t be taken away.

Look, it’s great to reward success. Birdies, eagles, and their nett equivalents should be repaid with plentiful points. It should also be right, though, that failing to fulfil the basic premise of the game brings with it a sanction.

Scoring would start to look a little more normal again. Does anyone really get any pleasure seeing 46-plus pumped in for every competition?

Higher handicappers will still be able to blast home their four and five pointers, but they’d also have to be conscious of working their way around a course. Low handicappers, without lots of shots to fall back on, would need to play as they should – precisely – to avoid a card-damaging penalty.

And we could have a bit more confidence that, to use the old horse racing parlance, we’ve all got a chance of hitting the finish line at the same time.

What do you think? Is my idea a goer or is Stableford just fine as it is? Let me know with a tweet.