Scottish golfers won’t be able to enter scores for handicaps until the New Year as the governing body moves over to a new platform.

Scottish Golf have revealed a World Handicap System/Central Database of Handicaps freeze will take place from December 15 until January 7.

It means around 200,000 players won’t be able to use the Scottish Golf app to put in scores and their clubs will not be able to send scores during this period.

The governing body have warned that even if it seems like scores are going through, “the WHS will not accept them and the handicap will not be adjusted”.

In an FAQ document, the governing body explained: “Scottish Golf are moving to a new tech provider. DotGolf will be providing the technology that support the Scottish Golf app, the website, Venue Management Systems for clubs, and the WHS.

“In order that the WHS be properly moved to the new platform, a period of suspension is needed where no new data is added. This ensures the WHS data is accurate at the point of switch over.”

Players who want to submit a score on December 14 have been asked to do so “as soon as the round is finished” and before 9pm to guarantee they will be included in the import”.

“If scores are posted after this, they can still be submitted retrospectively once the new WHS platform is live”. 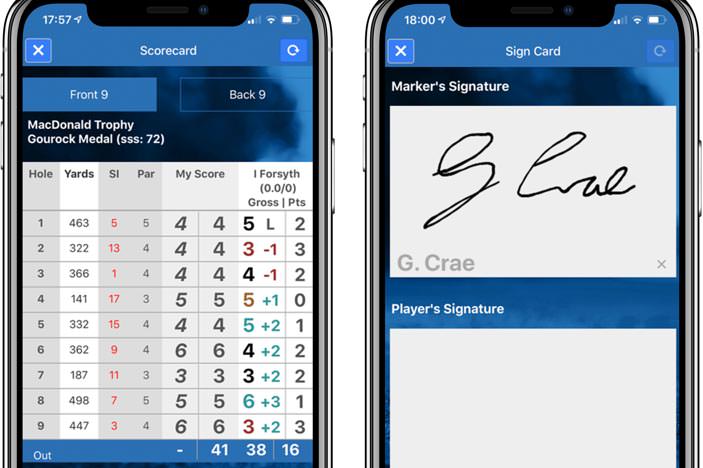 Scottish Golf have also revealed a new app will be arriving in January 2023, with details on how to register expected soon. That news might surprise some, given the current app was launched in a blaze of publicity only in 2020.

It was part of the governing body’s Venue Management System (VMS) and was hailed for its flexibility during Covid-19 – with golfers able to use the app on their phones to book tee times and pay entry fees without having to go near a touchscreen or the pro shop.

They could also enter scores, verify them hole-by-hole with a playing partner and then virtually sign them before a digital copy was saved in the cloud as a PDF.

Clubs who use at least one VMS module have now been told, in another Scottish Golf FAQ, that “in reviewing the market, DotGolf demonstrated software to us that delivered on golf clubs’ needs and responded to their feedback.

“DotGolf’s software is significantly easier to use and offers additional functions that golf clubs have been requesting for some time, including accounting software, more appealing websites, and better user experience.”

Clubs that don’t use VMS have been told that their software companies have been made aware of the change “and have been given instructions on how to point to the new platform”.

Were you planning to post a score during the WHS freeze? How will this affect you and were you an avid user of the Scottish Golf app? Tweet me and let me know your thoughts.

What do you think about the World Handicap System? Has it settled in yet or does it leave you feeling frustrated? Let me know how you feel with a tweet.