We’re heading south to Mississippi this week for the Sanderson Farms Championship on the PGA Tour. This prestigious event in the golfing calendar started in 1968 and has taken place at the Country Club of Jackson every year since 2014. Sam Burns will be looking to use the momentum gained from the USA’s impressive win at the Presidents Cup as he looks to defend his title here at CCoJ. But first…

Course summary: A flat parkland course that shouldn’t give the players too many headaches. Bunkers and water hazards are the course’s main defence, protecting wider than average fairways and Bermuda greens. As a relatively long track, driving distance will be important for players in order to set up an ideal approach shot. 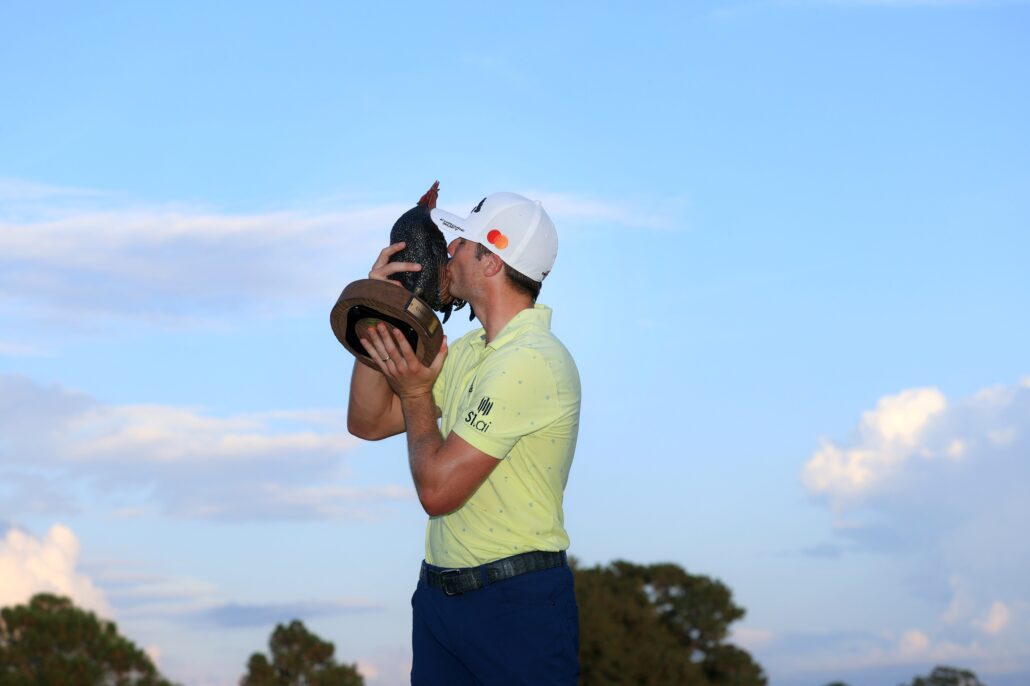 I don’t love this event from a value perspective, and many may cringe at 25-1 on JT Poston, but in the context of the rest of the field, it makes perfect sense.

Poston finished 11th here in 2019, when he was leading after round 1 and was 2nd at the halfway stage and a year later, he bettered that, finishing 3rd, after leading at the 54-hole stage.

Now he comes into this event this time as a two-time winner, as he won again at the John Deere Classic back in July, and he’s hardy slowed down with four top-21 finishes in six starts since. Poston is one of the inform players in this event and one of the better players overall in general, so I think he is worthy of his 25-1 odds, even if they look a hard pill to swallow right now.

Taylor Moore and Alex Smalley are two golfers I keep grouping together at the moment, and still expect to breakthrough this season but it is the former I am giving the edge to this week.

Moore has already played here twice, finishing 53rd when playing without status, and he was on track for a much better performance, sitting 16th after 54 holes. Fast forward to last year and he finished 17th at this golf course, shooting rounds of 66-67-68 either side of a 71 in round two which killed his chances of winning.

He opened his season at the Fortinet two weeks ago, finishing 36th but he was 5th at the halfway stage and that isn’t the first time he has put himself in with a chance.

Moore finished 6th at the Rocket Mortgage Classic and 5th at the Wyndham Championship, two Donald Ross courses that tend to provide some crossover in this event, and both should be considered as huge positives.

Next up is Hojgaard’s compatriot, Thorbjorn Olesen. Unlike Hojgaard, we know exactly what Olesen’s upside is on this course and that is a victory and a runner-up finish, so there’s already a lot to like.

Add in the fact that Olesen was 1st in SG Tee-to-Green and 7th in Approach last week, in what was his second top-10 approach week in four starts, there’s reason to believe Olesen can go on and win again in this event.

Like his fellow Dunhill Links winner, Hatton, Olesen has won six times on the DP World Tour and four have come in big events like this, the Italian Open, the Turkish Airlines Open and the British Masters. He comes to play when the stakes are high and this set of courses have been good to him in the past and should be again, when in this form.

Jimmy Walker recently posted on his Instagram being very bullish about his game, using many different words to suggest he still has something left to offer, and the stats at the Fortinet back that up.

He only finished 25th that week, but he led the field in birdies with 22, and just couldn’t keep the bogeys off his card to make those better holes count. He did however lead the field in SG Approach and also finished 4th in Tee-to-Green, which is huge for a guy who’s upside we know is winning, including a major.

There is no getting away from the fact he has struggled since winning that 2016 PGA Championship, but a lot of that has to do with his 2017 Lyme Disease diagnosis, but if he can string four rounds together here, which there has been signs he can, then he could be a big player, at huge odds on Sunday.

Walker was the first round leader here in 2020, opening with a 64 and just last year he sat 15th at the halfway stage. On both occasions he fell away to mid-40 finishes, but given his ball-striking last time out, and his clearly renewed sense of confidence, I think we could see a big comeback for the 2016 PGA Champion.

He has shown glimpses of his best over the past couple of years, and while he hasn’t been able to sustain it for long, I do think there is a chance Walker can get back to winning form if he can manage his illness and rededicate himself to the game.