Moving out of bounds and setting pins: the side of refereeing you don't see

Our expert donned his stopwatch once again as part of the refereeing team at the PGA Fourball Championship at Carden Park. But if you think being an official is just about giving rulings, you're in for a surprise

They don’t tell you this when you’re sitting the Rules of Golf exams. It doesn’t matter how hard I hit it; the boundary post won’t break the dry ground.

Fellow referee David Rishworth flashes me a somewhat piteous look, motions for the hammer, and with three firm strikes it is in position.

I clearly wasn’t built for manual labour. But I need to get used to it – because there’s half a dozen of these requiring planting along the side of the 13th fairway. And a player’s tournament may depend on it.

I’m at Carden Park, buggying around the Cheshire course, after being invited to join the refereeing team officiating at the PGA Fourball Championship.

This event is a big deal for club pros. The teams came through seven regional finals and 72 of them qualified for a 54-hole tournament over three days.

There’s decent money on the line too, with a total prize fund of £35,000. What they don’t need is one of their referees messing it up.

Luckily, I am in great hands. Chris Joyce, the PGA’s head of tournament operations, is hugely experienced and Rishworth, with whom I worked at Regional Open Qualifying earlier in the summer at Alwoodley, has carried his rule book around the Open and the PGA Championship.

Tournament director Chris Myatt breezed through his Rules of Golf Level 3 exam at the same time as me at Formby Hall, so I hope there’s enough expertise on hand to keep me on the straight and narrow.

I spent two days at Carden Park, the first for golf course set up and the second as an on-course referee. Here’s a little run down of what happens… 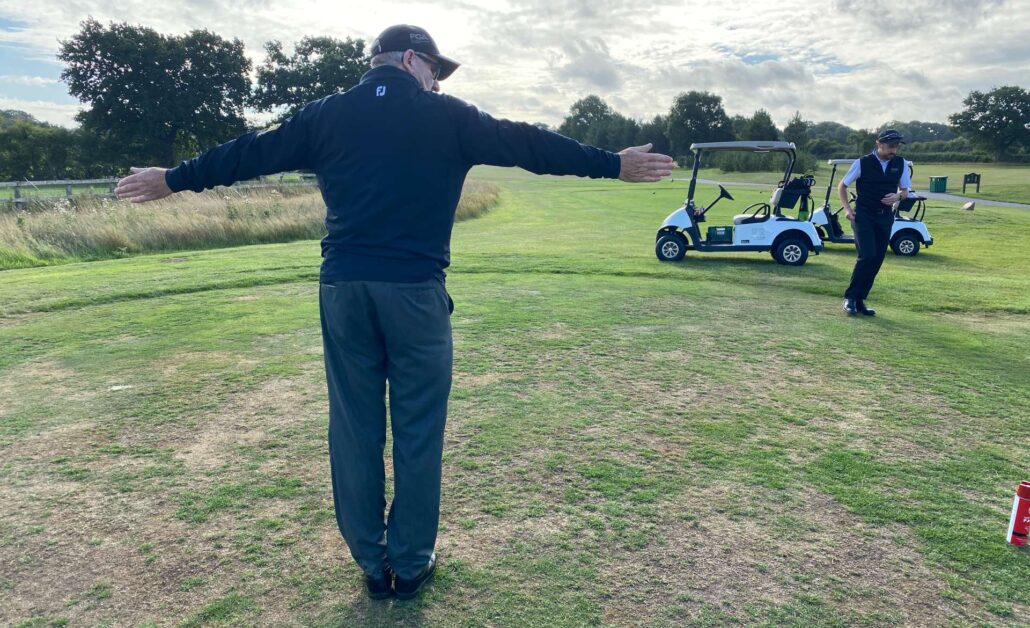 I thought I’d seen what a course walk entailed, but this is on another level. As I arrive at the 2nd green, Chris Joyce and David are rolling balls on the putting surface to test the slope on a possible pin position for day one.

Chris has got a nifty app on his phone and, when he places it on the putting surface, it measures the degree of lean on the green. The sweet spot is around two degrees. Anything substantially over three is bad. They won’t set the flags for day two and three until later but, even at this stage, their eyes are scouting around for where they might go.

They are looking at front, middle, and back flags as well as a balance of sites on the left and right of greens. They’ll tuck some pins away behind bunkers, or in front spots, but always trying to ensure it’s a fair test.

This is a process they repeat for each hole and there’s a similar task required on every tee.

For this, Chris pulls out another ingenious gadget – two pieces of waste pipe that are wedged together to form a T-shape.

He and David place this in the centre of the tee, open their arms wide and visually check that it’s pointing down the line of play to the middle of the fairway. From there, they can set the tee markers for the hole – making sure they’re not wonky or unnecessarily pointing players towards doom.

It also serves another purpose. From that point in the middle of the fairway, they can move from there to the green.

Finding the central part of the putting surface, they spray paint another small T-shape and use it to measure out their pin positions.

I’ve been a passenger up to this point but now it’s time to get a bit more involved.

On several holes on the front nine there are drainage lines that criss-cross the fairway.

They’re plentiful enough that it’s almost certain they’re going to collect some balls and we’ll need to give relief.

But we opt to allow stance relief too – something that’s usually restricted by Local Rule on the PGA Hard Card – because the seams in the turf are wide enough that they’re likely to affect the footing of anyone who finds themselves standing on one of them.

Then we start setting boundaries, removing the out of bounds that would normally be in play left of the 6th hole, and establishing where the limits of the course will run down the 9th and 18th as it interacts with a car park and the clubhouse.

This is where the hammering starts. But there are also penalty areas to check, and paint, bushes to assess, and drop zones to allocate. By the time we’re done, it’s taken the best part of seven hours.

And then there are the things for which you just can’t plan. After setting up the practice day tee markers for a female competitor, a visitor – playing the course after we’ve been round – decides she doesn’t like where the forward tees are now positioned. So she moves them!

There’s nothing stranger than golfers. 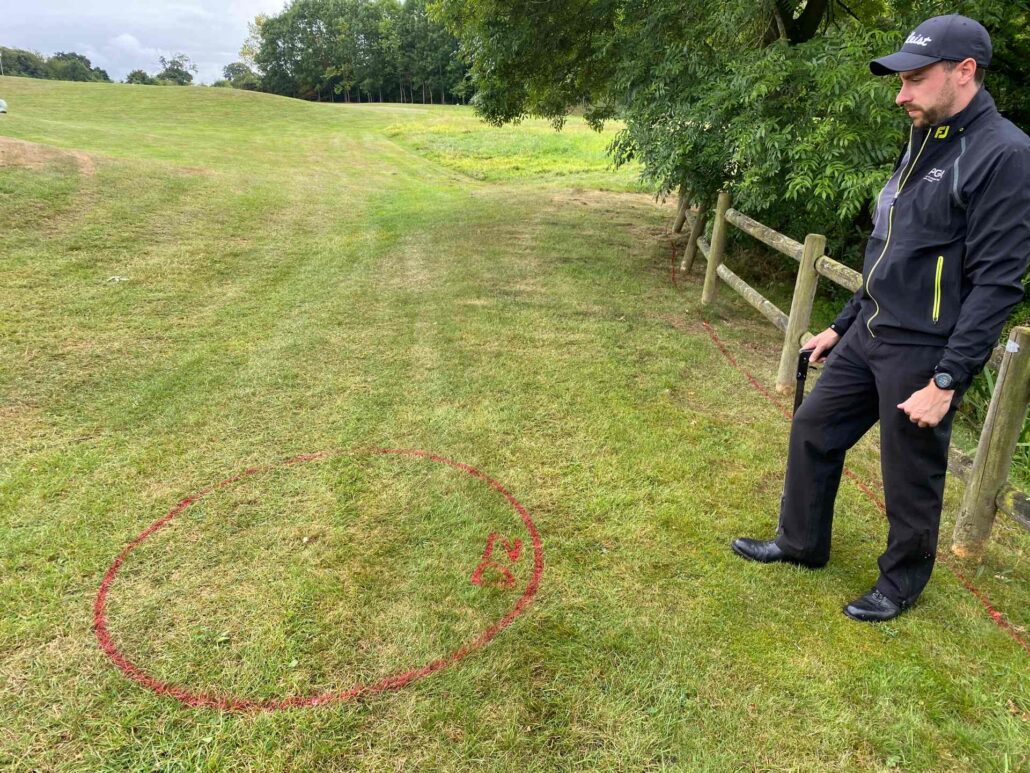 The drama starts early and it’s got nothing to do with birdies or bogeys. Before a shot is hit, an outbreak of disease is reported on the 18th green. The pin location is safe for the opening day but there are another two to get through and it may limit where the team can place them in subsequent rounds.

Chris Joyce is already out on the course, ahead of the players and setting the day’s tee markers.

He’s ensuring they follow the line of play and then checking the pin positions are where they are supposed to be.

Then he works out the new ones for day two. This is not a quick process. As with the first day, it takes hours. What is the weather doing? Has the wind changed? Is bad weather expected? It can alter all of his calculations.

I’ve re-routed to the 4th hole, where those drainage lines we identified during the course walk appear for the first time.

Our caution is justified from the first group. The balls find the cracks as if they’re drawn in by a magnet.

I’ve read the Local Rule, I know Rule 16 pretty much off by heart anyway, so when the first player motions me over I’m prepared.

By the 20th, though, I’ve got the interaction drilled down to an art. I’ve already identified from the tee shots which players may need assistance – remember they have to option to play it as it lies from ground under repair – and it takes seconds to sort it out.

That’s what the players want. They don’t need chapter and verse. They need, ‘can I take relief, and how do I do it?’

From there, it’s relatively straightforward. Two players request relief from an artificial path – the second of whom decides to play it as it lies after we work out the nearest point of complete relief is in some thick stuff right next to a tree.

Mainly, it’s watching out for pace of play and helping Chris and Dave if they need any timings on various groups.

It’s a long day on course. From 6.30am until 7pm, when I pull out of the car park. And there’s still two more days to go for the rest of the team.

But it remains a great thrill to use the Rules of Golf knowledge I’ve gained to help, and I hope I get the chance to get the book out again very soon.