Want to concede a putt? Here's how to do it without breaking the rules

‘That’s good!’ Easy isn’t it? So why can concessions in golf become so complicated? Our Rules of Golf expert is on hand to keep you out of controversy

The concession. A golf course was built around one – one of the most famous moments in golf history when Jack Nicklaus conceded Tony Jacklin’s short putt at the final hole of the Ryder Cup at Royal Birkdale in 1969.

But this simple act has also sparked huge controversy. Just think about Suzann Pettersen, Alison Lee, and the concession that wasn’t at the Solheim Cup in 2015.

They can also have a huge impact in our own club match play games too. Will you give it or won’t you? It all adds to the strategy and gamesmanship of a good head-to-head battle.

Given how central they are to the match play experience, you won’t be surprised to learn to know that a whole subsection of Rule 3 – Rule 3.2b no less – is given over to this potentially thorny subject.

But do you know what it says? I am about to reveal all… 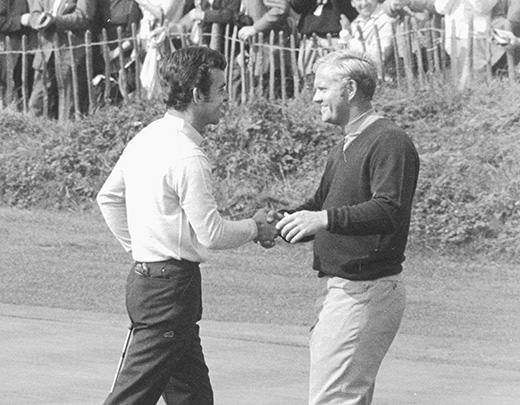 When can you concede a putt?

Let’s take each in turn then. When you concede the next stroke, it can be done at any time before your opponent’s next stroke is made. Rule 3.2b says the opponent has then completed the hole with a score that “includes that conceded stroke” and anyone can then remove the ball.

If your opponent’s ball is in motion and a concession is made, it apples to their next stroke, unless the ball is holed (in which case, the rule says, the concession doesn’t matter!)

You can also deflect or stop a ball in motion to concede the next stroke, but that’s allowed only if it’s done specifically in that context and if there’s no “reasonable” chance that the ball can be holed.

Moving on, you can concede a hole at any time before it is completed. That includes, Rule 3.2b reveals, before the players even start the hole.

It’s a similar state of affairs when you’re conceding a match. You can do it anytime before the result is decided and before the match even kicks off.

But, circling back to conceding holes, you are not allowed to do that to deliberately shorten a match. An interpretation to Rule 3.2b says if the participants know they are breaching this rule and start the match without cancelling the agreement, both players get disqualified under Rule 1.3b. The match stands as played if it’s done out of ignorance.

Who is allowed to make a concession?

You. If you’ve got a caddie, an interpretation to Rule 3.2b (2), says they can’t concede a stroke, hole, or match, to an opponent. If they do so, the concession is not valid.

You won’t get a penalty if your bag carrier takes this action, unless they then go on to lift the opponent’s ball or ball marker or yours if that breaches Rule 9.4 or 9.5.

What if your opponent picks up their ball or marker, thinking they’ve had a valid concession from a caddie? Never fear, it’s classed as a reasonable misunderstanding – we’ll get on to this in just a second – and the ball or marker is replaced. Unless, of course, the player then makes the concession instead!

How are concessions made?

Right, onto brass tacks. How is a concession done which satisfies the Rules of Golf? It is made “only when clearly communicated”.

It’s either verbally or “by an action that clearly shows that the player’s intent to concede the stroke, the hole, or the match”. A gesture is an example.

So what happens if things go wrong? An opponent, for example, lifts their ball – breaching a rule – because they thought you were conceding the hole to them?

If that’s done on a reasonable misunderstanding that your statement, or action, was a concession of the next stroke/hole/match then a penalty won’t apply. They’d simply replace the ball on its original spot, or estimate if that wasn’t known.

Can I turn down a concession?

Thanks, but no thanks? I’m afraid not. Concessions are final and not only can they not be declined, they can’t be withdrawn either.

LPGA star ends round putting with wedge after 'freak accident'