It’s been the off course rivalry which has made Brooks Koepka vs Bryson DeChambeau look like child’s play. And now, after months of feuding, Rory McIlroy has exposed the exact moment his beef with Greg Norman began.

In the latest shock admission from McIlroy – who has continued to be at hammer and tongs with Norman during the PGA Tour’s war with LIV Golf – the World No 1 has revealed his rift with the breakaway league’s CEO dates all the way back to 2020.

In an incident which left him wanting “to be as much of a pain in [Norman’s] arse as possible”, here’s how McIlroy explained the bad blood started when speaking to the Sunday Independent’s Paul Kimmage.

“So this goes back to some comments I made in 2020 when I was asked about the PGL [another breakaway tour] and the conflict that was brewing,” McIlroy revealed. “I said, ‘I want to be on the right side of history with this one, the way Arnold [Palmer] was in the ‘90s with the whole Greg Norman thing.’

“I didn’t say anything derogatory about Greg at all, just ‘this happened in ’94 and Arnold Palmer stood up for the rest of the membership’. Anyway, he wasn’t happy, and we had a pretty testy back-and-forth and he was very condescending – ‘Maybe one day you’ll understand’ – and all this s***e.”

But Norman’s zesty comments were only the beginning of the turmoil. According to McIlroy, he would initially make amends with Norman shortly after, only to then be labelled as “brainwashed” by his rival. 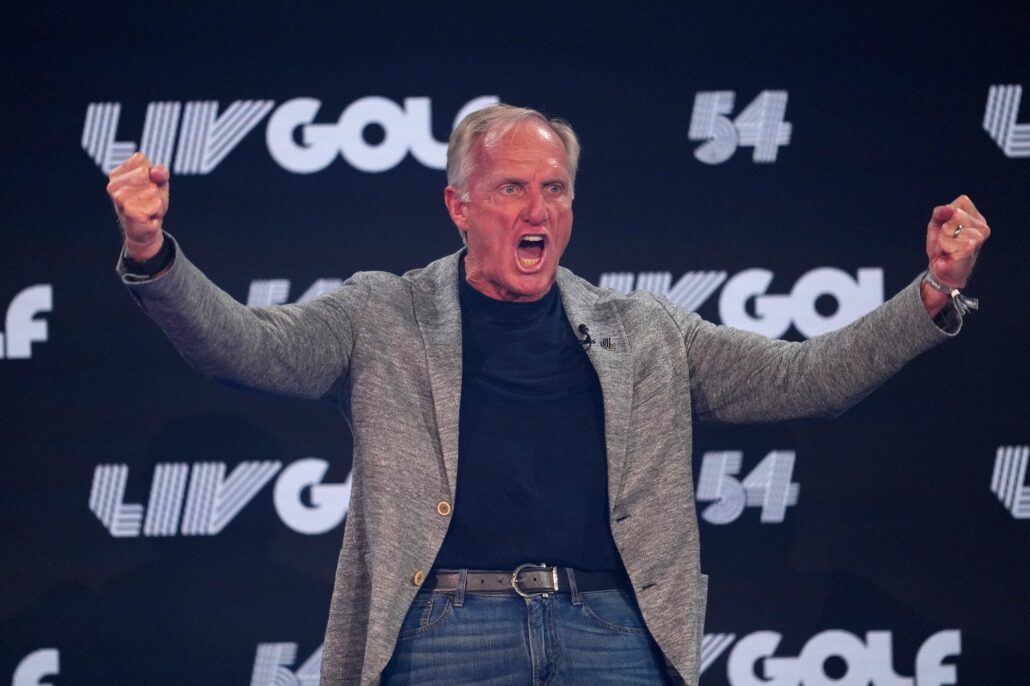 “Fast-forward to this year and a week after Augusta there’s a documentary about him on ESPN, Shark, about his loss in ’96″, the Northern Irishman continued. “So I watched it and was really moved and thought, ‘You know what? I’m going to send him a message.’

“So I did: ‘Greg, I just watched your documentary on ESPN. I thought it was fantastic. It must have been very tough to do that. Hopefully it reminds everyone of what a great golfer you were.’ There was another thing. When I lost or had my meltdown at Augusta in 2011, Greg had sent a lovely message and been really helpful to me.

“So I said to him, ‘Watching it reminded me of how you reached out to me in 2011, and I just want to say that I’ll always appreciate it. It meant a lot. I know our opinion on the game of golf right now is very different, but I just wanted you to know that and wish you all the best.’

“He came back to me straight away: ‘I really think golf can be a force for good around the world. Great to see you playing so well. I know our opinions are not aligned but I’m just trying to create more opportunities for every golfer around the world.’ Fine. Really nice.

“Then, a couple of weeks later, he does an interview with The Washington Post and says I’ve been “brainwashed by the PGA Tour”. I’m like, ‘For f**k’s sake!’ We’ve had this really nice back and forth and he says that about me. I thought, ‘You know what? I’m going to make it my business now to be as much of a pain in his arse as possible.’”

The latest revelation comes just days after Tiger Woods called for Norman to removed as LIV Golf CEO. Since then, the Aussie has been backed by Sergio Garcia, before telling Today’s Golfer he pays “zero attention” to what both Woods and McIlroy have to say.

We’ll let you decide who’s truly “brainwashed” as LIV get prepped for a revamped 2023 season.