The man who tamed Tiger

When it comes to beating a prime Tiger Woods down the stretch in a major, Rich Beem has been there and done that. He just hasn't got the t-shirt. (Yet.) Keith Jackson sat down with the 2002 PGA champion

Two things: Rich Beem would not walk into a room and announce himself as a major champion. Nor would he wear a shirt with ‘I beat Tiger’ printed on the front – although that would be “kinda funny once in a while”.

Some would excuse him for wavering on either of these, but it is clear that he will always retain the sense of fun, and humility, that have made him so popular and endearing, both as a player and a broadcaster.

Ahead of what will “probably” be his final playing appearance in the PGA Championship at Southern Hills, the memories of his major breakthrough 20 years ago are still clear and vivid.

Beem can even recall his Tuesday practice round at Hazeltine – although who would forget playing in a fiveball with John Daly, Fuzzy Zoeller, Robert Gamez and Pat Perez?

But just as easy to recall was his time as the club pro at El Paso Country Club in 1998, when success was winning $100 in a Friday match to ensure a weekend of nice dinners and cold beer.

And then, in his sensational August of 2002, Beem went to his bank to pay close to $2 million into his account.

“I still have the deposit slip in my house somewhere,” says Beem, who snatched a one-point victory over Steve Lowery at The International, enjoyed a week off, and then stunned Hazeltine by holding off a rampaging Tiger Woods to etch his name onto the Wanamaker Trophy.

There are only a handful of golfers who can say they’ve taken on the Big Cat in his prime, at the business end of a major, and come out on top. Yet Beem, now 51 and an established part of the Sky Sports Golf commentary team for the past few years, has always been keen to play down such an achievement.

“I’m aware that some folks make a big deal out of it, and that’s fine by me, but I was never really thinking about Tiger in that final round,” he explains, recalling that he began his Sunday three shots behind overnight-leader Justin Leonard, whose 69 in howling winds on day three was one of the rounds of the year – small consolation for his closing 77.

“I do remember walking by Tiger on the practice range pre-round and I said: ‘Hey Tiger, good luck today, play well.’ He didn’t really say anything back! It wasn’t because it was Tiger, that was just me being me, I’d have said the same to anyone. At that time, Tiger was World No 1 and it wasn’t really close, and he might have been thinking, ‘What in the hell is this guy thinking, or saying, or doing?’

“I just thought it was funny and laughed it off, and when I look back on that final day, I think of it as me beating Justin Leonard rather than Woods. I was playing with him in the last pairing, so he was the man I needed to beat that day. Finishing on top of the leaderboard was all that mattered, who finished second was not that big a deal to me. I just don’t reflect on it as me beating Tiger.

“A lot of other people make more of it than I do.”

There was plenty for Beem to think about, and avoid thinking about, on that final day: Nervous from the off, not being distracted by the travails of his playing partner, and just how big his lead was with five holes to play – something he was working out just as Woods was about to finish with four consecutive birdies to pile on the pressure down a fearsome closing stretch. 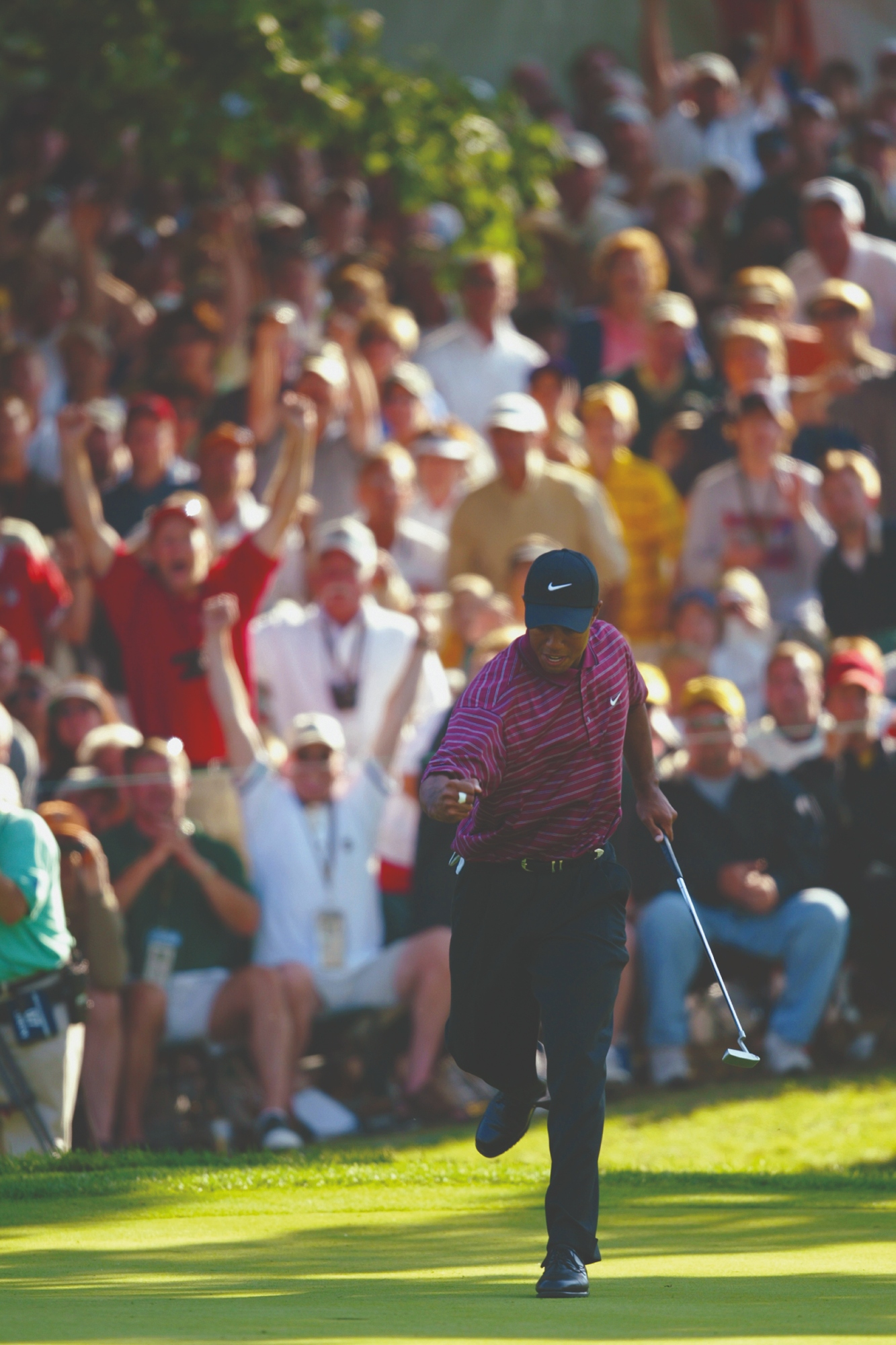 Many would, and have, buckled under that pressure. Beem’s response, however, was to follow an eagle at 11 with a birdie at 13 before he made a mockery of the difficult 16th, where he rolled in a 40-footer for birdie to give himself some welcome breathing space.

“When I made birdie on 13 there was a huge leaderboard right in my eyeline, I just couldn’t miss it. It wasn’t fully up to date, so when I strolled to the 14th tee I actually thought I had a six-stroke lead with five holes to play. That’s when it suddenly hit me, the thought that the only guy out there who could screw things up was myself.

“That 75-yard walk from green to tee helped me out quite a bit. Yes, I was nervous throughout the final round, as I had been for most of Saturday, but it didn’t feel overwhelming until I got to the 18th, when I’ll admit that every fibre in my body seemed to be shaking.

“On 16, nobody in the field, not even Tiger, felt comfortable with the tee shot – especially when the wind was howling on Saturday.

“Thankfully, it was much calmer on the final day, I had the honour, pulled out the seven-wood I had used on that tee all week, put the tee in the ground and hit as fast as I could. I had urged myself to make my best swing of the day right there, and that’s pretty much how it turned out.

“I didn’t want to stand there looking at it, have a conversation or two with my caddie and allow any negative thoughts to creep in, I knew what was needed – a good solid seven-wood down the left side with a hint of cut, and I pulled it off. That was probably the toughest shot I faced coming down the stretch, and it wasn’t one to over-analyse before pulling the trigger.” 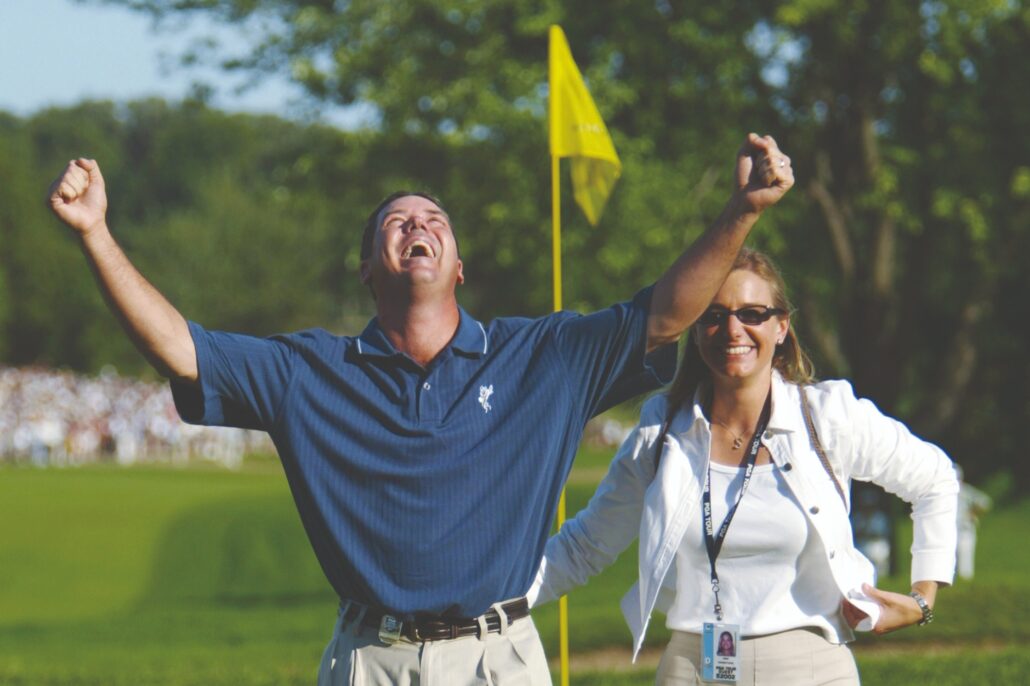 The highlight reels that evening affirmed Beem’s effortless charisma, his bravado on the big stage, and his impromptu victory jig on the 72nd green once he had sealed the deal.

“I’ve no idea what that was about. I just think it was more relief than anything else, having played with a lot of nerves going on throughout most of the weekend, even though I was playing really well. Playing with the lead, or near the lead, for most of Saturday and Sunday will wear anybody out.”

And he also had his caddie, Bill Heim, to thank for some priceless advice on the 18th tee.

“Bill never pulled the driver out of the bag before I asked for it, yet he already had the headcover off before telling me to ‘just hit this thing as hard as you can’. You got it, Bill.

“The more nervous I got, Bill knew I would hit it longer and straighter, and it was the same deal as the tee shot on 16 – just get up there and let it fly. And I crushed it, one of the longest drives of the day on the 18th hole, and that was a great feeling to catch one that good with so much on the line.”

What was in Rich Beem’s 2002 PGA Championship winning bag? 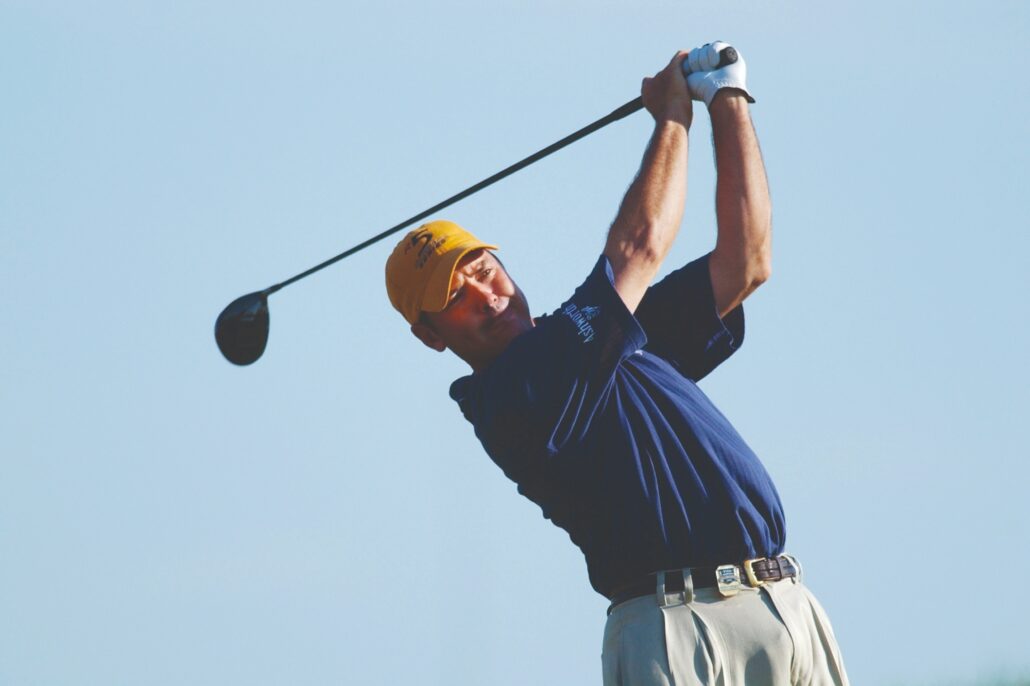 To this day, Beem insists his magic moment “does not consume me on a daily basis”, although he is also aware of how seismic his achievement was. And it was the silverware, not the money, that was, and still is, the focus – although the extra cash did help!

“I’m obviously very proud to call myself a PGA champion, and if someone asks me about it, I’m happy to talk. But I’m not the guy to wear a T-shirt with ‘Hey – I beat Tiger’ printed on it, although that would be kinda funny once in a while! But the more I look back on 2002 and reflect on it – yeah, it’s awfully cool.
But it was a moment in time and I can promise you it does not consume me on a daily basis.

“It goes without saying the money was fantastic, but I was also super-pumped to have won The International, and then my first major.

“Having those kinds of numbers in my bank account was life-changing, even though I had a pretty comfortable life before that, and there’s no doubt the money helps. But these days, I don’t wake up and wish I could play and compete for that kind of cash again, I wish I could hit the golf ball that well again.

“If I’m honest, winning that amount of money maybe did take the edge off my will to win. Of course I wanted to win every time I teed it up, but I didn’t feel pressured to play fantastic golf each and every week.

“It was a far cry from when I worked as the club pro at El Paso, needing to play well in the Friday match to make sure I had enough beer and dinner money to see me through the weekend. So in some respects, winning $100 in 1998 was just as valuable to me as it was banking $990,000 for winning the PGA Championship four years later.” 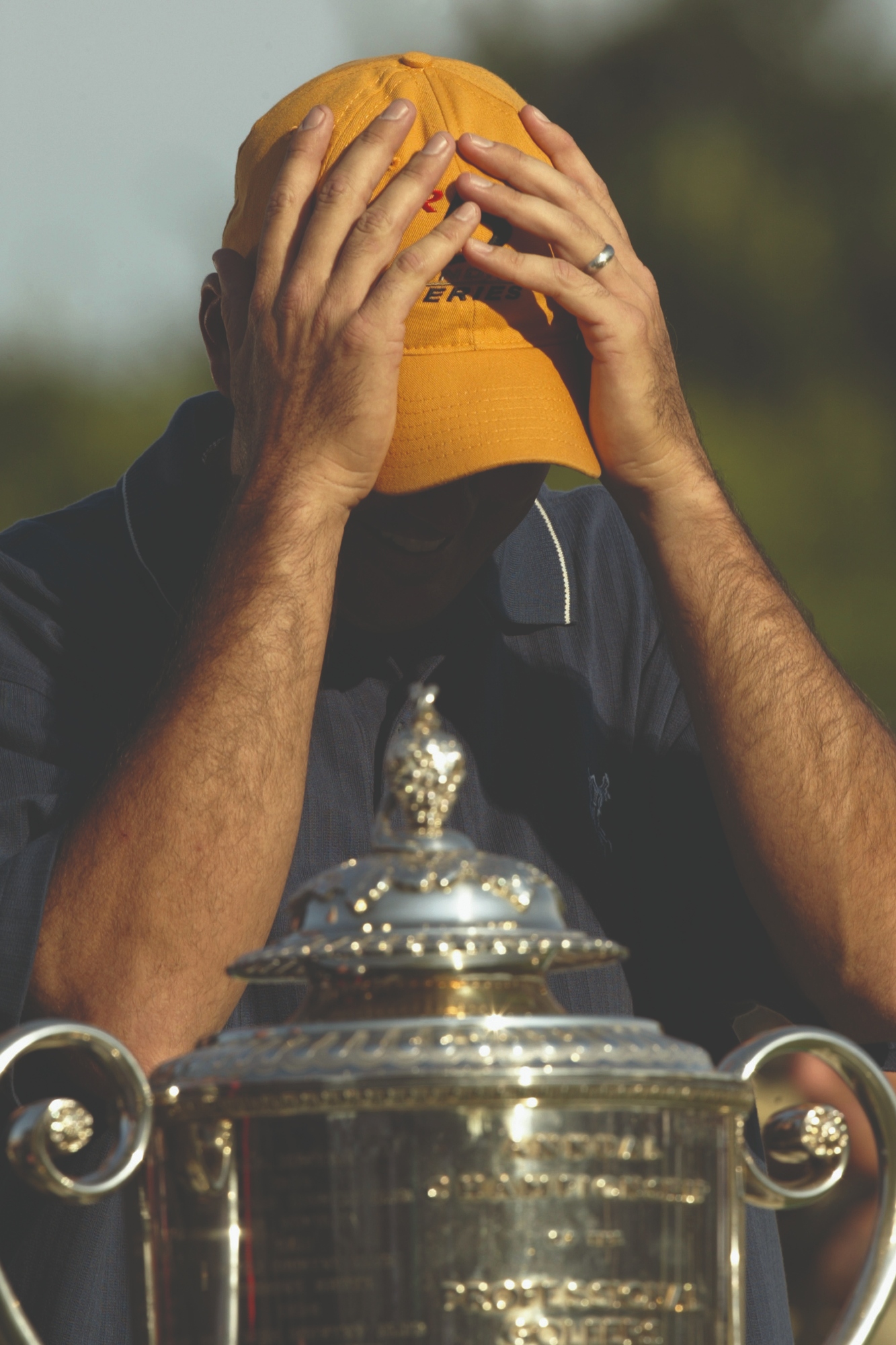 Beem has missed the PGA Championship only once – in 2010 – since winning in his second appearance, but his 20th anniversary gig at Southern Hills is also likely to be his curtain call.

“The golf courses are getting longer and longer, and the tournament heads to Oak Hill near New York next year so it’ll be cooler and play even longer.

“Going out there against these guys and having to smash driver, four-iron when they’re are hitting driver, nine-iron, that’s not a lot of fun.”

And that’s an understandable footnote, from one of the most entertaining and “fun” major champions of the last 20 years.

Now, about those dance moves Beemer… 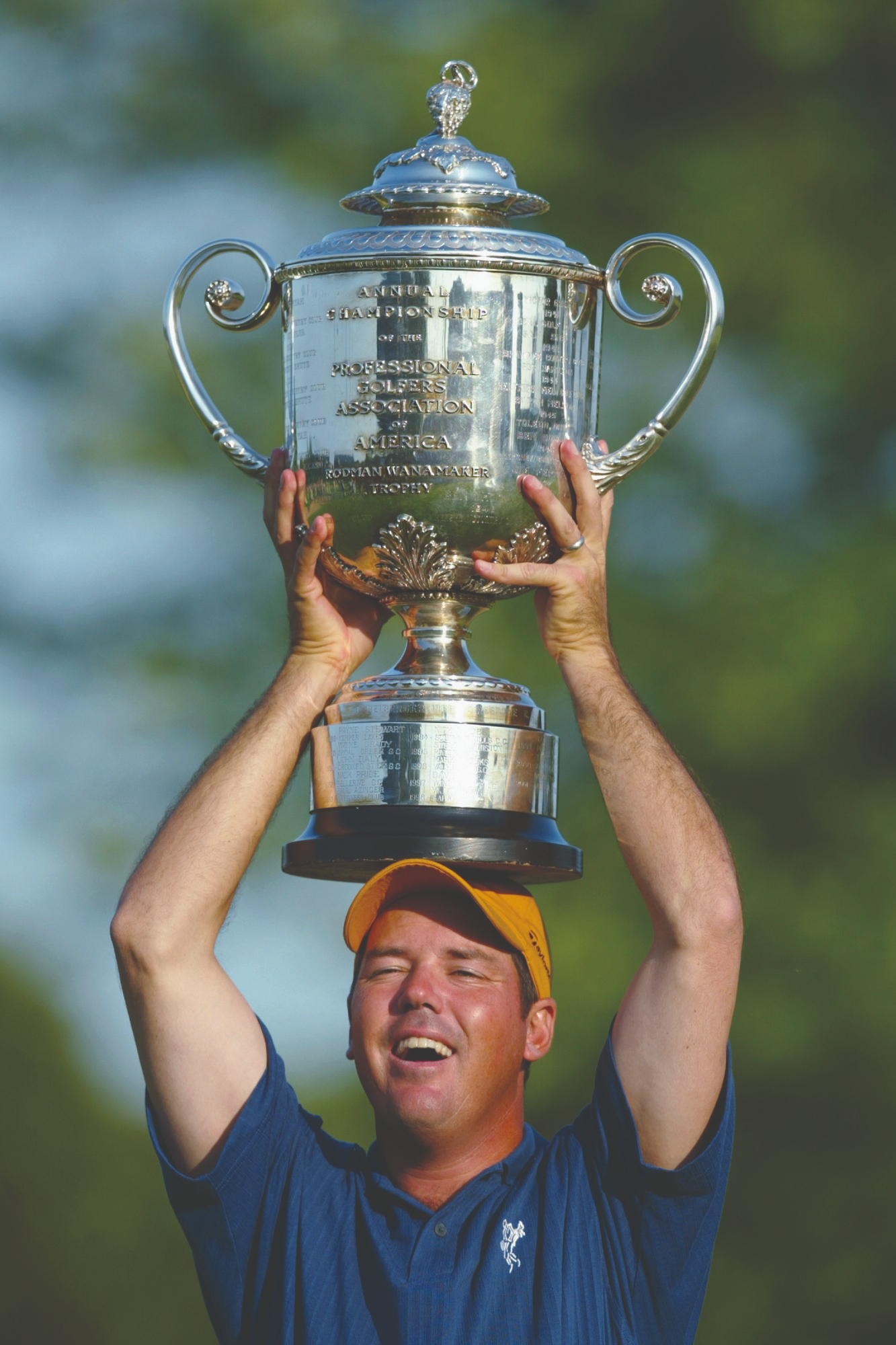 In his post-tournament press conference, runner-up Tiger Woods explained how his game plan to overcome the leaders didn’t quite come off.

Woods started the day tied for fourth at four-under, with Fred Funk a shot ahead, Rich Beem two ahead, and Justin Leonard leading the way at nine-under.

“Before the round even started, if I could have just chipped away and got it to two or three going into the back nine, I would have had a very good chance of winning the tournament,” the World No 1 explained.

“So to be only one back was an added bonus.”

With Funk and Leonard fading, it became a two-horse race. Beem eagled the 11th to pull three clear and held his nerve down the stretch.

“I knew if I just played the back nine in two- or three-under par, I probably would win the tournament,” Woods added. “I did, and didn’t win.

“Rich played well. He has been playing well, and he just got up there, he trusted his game, believed in himself, and he hit some good shots coming in.

“He just went out there and played great and shot four-under.

“That’s awfully impressive to go out and shoot a round like that when he absolutely has to do it.

“Sometimes it might be a benefit to be a little naive in a situation because you’ve never been there before in a major championship. He won a tournament a few weeks ago, but never been in contention in a major.

“I gave it absolutely everything I have. You know that’s the way I play each and every time I tee it up, and this was no exception.

“I made a few mistakes, and I came right back and sucked it up and got the job done coming in.”

When asked if he had ever played with Beem before, Woods said he hadn’t, adding: “I’ve seen him on the range. I’ve seen him in the locker room a ton of times. He’s very happy-go-lucky, that’s probably the best way to describe him. He loves laughing, joking, having a good time.”