The downfall is complete – but do you feel sorry for Mickelson?

Phil Mickelson has been a shell of his former self this year for a variety of reasons, but can you sympathise with the six-time major champion? Steve Carroll and Alex Perry weigh in

Phil Mickelson is having a torrid time of it this year.

Off the course, controversial interviews led to Lefty taking a hiatus from the game that saw him miss the Masters for the first time in more than quarter of a century as well as the defence of his history-making PGA Championship title.

On it, he returned at Centurion for Greg Norman’s LIV revolution before missing the cut by miles in his latest Grand Slam bid at the US Open.

So the question is: do you feel sorry for him? Two of our writers have their say…

‘Has anyone fallen from such a lofty perch as quickly as Phil Mickelson?’

If this is the last we see of Phil at his national Open – assuming USGA chief Mike Whan’s words are not merely that – then it’s a genuinely sad end, writes Steve Carroll.

There’s no schadenfreude here. I take no delight in watching one of the greatest players golf has ever seen slap it round Brookline in double digits over par.

Yes, he’s made his bed – both in his outrageous comments earlier in the year and then in his equally as dramatic decision to jump right in with the LIV Golf series.

He’ll have to take the consequences, and they will surely become apparent as more governing bodies and tournament organisers eventually announce whether they’ll follow the route taken by the PGA Tour.

Who could have thought we’d see anything like this when Lefty was so triumphant in last year’s PGA Championship? The oldest player ever to win one of the big four, no less.

Those of us who enjoy watching him play – and I count myself among that number – were looking forward to many more years of Mickelson at the majors.

Has anyone fallen from such a lofty perch so quickly? He has looked lost, agitated, bereft. You can add your own adjectives. I don’t have to agree with his decision, but neither do I wish misery upon him for the path he’s chosen. I just think golf as a whole would be the poorer for his absence.

‘He had the world at his feet – and he blew it’ 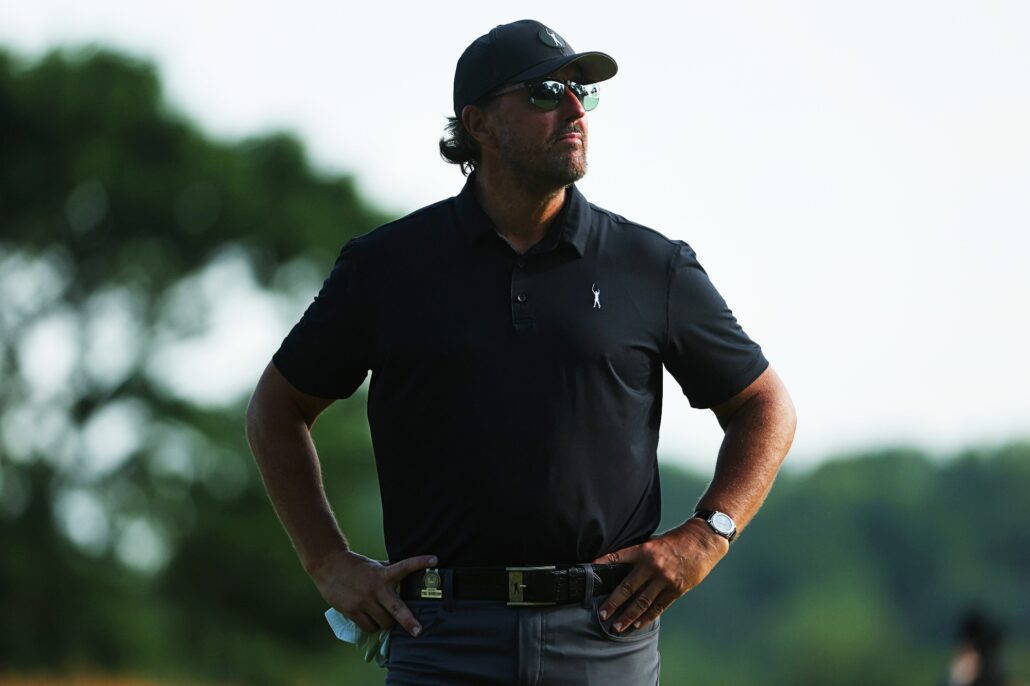 Of course I feel sorry for Phil, writes Alex Perry.

As a human, I’m empathetic. We all have our demons, and Mickelson has spoken openly about them. I sincerely hope he finds the strength to overcome them.

But do I feel sorry for him as a golfer? Absolutely not.

Mickelson had the world at his feet this time last year. He had just done something no other golfer had in 161 years of major championship golf.

Becoming the first player to lift one of the big four after his 50th birthday should have been Phil’s ticket to golf immortality. He should have been sailing off into the arms of the golfing gods, a true legend who not only transcended generations but inspired them too.

He’ll never be talked of in GOAT terms – Tiger and Jack have that sealed forever – but he would at least be invited to the party.

Instead, he decided to take the dirty cash and play a heavy role in fracturing this beautiful sport at the highest level.

Seeing him cut a lonely figure as he hoiked around Brookline, keeping up appearances with that familiar left thumb permanently in the air, brought me no joy. But it also brought me no sadness.

Mickelson made his bed, and now he has to lie in it. At least it’s stuffed with $100 bills…

Where do you sit on the Phil Mickelson debate? Get in touch, or you can tweet us.