The Rules of Golf allow the removal of loose impediments, but that doesn’t mean you should always do so with abandon, as our expert explains

You all saw Scottie Scheffler’s recent rules drama at the Masters. In between all that palaver with the unplayable ball, one other notable thing stood out. Did you see how cautious he was when picking up pine needles as he prepared to take relief?

It’s a reminder that you’ve sometimes got to have your wits about you, and make sure you’re aware of more than just the obvious, when it comes to the Rules of Golf.

We’ll get on to why Scheffler was so careful in a second but while we’re on the subject of loose impediments, let’s have a little catch up on what they are and how you should proceed when you encounter them on the course.

What are loose impediments?

Quite a lot of things. But the important point to note is that they are any unattached natural object. Stones, loose grass, leaves, branches, sticks, animal waste, dead animals – the list goes on and many are neatly summed up in the definition of loose impediment.

That also reveals what aren’t loose impediments and that can be just as important when you looking to deal with an object out on the course. They aren’t if they are attached or growing, solidly stuck in the ground, or sticking to the ball.

Snow and natural ice? Take your pick – these can be either loose impediments or temporary water when on the ground. The choice is yours.

And, of course, as Scheffler knew on Augusta’s 18th hole, pine needles are loose impediments too.

Can I remove loose impediments?

You know this bit already. Yes, you can, and Rule 15.1a says that, without penalty, you can remove a loose impediment “anywhere on or off the course and may do so in any way (such as by using a hand or foot or a club or other equipment)”.

There are a couple. If you remove a loose impediment and the ball moves, and it was at rest anywhere apart from the teeing area or the putting green, Rule 15.1b says you’ll usually add on a penalty stroke under Rule 9.4 and you must replace it on its original spot (estimate if you don’t know).

Moving back to Rule 15.1a, there are also two exceptions. One is when you’re deliberately removing a loose impediment that would affect a ball in motion. Don’t do that, the general penalty – two strokes or loss of hole in match play – is all you’ll receive.

The other is when you do it where a ball must be replaced. Before replacing a ball that was lifted or moved from anywhere except the green, you “must not deliberately remove a loose impediment that, if moved when the ball was at rest, would have been likely to have caused the ball to move”. However, if your ball moved while removing loose impediments during a search, they do not have to be replaced – but don’t forget to replace the ball.

You’ll pick up a penalty shot for your troubles if you do, but you won’t need to put back the loose impediment. 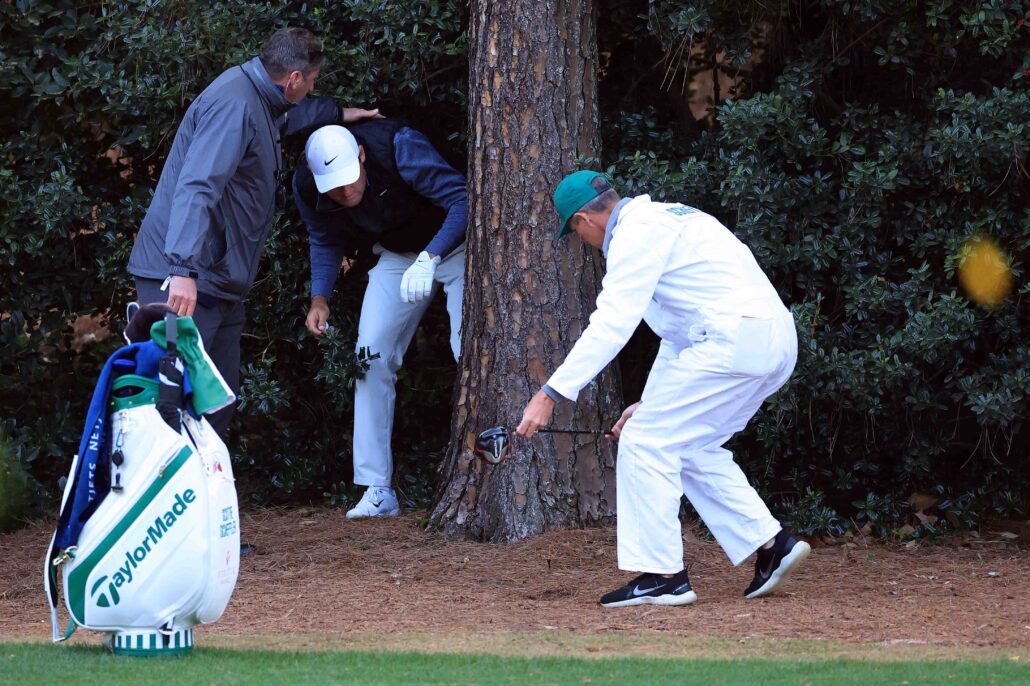 The Masters champ removed loose impediments from the area in which he wanted to drop and an interpretation to Rule 15.1a says it’s all fine and above board.

It states that when a ball is to be dropped or placed, and isn’t being put back in a specific spot that removing loose impediments before dropping or placing a ball is allowed.

What about conditions affecting the stroke?

So here’s where you need to be a bit careful. Rule 15.1a might say you can remove loose impediments in any way.

But if you start removing other things, along with those loose impediments, and these improve the conditions affecting the stroke, you could be going down a slippery stroke.

Rule 8.1b says you can take “reasonable actions” to remove loose impediments – even if they do improve those conditions.

The key, here, is reasonable, and here’s where Scheffler’s excursion in the pine needles is particularly illustrative on how you can come unstuck if you’re not paying attention.

How would you remove the pine needles? Would you just drag them away, or would you lift them individually as Scheffler did?

Carrying out the task the latter way will keep you out of trouble. The former, even though you think you’re adhering to Rule 15.1a, can bring danger.

You’ve got to consider the environment around you as well as the loose impediments.

If you simply start sweeping away the pine needles, you’re likely to move some loose soil along with it. And, remember, sand and loose soil are not loose impediments.

Rule 8.1a tells you that you must not ‘remove or press down sand or loose soil’ if these improve the conditions affecting the stroke. If you do, it’s the general penalty – though you are allowed to do it on the putting green.

So next time you’re removing loose impediments, think not just only about what you are picking up or shifting, but what is around or underneath them and how you are going to do it. You’ll ensure you don’t fall foul for the sake of a bit of carelessness.

LPGA star ends round putting with wedge after 'freak accident'

Can you use any part of the club to hit a ball?