Matt Cooper is in Mauritius for the Legends Tour season finale

There have been winds of change around Europe’s senior circuit for quite a while now and, as it prepares for the season-ending MCB Tour Championship – Mauritius at Constance Belle Mare Plage, the prospect is for more of the same in 2023.

Seven years ago what was once the European Senior Tour had descended to just 12 events on the schedule, down from a high of 22 in 2011.

By 2018 it had been re-branded the Staysure Tour, the first instance of a European Tour Group circuit taking sponsorship.

The entire 2020 season was cancelled due to Covid, a decision that provoked ire from many players but one which was understandable given that the tour’s members were quite literally the definition of one of the most-at-risk demographics.

That campaign should have been the debut of yet another rebranding exercise – the launch of the Legends Tour. Instead that was delayed until 2021.

It saw the operating of the tour taken in-house by Staysure and away from Wentworth. An alliance competition gave amateur golfers – albeit ones with deep pockets – the opportunity to play alongside the pros while a Celebrity Series added a dash of glamour.

As middle aged and old men are prone to, there was grumbling among the members by the season’s end. A lot of their golf was played in the presence of hackers (tournaments always feature pro-ams as well) and some carped that the celebrities, rather than the golfers, had become the stars of the show.

Ryan Howsom, owner of Staysure and the driving force behind the changes, argued that increased prize money and more attention in the long run would overcome the doubters.

And now, as 2022 has just a week of action remaining, further prospects of change have emerged.

In October James Corrigan of the Daily Telegraph reported that Trump Aberdeen is set to host the Scottish Senior Open. Given that the R&A has avoided Trump Turnberry and the PGA Tour steered conspicuously away from Trump courses, it is an undeniably newsworthy story.

As things stand there is no official confirmation of the story but new events and new venues are set to be announced next week.

Trump is not the only shadow cast over golf, of course. There is also LIV and one of its stars Lee Westwood told Corrigan that he had been approached by the Legends Tour about his availability when he turns 50 in April.

“The main Tour is trying to ban me,” Westwood said, “their seniors tour is saying they’ll roll out the red carpet. It sums up the mess. I’m not sure they know what their plan is with all of this.”

The official Legends Tour line, confirmed this week, is that as things currently stand Westwood can play on the DP World Tour therefore he is eligible for the seniors too when he comes of age. Should the former change, the latter would too.

It was smart politics from Westwood. Wentworth and the Legends Tour are connected but separate, a curious relationship with no precedent and blurred lines (at least from the outside looking in). The gap in the middle of the two organisations has presented the Legends with an opportunity for their purposes and Westwood has run with it too for his.

What remains obvious is that Europe’s senior game struggles for attention. Celebrities haven’t made much impact on that problem; Trump and Westwood might.

The tour first visited Mauritius in 2009 and two years later that tournament became the end-of-season MCB Tour Championship. There have been plenty of quality winners including David Frost, Tom Lehman, Colin Montgomerie, Barry Lane and Jarmo Sandelin. The latter lifted the trophy in 2019 and is the long-standing reigning champion after Covid forced two cancellations and a tropical rainstorm forced a delayed 2021 edition to be abandoned. Asked how he might defend this week the enigmatic Swede said: “I don’t know because I can be very, good at the moment but I can also be very, very bad.” 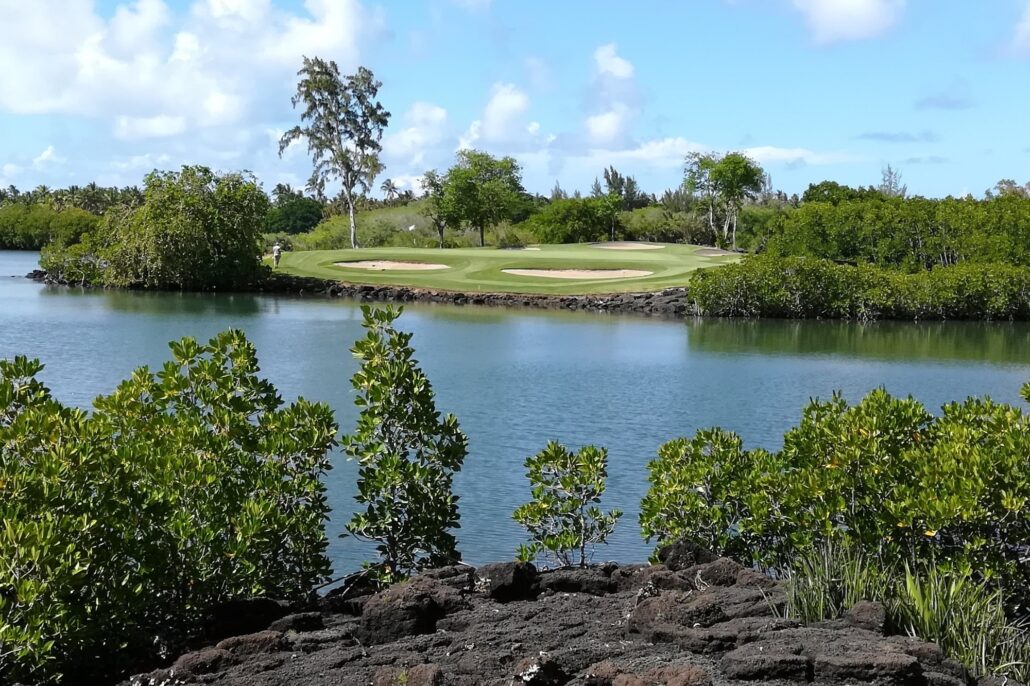 In his four visits to The Legend Course at Constance Belle Mare Plage Montgomerie never finished outside the top six and it makes plenty of sense because the layout is like a tropical version of Woburn, the English club Monty adores.

The fairways are tree-lined and the greens small so it absolutely plays into the hands of a superb ball-striker which again makes you think of Monty. Why did he only convert on of those good efforts in a win? Probably because a Mauritian Christmas is gloriously hot and he tended to get a little over-heated.

The weather means that most of the field enjoy flitting between the Indian Ocean, the resort’s swimming pools and the golf course so there is an end-of-school party feel. The greens are especially pretty at this time of year, framed by the red flowers of the flame trees – also known as Mauritian Christmas trees.

South Africa’s James Kingston leads the rankings and looks well set to lift the John Jacobs Trophy not least because he’s a past runner-up in this event. Paul Lawrie has won twice this season and Phillip Price once. Adilson Da Silva, the Brazilian who relocated to South Africa and spent much of his career on the Asian Tour, is going to be the Rookie of the Year and he is also hot on the heels of Kingston in second place in the standings.

Kingston has played 12 times in regular Legends Tour events this season and finished top 20 every time; his position at No 1 is no fluke. Price is a three-time top four finisher in Mauritius and Lawrie would have contended in his debut in 2019 had he not carded a clumsy 74 in the second round. Former winner Lehman returns but he hasn’t had a good year in America (and has had a knee replacement) while Thomas Bjorn admits that his time on the course recently has been “non-existent”. DaSilva’s arrow straight long game looks a great fit for the course and he might find himself with a clean sweep of titles come Sunday evening.