From learning to walk again to bombing it past Bryson: Penge's incredible road to The Open

Marco Penge spent the winter months learning to walk again and wondering when he might next pick up a golf club.

Six months later, he made his major championship debut in the 150th Open.

The Englishman was forced to pull the plug on his 2021 season when the pain in his right knee became too much to play through.

A long run of events in the UK and on the Challenge Tour had aggravated an old football injury, and an MRI scan revealed the need for surgery.

Before and after. Massively blister at the bottom of my fema all cleared up now. So hopefully that does the job 🤛🏻 pic.twitter.com/7NAPbd2yFM

Twelve weeks of rehab followed before Marco could get back to hitting balls again.

“The past seven months have been a lot tougher than I thought it would be,” Penge said in February. “It’s been an emotional rollercoaster.

“I was asking myself all sorts. Will I be able to walk pain-free again? Has my golf career finished because of an uncontrollable injury? What am I going to do? What I was born to do could be finished because of this. But, I’m back. The dream hasn’t ended yet.”

Penge returned to the Challenge Tour in March after eight months out, and it didn’t take long to blow away the cobwebs. An opening-round 65 at the SDC Open in South Africa kickstarted a week that saw him finish at 19-under-par and just two back of champion Clement Sordet. 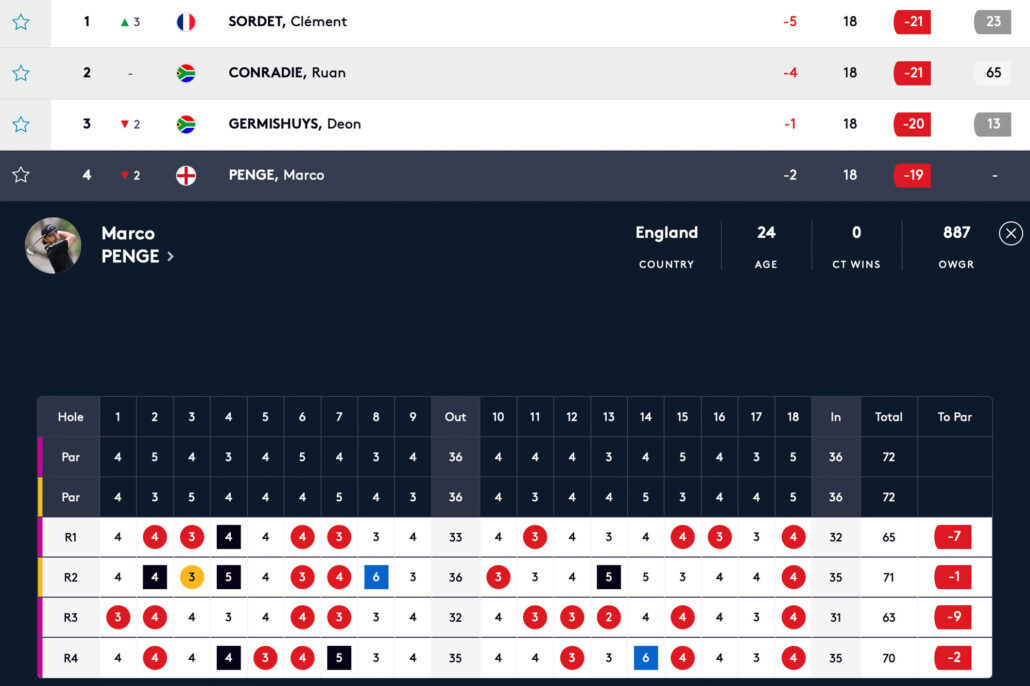 I caught up with his physio, Mike Murray, on the range at St Andrews.

“The first four weeks was working on lengthening soft tissues around the knee and muscles higher up the chain, into his back and hip on the right side, which had been compensating extra load for the knee,” he explained. “It was all about offloading and reactivating the area to get him back moving properly.

“From there we could get in the gym and start loading and make sure we had the strength levels to support him swinging a club again.

“Finally we could get into plyometrics and speed work to get him back to the level he need to be to compete. We wanted to take the physical aspect out of it so he can go out there and practice as hard as he wants and performance as well as the can without worrying about being in pain.”

And as if Penge’s remarkable recovery to qualify for The Open wasn’t enough, he has turned up to take on this famous Old Course packing some serious speed.

With 128 miles-per-hour of clubhead speed carrying the ball 328 yards, only two players have been zapped hitting further on the range this week.

Marco Penge with the 3rd longest drive of the day on the range. #MizunoSTZ220 #theopen @PengeMarco pic.twitter.com/8pdkR6pdh1

Step aside, Bryson DeChambeau, there’s a new bomber in town.

As for Penge, he remains more humble about his road to recovery and, indeed, this grandest of occasions.

“I’ve got great family and friends, and I love a lot of other things in my life. This is just my job and I’ve got to enjoy it while I’m doing it.”