It took more than a decade, but Lucas Herbert finally buried the hatchet with Phil Mickelson

Have you ever been swerved by one of your heroes? It happens to the best of us. In 2011, a teenage Lucas Herbert was denied an autograph from Phil Mickelson at the Presidents Cup.

Fast forward 11 years, and the two were paired together at The 150th Open.

“I had a laugh about this with Phil today,” Herbert posted on Instagram. “I reminded him that I hate him, and have hated him for 11 years as a result of him not signing the autograph for me.”

Playing along with the joke at St Andrews, Mickelson gifted his Australian playing partner the souvenir he craved for so many years.

“In the scorer’s hut, he grabbed a glove out and passed [it to] me,” Herbert added. “I’m going to frame this glove – it’s one of my prized possessions now!” 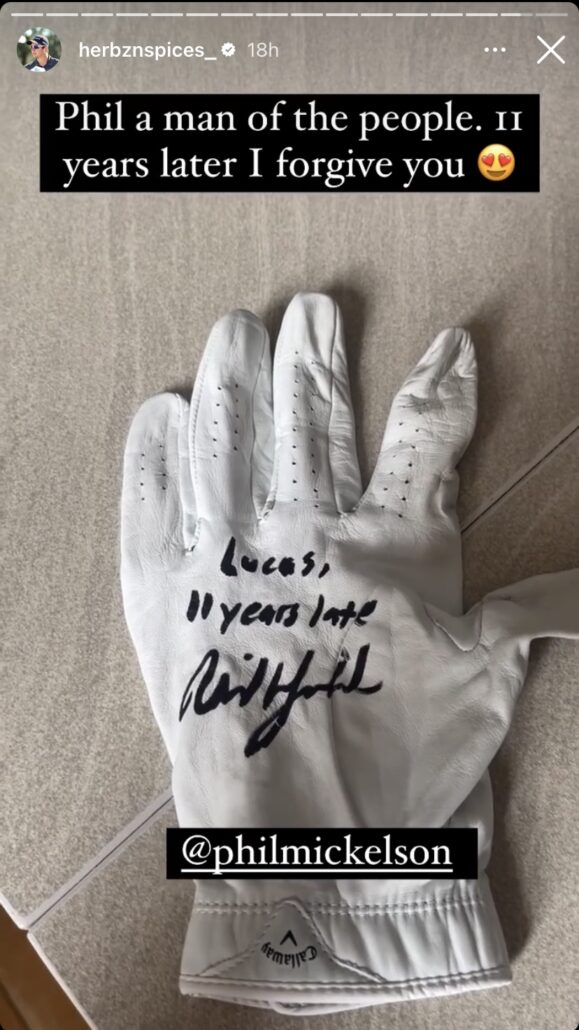 Good things do come to those who wait, it seems.

Moments later, Mickelson was in a less generous mood when asked – again – about his absence from the Champions Dinner at the beginning of the week.

The question had barely left the journalist’s mouth when Mickelson immediately shut him down.

“Let it go, dude. Let it go,” Mickelson said. “That’s three times you’ve asked the same question. I don’t know what to tell you. I couldn’t be happier.”

He added: “I think that I couldn’t be more excited and ecstatic with where I’m at. I love the events. I get to have competitive golf in my life on a scale that is fun, exciting, different, and lets me play and compete but still do the things outside that I want to do.

“I’ve got a nice trip lined up after this and things that I haven’t been able to do in the past.”

And once again for good measure: “I couldn’t be happier.”