Days after her own family called on her to quit golf, Chun is a major champion again

A week on from her sister pleading her to give up the game, In Gee Chun has lifted the KPMG Women's PGA Championship. Matt Cooper tells her fascinating story

The tough talkers like to suggest otherwise, insisting with proudly one-dimensional analysis that good people are weak in the heat of battle.

It’s the purest form of gibberish, one that ignores all examples of tough guys making an absolute shambles of winning opportunities as a direct consequence of their pig-headedness.

And then there is the third major championship victory of In Gee Chun’s career.

The 27-year-old South Korean enjoyed and endured an astounding KPMG Women’s PGA Championship at Congressional, first thrashing the field over the first two laps, then hanging on to the top page of the leaderboard like a climber with nothing more than one finger of her wrong hand in a hold, before finally coming good in a frantic final round of 3-over 75, sufficient for a one-shot triumph on 5-under 283.

This is a golfer who once noted that a caddie in her group had taken a shine to a local biscuit during a South Korean event and next day presented him with a retail-sized box of the same biscuits.

A golfer who, after she won the 2015 US Open, not only retained great affection for the host, Lancaster Country Club, she set up an Educational Foundation there to help caddies and children from the area.

A golfer who funds scholarships and university projects back home in South Korea.

A golfer who, even as she walked to the final tee with a one-shot lead, acknowledged the individual cries of support from the galleries.

A golfer who was deeply hurt and suffered from mental health problems when, as we discussed ahead of the US Women’s Open earlier this month, she was subject to internet trolling following the capture of her second major, the 2016 Evian Championship.

A golfer who, despite feeling extreme wariness because of those over-intrusive fans, refused to be suspicious of other supporters who lined the fairways during her last triumph on tour, at the 2018 Hana Bank Championship.

Those fans quite literally surrounded her at times that week, so much so that journalists and photographers were among those who had to link arms to provide safe passage from greens to tees, and yet Chun smiled, nodded or waved to pretty much every frenzied cry.

The impression she gave then was revived this week: with her upright stature, habit of straightening her back, the flapping hand wave and shy nod, she’s reminiscent of an elegantly-made marionette puppet.

There was no hand to guide her this week, however. Well, maybe caddie Dean Herden helped. This was a fourth major win for him alongside South Korean golfers and his second with Chun.

But he will readily push all the acclaim towards his boss and her brilliance began on Thursday with a first round of 8-under-par 64 that gave her a five-shot lead.

She gained an enormous 11.38 strokes on the field in that opener. To put that in context, Rory McIlroy’s opening 65 on the same course in the 2011 US Open was 9.11 shots better than the field.

A second round 69 stretched her advantage to six at halfway and she was still five clear with 21 holes to play whereupon she gave the field a boost with a clumsy double bogey-seven at the 16th and her pre-final round lead of three didn’t last long either after she made five bogeys in her first 12 holes (two of them on par-5s). The good news was that, Minjee Lee and Lexi Thompson aside, everyone was struggling.

The tournament ultimately turned in the very same spot it had started to go wrong for Chun 24 hours earlier – the par-5 16th.

This time she found the putting surface in three blows and then sat back to watch her playing partners Thompson and Hye-Jin Choi go one-for-four at hitting the green with shots from inside 40-yards. Trailing by one on the tee, she converted her birdie putt, had a share of the lead, and the die was cast because a flummoxed Thompson added bogey at the 17th.

Afterwards, she again rekindled memories of the 2018 win, referencing in a quiet and dignified manner the depression her form slump and the trolling had prompted.

“When I got a slump, some people said, ‘In Gee, you should retire.’ But no matter what they said, I believed I can win again,” she said.

Even in recent times she was struggling.

“This win is really special because I always said my depression is getting better,” she explained. “To be honest, when I’m not OK, I don’t want to make any worry for everyone so I just kept saying that I’m OK.

“Last week I talked to my older sister and I really cried. I said, ‘It’s really hard to stay in the US. I don’t know what I want to.’ She said, ‘In Gee, just quit golf, you’re the important thing.’

“When I heard what she said, I didn’t want to quit golf. I said, ‘In Gee, you still want to play golf.’

“So I tried really hard this week. I’m just so happy to make win after all that happened. I’m so proud of myself.

“I want to keep saying thanks to everyone who believed in me and never gave up on me.”

And the two runners-up? Minjee Lee closed with a second-best score of the day 70 for another stellar major championship finish, reiterating that she is in the form of her life.

Lexi Thompson did what Lexi Thompson does. She’s an extraordinary golfer, one who hangs like a willowy tree in a gale after many long shots and wobbles like one over short putts, yet she doggedly keeps coming back for more.

Her performance from the 14th to the 17th was like her career in microcosm: her length from the tee and height with her approach allowed her to be the only contender to have a birdie-putt at the diabolically difficult-to-hit 15th and she drained it, but either side she missed tiddlers and scrambled sloppily. 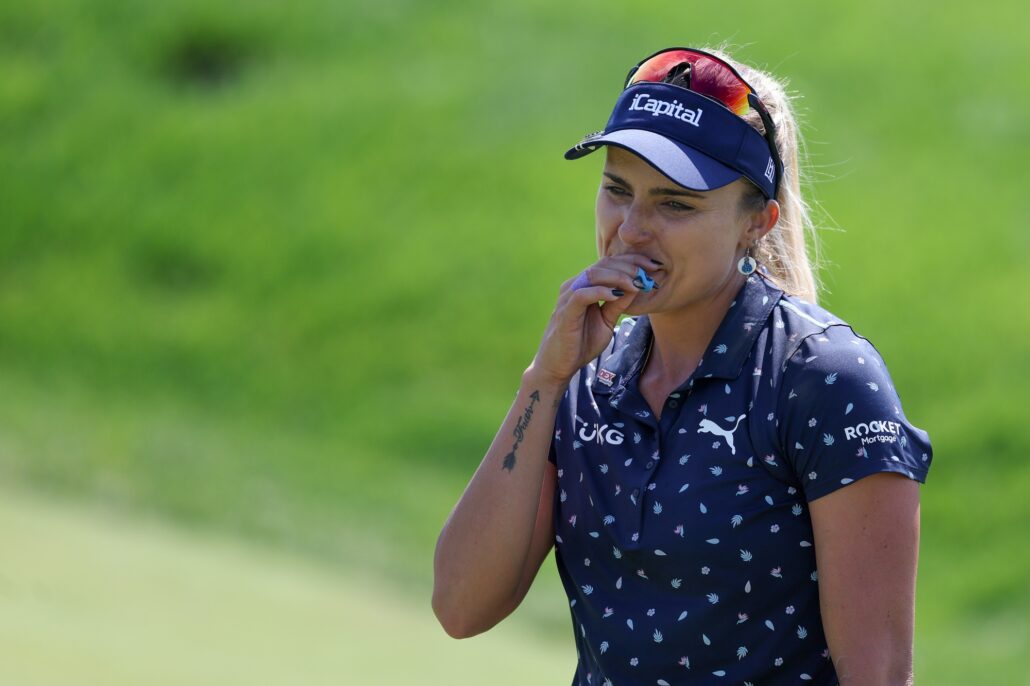 More major agony for the American then, but Chun’s triumph was entirely deserved and she joins Se Ri Pak and Inbee Park as the only South Koreans to have won more than two majors (of the 19 to have tasted success at the very highest level).

She’s some way off their tallies of seven apiece but it would not be outlandish to suggest that she can inch closer to them in the future.