A new year, a new ridiculous achievement that we can only sit back and admire. Here's the story of how 17-handicapper Rowan McCarthy won his first club title

Every now and then someone does something utterly absurd on a golf course and we really like to share those stories with you.

Who could forget Kevin Pon’s condor? Or Ryan Brookes’ frankly absurd round of golf at Whittington Heath? And then there was Matt Welsh’s hole-in-one story to end all hole-in-one stories.

Actually, that last one is pretty close to the story we bring you today.

Golf Australia shared this scorecard from Rowan McCarthy, who was knocking around the Tuart course at Wembley Golf Club in Perth. 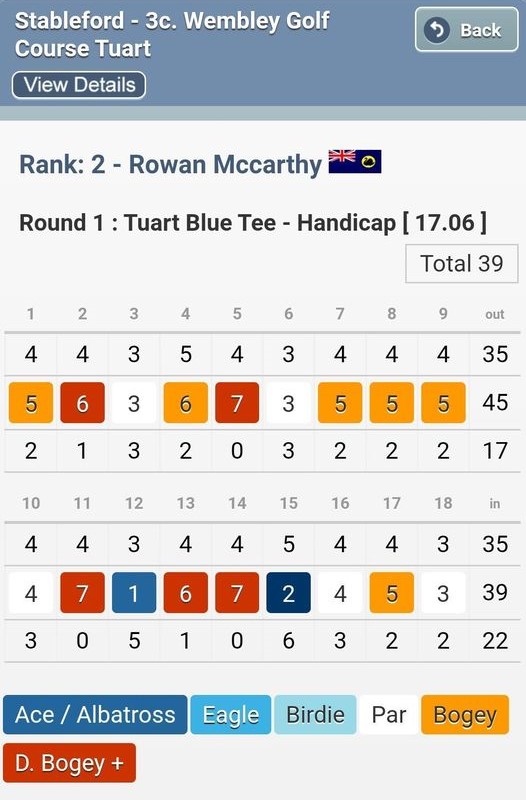 Rowan was having a typical round for a 17-handicapper – a couple of chest-beating pars mixed in with the usual bogeys and doubles and a triple.

Then, on the 175-yard par-3 12th it all changed when his 7-iron hoik bounded toward the hole and disappeared. “We all just started jumping up and down – I think the whole golf course probably heard us,” the Irishman told Golf Digest.

A double and a triple followed – anyone who has had a hole-in-one will tell you that’s completely understandable – before the par-5 15th. That’s when things really took a turn.

According to the Digest account, McCarthy, with a little more than 200 yards left, punched a 5-iron which bounded off a bank and kicked into the hole for an albatross.

“I’m really proud of it,” McCarthy said, presumably of the unlikeliest of pars at the 16th.

Unsurprisingly, those 11 points helped Rowan to a haul of 39 which was enough to win the Perth Golf Network event. One can only wonder what the Angry Club Golfer thinks about all of this…