Justin Thomas (or is it?) had an interesting day, Scottie Scheffler's up to his old tricks, and Shane Lowry fumes at the USGA. George Cooper wraps up moving day from Brookline

While the wind picked up and scores soared on day three at the 2022 US Open, the talking points certainly didn’t dry up in Boston. Matt Fitzpatrick was the hero of the day as he bids to make more history at Brookline, but what about the stories you maybe missed on moving day?

Willy Z on the move

Despite being in contention at EVERY major of late, Will Zalatoris featured criminally little during the opening two rounds of the US Open. But the man who just loves the big four couldn’t be ignored on day three as he went low to soar up the leaderboard.

Since bursting onto the scene in 2020, Willy Z has five top-eight and two runner-up finishes in seven major starts, but is now en course to go one better after carding an unparalleled 67 to climb to the top of the leaderboard alongside Fitzpatrick.

He’s won 15 PGA Tour titles, including two majors. He’s a Ryder Cup star, and one of the biggest names in the game. A relatively easy one for the first-tee announcer then, right? Well, maybe not. Here’s the PGA Tour’s newest addition getting introduced at Brookline…

The facial expression says it all 🤣 pic.twitter.com/IfrPiDbG6M

JT’s face said it all after the absolute clanger.

While the first-tee fluff didn’t put Thomas off, an incident on the par-4 4th soon did. After opting not to call an official over when his tee-shot pitched next to a drain, Thomas chunked his second and was NOT happy about it. Just check out this furious rant…

Who's taking a drop here?!

Justin Thomas was furious with where his ball came to rest in the fairway on the fourth hole 😮 pic.twitter.com/th6VU6KiJ5

Rattled by the incident, the PGA champ bogeyed two of the next three holes before carding a 72 on day three to sit at T25. Perhaps he’d now been wishing he was Justin Thompson after all.

Scheffler holes out for eagle (again!)

Not content with one shot of the day this week, Scottie Scheffler pulled off the feat again when he produced another sensational eagle during round three. Having chunked one on Friday to look somewhat human, Scheffler showed off his wedge play on the par 5-8th with a thing of beauty from 102 yards:

The incredible eagle catapulted Scheffler into a two-shot lead at the top, before Brookline’s back-nine got the better of the World Number 1 as he dropped four shots to fall to T4.

Another one straight out the ‘Tour Pros Are Just Like Us’ playbook. Xander Schauffele had a mare on moving day as he dropped seven shots on the front-nine before carding a 75. The rollercoaster round featured several relatable moments for the American, none more so than this whirlwind of a bogey on the par-5 8th…

Shane Lowry may have missed the cut at Brookline, but that didn’t stop him taking aim at the USGA on Saturday. In a sassy dig on Instagram, the Irishman called out officials for giving afternoon starters an unfair advantage by watering the greens late in the morning on day two: 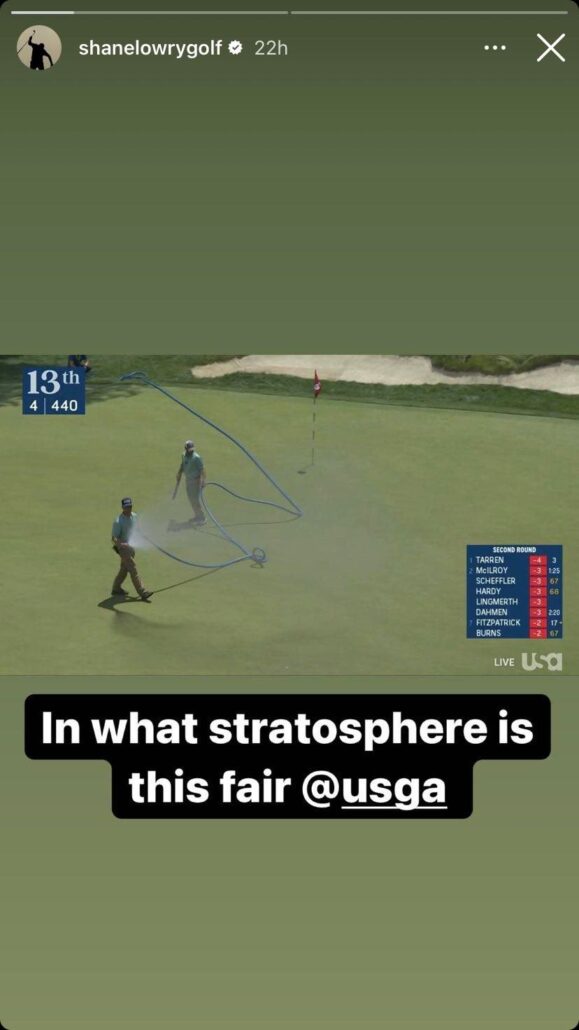 An unfair advantage? A new entry into the US Open’s most controversial moments? Shades of Shinnecock? Not quite. Sorry Shane, you just got the bad luck of the draw on this one.

Nothing will ever top those infamous Team USA outfits from the 1999 Ryder Cup at Brookline, but Patrick Reed gave it a pretty good go with this monstrosity of a shirt on Saturday:

Fans were freaking out on Saturday when a photo went viral exposing that the US Open has their own ‘official’ barber. And just before you jump the gun with a classic ‘I know a few players who could do with that’, allow one of our very own to beat you to it…

Right, a huge Sunday coming up. Get some rest, it’s going to be wild!